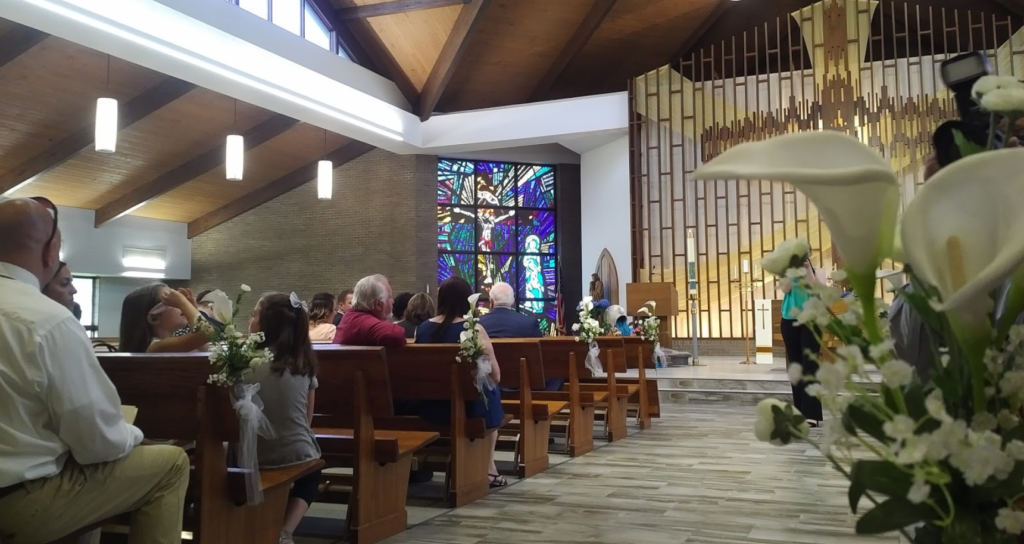 Deacon Bob Grgic, pastoral associate of St. Gabriel Parish in Concord, Ohio believes The 99 Mission Series is an incredibly effective way to reach the fallen away Catholics of his parish, while also getting those involved even more involved. Here are some ideas he shared on how to incorporate The 99 into parish life.

We paid three hundred dollars more or less for all The 99 materials, but I would have paid that much for just the thirteen-minute “Hiding” video. That was absolutely incredible. We use that video with our second-grade parents for a reconciliation retreat. We’ve used it also with our Alpha course follow-up group, and then we’re going to be using The 99 as our parish mission.

We’ll be using the series really in two ways. We’re going to use The 99 Masterclass for our evangelization group, our Evangelization Commission, and also for our parish leaders. Then we’ll be using The 99 Experience for our parish mission. We’ve run Alpha for a year or so, I think we’re four courses in, and my hope was to run The 99 Experience similarly to Alpha, but there wasn’t enough room in the parish meeting rooms, so we’re going to run it in a large group format in the church.

Would you have preferred to have been able to use it in a small group context?

We still could have. We’ve been running our Alpha groups at about 100 people or fewer. Usually, we have about seventy. So we are hoping to do it in that format where we’d have like ten tables of seven, but we didn’t have the space so we’ll start running [The 99 Experience] in a large group format with partner sharing in the church.

Are you using The 99 Masterclass to train your evangelization team and your parish leaders in anticipation of running the parish mission, or are they sort of two separate tracks?

We’re going to run [The 99 Masterclass] as training for the parish mission, but also I think it does a really good job of helping the parish leaders understand what evangelization is. I loved the bullhorn story in one of the Masterclass videos. It’s very concrete about how we can share our story without the bullhorn.

We had the evangelization committee, which is about thirteen people, look over The 99 Masterclass before we decided to implement it. Their reactions were very positive, and that was my real hope because we wanted something to help them find a different way to share the gospel, and it does. It absolutely does.

You mentioned that you are using The 99 with your Alpha groups. Do you see it working well alongside an Alpha course? Do you see it as something parishes that are already implementing Alpha can use without being redundant?

I don’t think it’s redundant. I think it takes it to the next level. I think The 99 is a great next step for the people who have gone through Alpha and want to take it a step farther, so that’s where I would see us using it too.

Alpha also does a really good job with training the table hosts, but I didn’t see a good Catholic parallel to it, and I think The 99 Masterclass follows up with the Alpha training really well.

It is good to hear that The 99 Masterclass resonates well from an introductory standpoint to evangelization, but also takes it to the next level.

Yes, I thought it was really well done and I loved the fact that as a whole The 99 isn’t too intellectual. I think you guys did a good job keeping it so that normal people can relate to it with presenters like Mark Hart and the others.

And they’re short. They aren’t the hour-long or half-hour long videos you often see with other programs. I thought the length of the video was just long enough to promote discussion.

I also liked the fact that you could pull out bits and pieces, which was really helpful, like [the short film] “Hiding”. We’ll be using “Hiding” a lot because it’s just that good. The profound part was it didn’t mention God at all. Now I’ve seen it like twelve times, so I’ve noticed there are Catholic things in the background, but the fact that there is no mention of God made it hit our parents that don’t come to church as often as we hope in a way that a homily couldn’t or a Sunday Mass couldn’t, because it hits them on the human level first and then takes them to the level of God. I thought that was really strong.

I thought all the videos in The 99 Experience were all very concrete. I love the guy with the tattoos, Bob Lesnefsky. I think it did a really good job of showing normal people telling their stories, and then you also have priests and a nun, but they are also very relatable. No one was speaking down to people. I want to see what happens when we get to first reconciliation and what impact it has on the parents. Will they have a better reconciliation experience when they go?

What has your parish’s response been so far with using The 99?

Overwhelming. There’s always this dead silence after the videos, and I usually ask them to do some kind of a journal question, because you can’t just come out of that and go right into talking. Probably about a third of people have tearful responses.

We asked the parents afterward, “What was your reaction to the videos” and a lot of people said they’re going to “take more time to be with their family,” or “relationships are more important than things.” They were just very profoundly silenced right afterward, but everybody had some story that related back to coming home or hoping they could create an atmosphere where their kids would come home, so I was just really blown away.

Did you run into any challenges with the implementation of the program, or with any part of it not working the way you had hoped or expected?

I realized we had to use the questions [in The 99 Masterclass Guide] on a PowerPoint, and it would have been nice to have them available as some sort of additional handout. I know the vision is for people to answer them in a small group or in a journal, but then we have to retype the questions into a PowerPoint which is no big deal, but it’s just one more step.

Also, it took me a while to figure out [The 99 Handbook] because I thought it went along with the video series, but it seems to be the continuation of The Experience for follow up afterward.

Otherwise I thought Ascension did a really good job with having the large group format, small group format, and individual format [in the Masterclass Guide]. I was really impressed with how you’ve given a lot of,  “if your group is like this, try this” options, so the modularity of the program is great. It took a little bit of reading through the whole thing to kind of get the big picture, but it was totally worth it.

Thank you so much for all this feedback. This is definitely going to help us improve and continue to make sure we’re meeting the needs of parishes like yours who are already doing evangelization ministry, and hopefully helping others to get started with their own evangelization ministries in the future.

Thank you for all you’ve done, because in ministry when you can move people’s hearts. That’s the goal, and watching people respond to this material has really been very positive.

How Mater Dei Parish in Sioux City Implements The 99 Mission

Natural Happiness: A Philosophical Approach to Evangelization [Every Knee Shall Bow Podcast]

Matt Pirrall is a filmmaker and photographer based in West Chester, Pennsylvania and has been producing video series for Ascension since 2015. The programs he has produced include The 99, the Rejoice series, The Ascension Lenten Companion, Joy-Filled Marriage, and numerous videos for Ascension Presents. Matt is passionate about sharing the truth through the lens of beauty, and has been blessed to be able to collaborate with many gifted people in that pursuit.