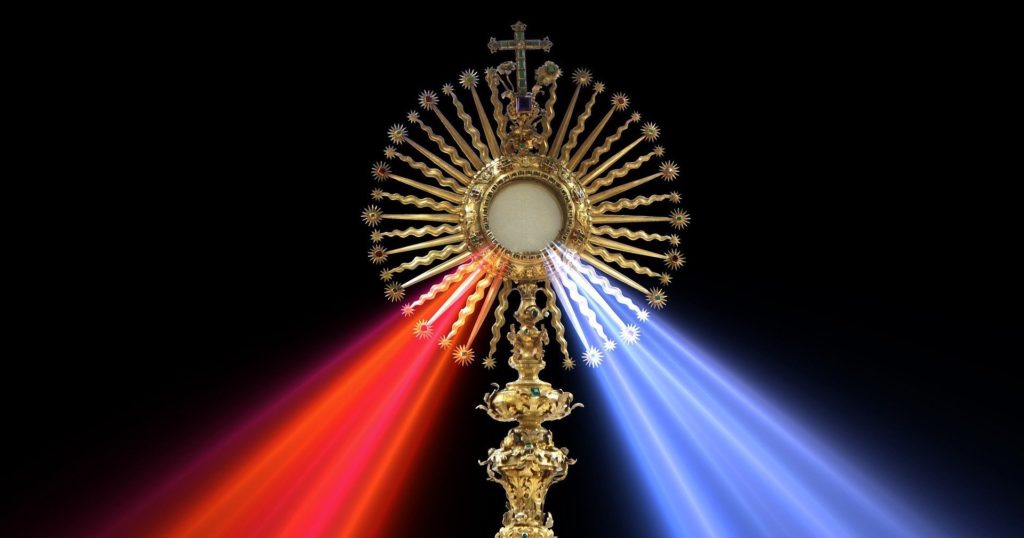 It is hard to imagine how St. Thomas must have felt when the other apostles told him they had seen Jesus, risen and alive. His reply in John’s Gospel sheds some light on the anger and hurt filling his heart, as he stubbornly protests believing in Jesus’ resurrection until he could see and touch the wounds from the crucifixion. The week he spent wrestling with his own heart, and the testimonies of the other apostles, perhaps wore down his stubbornness enough so that he was present the following Sunday when Jesus appeared again. He would not have remained with the apostles if he absolutely refused to believe. Somewhere in his heart, he was still hopeful.

Isn’t that the same for all of us, especially when we are faced with the crosses of life? Suffering can be downplayed or dismissed, but there is nothing simple, easy, or glamorous about it, no matter what it is. There is true ugliness in our world and we all have come face to face with it, in one way or another, but even in our moments of deepest agony or turmoil, there is something in us that still clings to hope.

It is in this place that St. Thomas encounters the Risen Lord. Jesus could have appeared to St. Thomas and berated him for his unbelief, possibly sending him away from the apostles for his hardness of heart. But, rather than exercise Divine Justice—which is Jesus’ right as God—Jesus abundantly pours Divine Mercy upon him. Jesus instructs Thomas to touch the wounds of the crucifixion, to touch the nail marks and place his hand in Jesus’ side. Beyond proving to Thomas that he did indeed rise from the dead, Jesus is meeting Thomas in his suffering of disbelief, confusion and pain, and showing Thomas that he has taken that suffering upon himself. Jesus knows his pain intimately and has not dismissed it or punished Thomas for it. In making it his own, Jesus recreates Thomas’ heart, filling him with new life.

This encounter between Jesus and St. Thomas is most fitting for the feast of Divine Mercy. This feast is quite new for the Universal Church, as it was inaugurated on the canonization of St. Maria Faustina on April 30, 2000. St. Faustina was a Polish religious sister who received many revelations and commands from Jesus to spread devotion to Divine Mercy. The famous painting of Jesus with white and red rays coming forth from him, with the inscription, “Jesus, I trust in you,” was painted from a vision St. Faustina received. The Chaplet of Divine Mercy and the feast itself were both requests from Jesus to St. Faustina. His words and the beautiful story of her life are recorded in her Diary, which is worth reading many times over. St. John Paul II canonized St. Faustina and was deeply devoted to spreading the message of Divine Mercy.

The celebration of the feast of Divine Mercy as the culmination of the Easter Octave is not to be overlooked. Easter is the highest-ranking feast of the year, the holiest feast. It is so holy that it takes us eight days to fully celebrate the glory of this one day. And, as the crown of the octave, stands the feast of Divine Mercy. Jesus desired to make abundantly clear that he died out of love for us, and he will stop at nothing to shower that love upon us. He says to St. Faustina:

“If souls would put themselves completely in My care, I Myself would undertake the task of sanctifying them, and I would lavish even greater graces on them. There are souls who thwart My efforts, but I have not given up on them; as often as they turn to Me, I hurry to their aid, shielding them with My mercy, and I give them the first place in My compassionate Heart.”

The interaction between Jesus and St. Thomas is brought to life with these words. Jesus showers Thomas with mercy and even greater graces than had he first believed. This is hard to comprehend! How is it that God, who is perfect, can be just and superabundantly merciful?

To answer that question theologically would take some time. However, in our moments of guilt and shame, when mercy is extended to us through Jesus’ victory over death, we are not asking a theological question. In those moments, our hearts are asking how it is possible not to burst out of love of such a gift. How can it be that God does not erase the past, but recreates it in such a way that blesses us, even though we were the sinners? An example will help illustrate this sentiment.

Think of something in your past that you deeply regret—something that, if time machines existed, you would go back and change. While thinking about this moment, imagine that Jesus meets you in your moment of greatest shame or guilt. Do not imagine that he says to you, “no big deal, I forgive you,” or “I’ll just overlook that.” No, instead imagine that he says, “I know the pain this has caused you because I have made that pain my own. See and touch the nail marks in my hands and place your hand in my side. I know how much this hurts you.” Knowing our pain intimately, he says, “I want to give you my life so that these wounds do not keep you from me. These wounds have drawn me close to you and I seek to recreate your heart in love so that you can never be separated from me again.” That’s unfathomable Divine Mercy.

Perhaps you pulled back from Jesus’ offer like St. Thomas did when the apostles told him Jesus had risen. Perhaps it is too much to think that Jesus could or would do something like that. It is! That is why his death and resurrection are unthinkable. That God would die for a sinner is unthinkable. However, in his mercy, he promised to do this from the very first sin. In the Garden of Eden, he encountered Adam and Eve in their guilt and said to them:

“I will put enmity between you and the woman, and between your offspring and hers; they will strike at your head, while you strike at their heel.”

Charming. As strange as this verse sounds, it is in God’s punishment—his act of justice—of Adam and Eve for eating the forbidden fruit that he promises to save them. The Fathers of the Church have interpreted this verse as the protoevangelium, or “the first gospel.” This is the first promise in Scripture of a savior. God is saying here that the offspring of humankind, of which God became, will strike the devil and defeat him.

My Lord and My God

God’s plan from the beginning was for all of us to be in communion with him. Our sin did not thwart his plan. Rather, it allowed for God’s mercy and love to be known in greater depths than ever imaginable. This is not to say that God uses our sin to show his love, or that God erases our past as if the suffering did not matter. The suffering mattered, and he felt it on the Cross, and we can unite our suffering to his to find the strength to bear it. Suffering can only be redemptive because Jesus overcame it.

God does not use us. If he wanted to use us, then he never would have given us free will and sin would not exist. We would operate more like robots or computers rather than human beings. God cannot be a loving, merciful God if he uses his creatures because true love is given and received in freedom. Being forced to love someone is not love, it is servitude. Therefore, God does not use our sins because he loves us. Rather than using it, he chooses to meet us in the suffering caused by our sin and bear the suffering with us. Isn’t that the mark of true love, when someone sits with you in your darkest moments rather than leaving you for someone more fun? And going even further, rather than allowing our sin to destroy us, God recreates us in his new and resurrected life. This is mercy—to give beyond what is deserved. We only deserve God’s justice, and he cannot help but shower us with his mercy.

“Here is the Son of God, who in his resurrection experienced in a radical way mercy shown to himself; that is to say the love of the Father which is more powerful than death. And it is also the same Christ, the Son of God, who at the end of his messianic mission—and, in a certain sense, even beyond the end—reveals himself as the inexhaustible source of mercy, of the same love that, in a subsequent perspective of the history of salvation in the Church, is to be everlastingly confirmed as more powerful than sin. The paschal Christ is the definitive incarnation of mercy, its living sign in salvation history and in eschatology. In the same spirit, the liturgy of Eastertide places on our lips the words of the Psalm: “Misericordias Domini in aeternum cantabo.”

It is when we have opened our wounded hearts to the merciful heart of Jesus and received the unfathomable gift of his resurrected life, that we can exclaim with St. Thomas, “My Lord and my God!”

How We Participate in Divine Mercy

Divine Mercy (podcast from Abiding Together)

The Essentials of Divine Mercy with Father Chris Alar, MIC

Caroline Harvey is the associate communication director for the Archdiocese of Milwaukee. Prior to working at the archdiocese, Caroline worked in various ministry positions throughout southeast Wisconsin, focusing on teaching and discipleship. She is currently pursuing a doctor of ministry degree in liturgical catechesis from the Catholic University of America. She has a master of arts degree in biblical theology and a bachelor of arts in communications media from John Paul the Great Catholic University.