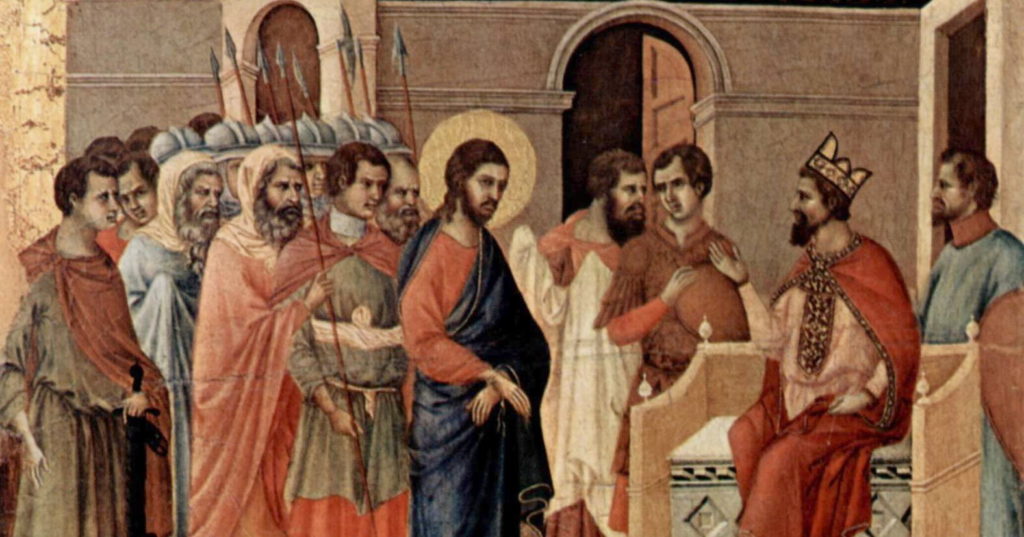 In John’s Gospel, chapters 18 to 20 poetically describe Jesus’ passion. I say poetically because John’s writing is highly symbolic, as he carefully constructs his Gospel to manifest Jesus’ divinity. Each chapter reveals specific aspects of Jesus’ divinity, with the crucifixion and death of our Lord as the climax of that revelation.

It might be surprising to think about the Passion as the most climactic way to reveal God. Crucifixion is the epitome of defeat, humiliation, and torture. The Romans considered it a method of punishment too degrading for Roman criminals, who instead would be put to death by beheading. Anyone put to death by crucifixion suffered not only physical agony but also the agony of degradation. They died, in essence, no longer human. And St. John uses this image to reveal Jesus’ divinity.

To understand this, let us begin with chapter 18, in the Garden of Gethsemane. When Judas and the soldiers come to arrest Jesus, they fearfully ask him if he is “Jesus the Nazorean.” Without hesitation, Jesus replies, “I AM.” Note here that Judas and the soldiers were looking for a man, Jesus of Nazareth, and Jesus responds using the same response God gave when Moses asked for his name. Jesus identifies his humanity with God—I AM WHO AM, (Yahweh). What happens next is something I glossed over for years, but it is truly amazing. John said that when Jesus replies, the group of soldiers “turned away and fell to the ground” (John 18:6). Jesus revealed his power and divinity to these men, they recognized it, and they fell down in fear.

Later in chapter 18, during Jesus’ trial, Pilate asks him if he is the “King of the Jews” (John 18:33). Pilate is willing to recognize a worldly title for Jesus, but he does not question Jesus about his claim to be God. Once again, Jesus identifies his humanity, accepting the human title of “king”, but he does so by explaining his kingdom is not of this world. The truth he came to testify about is of his divinity. Pilate replies, “What is truth?” He is consumed by fear of the Jews and of losing power, and he fails to accept Jesus’ divinity.

Now condemned to death, Jesus hangs on the Cross between two criminals, with the inscription of his crime above him:

“Jesus the Nazorean, the King of the Jews.”

In twenty unemotional lines, John describes Jesus’ death. His intention here is not to invoke emotion, but rather to show how Jesus’ death accomplishes his earthly mission and fulfills the Scriptures. This man, the King of the Jews, is also the Paschal Lamb, the Suffering Servant, the Messiah, and the Son of God.

After Jesus dies, his side is pierced with a lance to verify that he has in fact truly died. While St. John uses this moment to point to the sacraments of baptism and the Eucharist by mentioning the blood and water that flowed from Jesus’ side, he is also very practically telling us that Jesus, the man who is God, died. St. John writes:

“They will look upon him whom they have pierced.”

Here, he references the bronze serpent the Israelites looked upon for healing (see Numbers 21:9) and the prophet Zechariah, who foretold of mercy and supplication poured upon Israel as they looked upon the one whom they have thrust through (see Zechariah 12:10). The full impact of this statement is not understood until reading St. Thomas’s encounter with Jesus.

After the Resurrection, when Jesus first appeared to the disciples, St. Thomas was not present. Upon hearing the news, Thomas also doubted their claim that they had seen him, saying:

“Unless I see the mark of the nails in his hands and put my finger into the nail marks and put my hand into his side, I will not believe.”

Remarkably, much of Thomas’ obstinacy was seen previously in the description of the arresting soldiers, Pilate, and the Jews who asked for Jesus’ death. Thomas is unable to accept the power of Jesus’ divinity—rising from the dead and appearing to the disciples—just as the soldiers fell, the crowd mocked, and Pilate questioned the truth. For proof, Thomas asked to see Jesus’ humanity—the wounds of the Crucifixion.

And Jesus offers his wounds to Thomas. Thomas feels the nail marks and puts his hand in Jesus’ side. Thomas encounter’s Jesus’ humanity through his own, and it brings him to his knees. Thomas exclaims, “My Lord and my God!” (John 20:28). He recognizes and accepts Jesus’s divinity through his wounds. Jesus replies, “Blessed are they who have not seen and have believed” (John 20:29).

An Invitation to Faith

How often do we think, “If only I could have witnessed the Resurrection or one of Jesus’ miracles, then my faith would be stronger.” And Jesus is actually refuting that—which St. John magnifies through his description of the Passion. We did not have to be present at the Cross to know what Jesus’ wounds looked like. His wounds are our own. What we hide in the secret recesses of our hearts—our mistakes, our greatest causes of shame and fear, our deepest hurts—Jesus displayed publicly on his body. He hung on the Cross bearing everything that makes us degraded, our sins and wounds. And we look upon him whom we have pierced whenever we face those sins and wounds.

Like St. Thomas, most of us need to explore our wounds in order to have them healed. When we turn away from God in fear, obstinacy, or unbelief, it is usually because we cannot bear the wounds inflicted upon our hearts. But, as St. John beautifully described, when those wounds are encountered in and through Jesus “mercy and supplication is poured out”, healing is experienced, and with profound faith, we can exclaim with St. Thomas, “My Lord and my God!”

How to Offer Jesus My Passion

Preparing to Participate in Christ’s Passion This Lent

Your 40 Days in the Desert with Jesus

A Guide to the Passion: 100 Questions about the Passion of the Christ [book]

Caroline Harvey is the associate communication director for the Archdiocese of Milwaukee. Prior to working at the archdiocese, Caroline worked in various ministry positions throughout southeast Wisconsin, focusing on teaching and discipleship. She is currently pursuing a doctor of ministry degree in liturgical catechesis from the Catholic University of America. She has master of arts degree in biblical theology and bachelor of arts in communications media from John Paul the Great Catholic University.