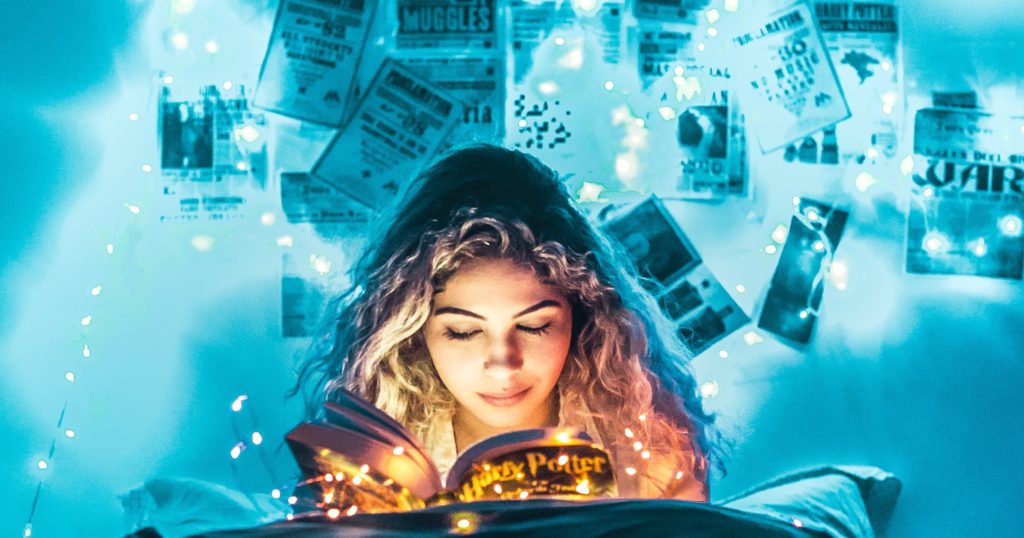 The last decade will undoubtedly be remembered for its fascination with fantasy fiction, and in a world facing the turmoil ours saw in the 2010s, this does not seem in the least bit surprising. The beauty contained in well-written fantasy gives us so much of what our souls crave. A careful Catholic, however, might meet this decade’s best-selling novels with a wary eye, as such sweetness can create the most appetizing place to hide a bit of poison.

More and more studies show that Americans suffer from an ever-increasing experience of isolation. Our hearts rebel against this because somehow we know we are not meant to be alone, and that together, we are called to be of service to something greater. Perhaps art’s greatest power is its ability to make us experience the truth that we are not alone, and the draw of the fantasy novel is to make us feel part of an epic and noble struggle.

Therein lies the potential for great good! The more powerfully beautiful the art—the more creative, well-crafted and engaging in an aesthetically wondrous world of emotionally fascinating characters—the more possibilities for good it holds. We love to immerse ourselves in such worlds, and when these worlds use beauty to lead us to good and good to lead us to truth, then doing so can fortify us spiritually.

My best friend is on a Tolstoy immersion streak right now, and because of it, she always has some helpful and holy insight to share from this character’s actions or that. My friend’s reading binge, in fact, is an exercise in the virtue of eutrapelia, or right recreation. Every virtue is found between two extremes, however, and this decade has seen many sway toward the extreme of indulgence and even obsession. What about this decade’s novels has engendered it?

To use an example from the 2000’s that still finds its way into the 2010s—and perhaps even formed this decade’s literary appetite—have you ever tried to mention to a Harry Potter fan that the story’s inclusion and glamorization of the occult is potentially dangerous? You’ve probably encountered not just a thoughtful consideration or rebuttal of your argument, but something more full of hurt and even rage, as though you had said something disparaging about a fan’s own family and friends rather than fictional characters.

I suspect that is because to an immersed reader, you have. Novels, especially fantasy series, feed one of our deepest needs by making us feel as though we are a part of a great story, and in it have real relationships with characters who are on our side. It is a “fix” for an isolated soul, but not a true one. It does, however, engender a loyalty that can be troublesome, as once we warned our children not to follow what “the gang” at school did merely because they belonged.

Now, because fewer and fewer of us feel we do “belong,” the fantasy novel holds similar power. Authors can use their artistic sway to lead us where they will. And those authors, unlike Tolstoy, may or may not be in touch with an artist’s spiritual responsibilities to his audience.

Editor’s note: The content below is full of spoilers pertaining to the past decade’s best-selling novels, and alludes to explicit content in said novels. This is unfortunately unavoidable given the subject matter. Readers’ discretion is advised.

Certain things sell, and it’s hard for today’s best-sellers not to make use of them. More specifically, sex sells. By an unimaginably wide margin, the most popular novel of the 2010s was Fifty Shades of Grey. Its two closest competitors in sales were its two sequels.

This shouldn’t surprise us given the addictiveness of the poison of pornography. It as if the market permitted crack cocaine as an ingredient in Coca Cola. It would certainly outsell Sprite, with its most exciting ingredient of lime. It would also pose health risks to its consumers.

Apparently, they don’t. They buy it instead. What does this tell us about the addictiveness of this particular poison?

How We Got Here

I believe The Hunger Games initiated the past decade’s obsession with fantasy. Like all of the works to follow, The Hunger Games was a compelling series, not a single book, which I think points to our need to feel continually immersed in a world of friends. Its author, Suzanne Collins, identifies herself as Roman Catholic. I would argue that her work did the least damage in terms of leading to the Fifty Shades phenomenon.

You can hear echoes of Ms. Colin’s Catholic Faith in the critical choice that underlies the action of the novels—that of a young woman to offer herself as a sacrificial victim (to the government of a dystopian society) in place of her sister. This is a laudable undercurrent to be moved by and, despite the books’ other issues, which include the glamorization of suicide and featuring revenge as a heroic motive, that underlying beauty remains.

The Divergent series contains many ingredients which were unique when they first appeared in The Hunger Games. Like The Hunger Games, Divergent is targeted to young adult readers and features a female teenage protagonist fighting against a dystopian future society. The series even uses The Hunger Games’ unusual employment of the first person present tense for storytelling, making the reader feel “right there.” Also, like The Hunger Games, self-sacrificial bravery is modeled as a heroic virtue.

The difference? Divergent, despite its intended teen audience, uses as much sexual imagery as the genre will permit. While teen characters do not commit the act, there are countless descriptions of their physical involvement—for example, where they place their hands beneath one another’s clothes, and so on.

Anyone who was or knew a teenage or twenty-something girl in the 2010s will know where they stood on the debate regarding which love interest Bella should choose. They were either on “Team Jacob” (the werewolf) or “Team Edward” (the vampire). Ultimately, Bella chooses Edward, but promotions featuring the shirtless and impossibly buff Jacob were everywhere (as clothes pose practical difficulties for werewolves, it seems).

Again we have a novel where the sacrificial bravery of a teenage girl is celebrated. Instead of another dystopian future, Twilight places us in a world where characters associated with the occult are given warm and appealing personality traits. The vampires are vegetarians, for instance, but still give their souls to demonic overlords, presumably for very nice reasons.

Edward and Bella initially can’t commit the sexual act, not because of moral reasons but due to an incompatibility between vampire and human physiology, which is eventually overcome after their marriage. (Yay?) Therefore, the majority of the novels are made up of lingeringly tense descriptions of all the things they can do.

In fact, if an author’s goal is tantalization, and to lead the mind, that’s a far better way to accomplish it than putting a plain description on page one.  Authored by a Mormon, the novels quite scrupulously do not feature drinking or smoking. What influence might such an author have if the novels did not feature eroticism?

A Game of Thrones (A Song of Ice and Fire)

George R. R. Martin’s series is the 2010s epitome of wondrous world building. These are the novels on which those who might have enjoyed the earlier series as young people have landed as adults. And they are beautiful. That’s their danger.

In them, one can get lost in the artful description of what was set out at a meal as much as they can in the fascinating building of a character whose experiences rivet the mind. In Martin, I believe, God has created an artistic talent with the weight to quite powerfully influence the world.

Like a person who is first given an addictive drug in an attractive context, soon we forgo the context to consume the drug directly. I suspect this progression is how one finds themselves hungry consumers of stories like Fifty Shades, in which the content is not like anything a George R. R. Martin could build.

An Inspiration and a Call

I know that I chose a topic that could evoke some very passionate responses. Why? Because novels can draw us into an experience that keeps us from feeling alone, and our God-given nature and search for him attaches us to that feeling greatly. To say anything critical of a story to someone who finds deep consolation in delving into the lives of its characters—and gives them a feeling that they are somehow part of those lives—is to threaten their very sense of belonging.

Why not take up our faith with the same passion many of us give to fantasy? Because it demands from us some minor sacrifice? That sacrifice is exactly what we admire in the characters that attract us, and we have supernatural help better than the stuff of novels to accomplish it!

If the power of the novel and the talent of the author played a part in creating our situation, then it is also that power that can help free us. I am inspired by the work of a young nun who, before entering Carmel, produced a stunning quantity of beautiful, compelling, and deeply Catholic fantasy.  A link to Sr. Loretta Maria’s novels is here: Loretta McKee’s Books and Publications Spotlight

If work like hers can help turn the natural longing of souls for beauty and belonging toward the true adventure that awaits them, can yours?  If God has given you the talent to write, and a heart to understand the responsibility to souls your gift conveys, consider how much the world needs you! Let’s see some gorgeous Catholic fantasy fiction following Sr. Loretta Maria’s example!