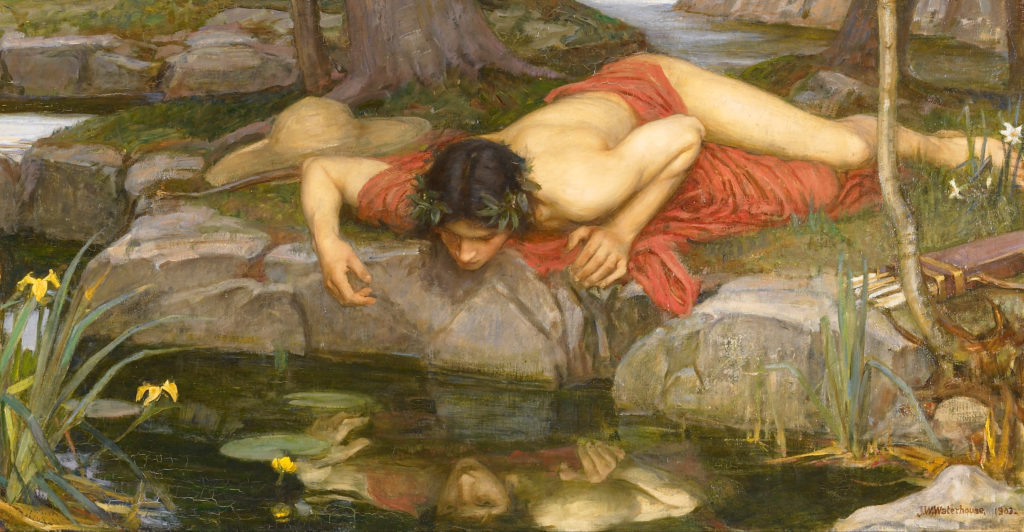 In many lists of the deadly sins, vanity is included within the sin of pride. However, some scholars—including the originator, Evagrius Ponticus—kept it separate due to its difference from pride’s lust for power and dominion.

Though the cause of vanity and pride is the same (ego-centricity), their effects and manifestations are different. In general, “vanity” refers to an excessive self-love and/or an excessive desire to be loved, admired, or recognized by others. If vanity grows uninhibitedly, then one seeks to become the central focus of attention in other’s lives. If allowed to reach its “fulfillment,” it leads to a self-idolatry that replaces God and family.

In the Bible, the English word “vanity” frequently means “futility” (i.e. transitoriness, passing away, or fading away). This is not what scholars intended in the original lists of the Deadly Sins. They meant “vainglory”—a belief that one deserves to be admired because of one’s perceived superior beauty, status, or talent.

This is translated in New Testament Greek as “kenodoxia”—which literally means “empty glory.” If glory is the object of admiration and awe, then vainglory is the belief that one be admired for a false reason—that is, admiring an empty object of glory.

As with other deadly sins, particularly greed, lust, and pride, vanity has an addictive quality that impels its victims to seek greater and more rapid fulfillment until it strains the limits of even the most beautiful and popular individuals.

The vanity of Narcissus who loved his own image

In classical literature, Ovid’s “Metamorphoses” provides an example of one who seeks vainglory in his character, Narcissus. In fact the word “narcissistic” comes from the myth of Narcissus who fell so deeply in love with the image of his reflection that he lost interest in all other dimensions of life.

Throughout the story of Narcissus, there is an undercurrent of darkness, emptiness, self-delusion, and impending doom. Ovid describes how Narcissus, in his pride, scorns many wooers. In vengeance, the scorned wooers pray to the gods that Narcissus feels the sting of unrequited love as they have. Thus, in answer to these prayers, the gods send Narcissus to a shaded grove with “a silver clear fountain.”

When Narcissus sees himself for the first time, Ovid writes:

“How often he gave his lips in vain to the deceptive pool, how often, trying to embrace the neck he could see, he plunged his arms into the water, but could not catch himself within them! What he has seen he does not understand, but what he sees he is on fire for, and the same error both seduces and deceives his eyes.”

Narcissus is then left alone in his vanity and nearly withers away, until Echo, one of his scorned lovers, has pity on him and turns him into a flower (a daffodil, which belongs to the family of Narcissus flowers).

Narcissus, by the standards of ancient Greece, could have lived a full and virtuous life, but he chose to find glory in his own reflection and thus lived and died alone in vain.

A vanity that destroys: Dorian Gray

The Picture of Dorian Gray provides another clear example of vanity in literature. In the character of Dorian, Oscar Wilde presents a man who “sells his soul” to a painting because he wishes to remain young and beautiful forever. Thus, the painting ages while Dorian himself remains young and handsome.

At the very thought of aging Dorian reflects:

“As he thought of it, a sharp pang of pain struck through him like a knife, and made each delicate fiber of his nature quiver. His eyes deepened into amethysts, and across them came a mist of tears. He felt as if a hand of ice had been laid upon his heart.”—The Picture of Dorian Gray

However, Dorian’s wish for vanity leads him to commit a multitude of other sins. What started out as a wish to remain young and beautiful forever ends in betrayal, loneliness, and death. The women around him all seem to lose their reputation, and the young men around him kill themselves. Dorian can no longer take the sight of the old decrepit painting, thus he stabs it, and in doing so unbeknowingly takes his own life.

The novel captures the essence of vainglory as Dorian seeks glory in youth, beauty, and pleasure and not in approval from what is truly eternal and everlasting.

The vanity of a woman in C.S. Lewis’ The Great Divorce

C.S. Lewis provides another clear example of vanity in literature in a scene from The Great Divorce. In this particular scene, people in hell are offered a bus ride to the outskirts of heaven, where they are greeted by spirits of friends, family members, or agents of God. The passengers on the bus are wispy ghost-figures, while their deceased friends or family members are solid spiritual beings completely transparent, bright, and beautiful.

One of the passengers is a lady who clearly gave herself over to vanity for much of her earthly life. Though she was exceedingly well-dressed in by the standards of hell, her fine attire at the outskirts of heaven was completely inferior to the presence of the solid spiritual beings.

When one of the beings approached her to help her make the journey from the outskirts of heaven (similar to Purgatory) to the mountains that lead to heaven, the following dialogue (described by a narrator) ensues:

“How can I go out like this among a lot of people with real solid bodies? It’s far worse than going out with nothing on would have been on earth. Have everyone staring through me.”

“Oh, I see. But we were all a bit ghostly when we first arrived, you know. That’ll wear off. Just come out and try.”

“What does it matter if they do?”

“I’d rather die … No, I can’t. I tell you I can’t. For a moment, while you were talking, I almost thought … but when it comes to the point … You’ve no right to ask me to do a thing like that. It’s disgusting. I should never forgive myself if I did. Never, never. And it’s not fair. They ought to have warned us. I’d never have come. And now-please, please go away!”

“Friend,” said the Spirit, “Could you, only for a moment, fix your mind on something not yourself?”

“I’ve already given you my answer,” said the Ghost, coldly but still tearful.

Lewis shows the power that vanity can exert over the soul—so powerful that the ghost victim prefers to spend an eternity in hell (which she has already experienced) than endure a few days of comparative disadvantage and shame when she has to expose herself as less significant and beautiful than the solid, spiritually transformed people around her.

Narcissus, Dorian, and the vain woman in The Great Divorce would have done well to seek true glory, which C.S. Lewis describes as the moment when God says, “Well done, my good and faithful servant.”

Given the power of vanity to undermine our identity, our relationships with others, our emotional state, and even our ability to accept salvation when it is offered to us on a veritable silver platter, we must make every human and providential effort to move away from this deadly sin and keep our eyes fixed on things that are above.

This article was first published on the Magis Center blog.

NDE: The Definitive Guide to Near Death Experiences