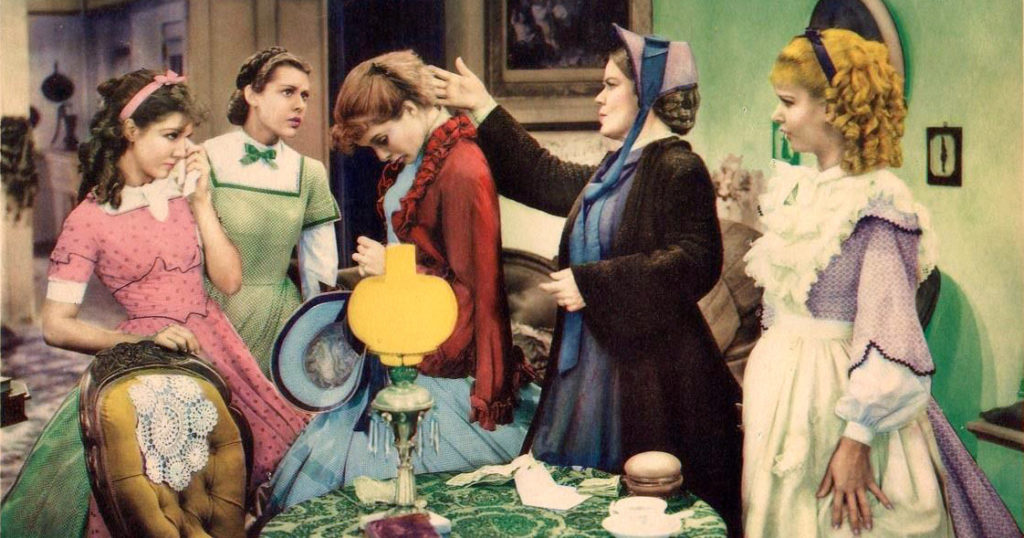 There have been four times in my life when I’ve said a prayer of thanksgiving after leaving the movie theater because I was so overcome with the beauty of the film. The first three were The Return of the King, Silence, and Calvary. The latest was Greta Gerwig’s adaptation of Little Women.

I’m still processing everything this film made me feel. However, I’m struck by how similar the sensation is to the one I get as I learn about the Martins of Lisieux. This is probably because the stories of the Martins and Marches contain many of the same themes. Of course the former are real, canonized saints and the latter are fictional characters, but I think that’s irrelevant. We read classic books for the same reason we talk about the saints: We need to hear good stories.

Here are some of the most striking similarities. Please feel free to comment with any others you noticed!

Warning: This post is riddled with spoilers for Little Women.

The Individuality of Vocation

The four March sisters have drastically different personalities. Meg is responsible and pious, Jo is headstrong and passionate, Beth is sweet and obedient, Amy is refined and astute. Their vocations reflect their personalities. For example, Meg marries a good but humble tutor, whereas Amy marries into society.

In one of the most moving scenes of the film, Jo drops to her knees before Meg on the latter’s wedding day and begs her not to get married. She tries to convince Meg to become an actress and stay with her sisters. Meg then tells her:

“Just because my dreams are different than yours, it doesn’t mean they’re unimportant.”

I love this line because it reminds us that what may seem incomprehensible to one may be another’s life calling. Personally, I can’t imagine living on top of a French mountain top and praying all day like a Carthusian, but that life has appealed to many wonderful people over the centuries. I imagine they would feel a similar distaste for my single life in suburban St. Louis.

I can personally relate better to Jo’s story. She makes it clear throughout the film that she probably won’t marry as she would rather be a writer than a housewife. Louisa May Alcott famously did not want to marry off Jo but was forced to by her publisher. Greta Gerwig’s adaptation beautifully assimilates Alcott’s plans for Jo with the book canon. She recognized that Alcott wanted Jo’s life to mirror her own, understanding that Alcott’s creativity was channeled into her writing instead of creating new life. It sounds a bit lonely leaving Jo alone and unmarried (which the character explicitly acknowledges in an exquisite monologue), but it’s what she was made for.

The Martin sisters had similarly varied personalities and interests. Marie and Pauline were the mother figures like Meg, Céline was drawn to art and worldly finery like Amy, and both Thérèse and Beth were content to contribute in their little ways.  And like Jo, Léonie Martin was always the odd one out.

Part of this was because of the way the children were born. Marie and Pauline shared a room, as did Céline and Thérèse. Léonie slept alone. She had had a sister who was only a year younger than her, but little Mélanie died at only four years of age, leaving Léonie without a sister with whom she could pair off.

The whole family was constantly disrupted by Léonie’s tantrums. She was even expelled from the school her sisters attended due to her psychological issues and a possible learning disorder. Mme. Martin eventually learned that a servant had physically and verbally abused Léonie, resulting in the little girl’s difficult and obstinate behavior, but some of the damage was done by the time she made her discovery.

Léonie tried to enter religious life twice but failed each time. Finally, she was able to enter a Visitandine convent in Caen. She died a happy religious, apparently unfazed by the fact that she was called to a different convent than her sisters. Her cause for canonization is the next in her family to progress. The diocesan inquiry into her cause will conclude on February 22 (source).

Léonie lived a very different life from her obedient, Carmelite sisters, but she still responded to God’s call in a saintly way, much as Jo found fulfillment in a different path than her sisters.

The real story is so much better than the word-of-mouth version.

I’ve mentioned before that I hated St. Thérèse for years.  She sounded like a marzipan-covered bit of cotton candy: Overly sweet and utterly unsubstantial. The worst was when I was trying to learn to pray and people would quote this little ditty to me:

“For me, prayer is a surge of the heart; it is a simple look turned toward heaven, it is a cry of recognition and of love, embracing both trial and joy.”

That is just a bunch of pretty words that explains exactly nothing about the mechanics of prayer.

That changed when I went to her home, sang in her convent, and prayed in front of her thigh bone in a drafty basilica. She only made sense when I let go of the image others had handed me. Thérèse must be approached as a member of her family if you want to really understand her.

Similarly, Little Women frequently gets a bad reputation as having approximately the same depth as a perfume bottle. But once you know the full story, it makes sense. Louisa May Alcott took the ordinary lives of average women and wove them into a classic story. She didn’t rely on rich men saving her characters or improbable acts delivering them, but on the relationships that formed them over a period of time.

The Beauty of a Hidden Life

Three of the March sisters find their place in the world, but little Beth doesn’t. In both the book and the movie she is timid to the point of being unable to attend school. Instead, she takes her lessons at home and keeps house for her family.

Her life probably seems dull or even wasteful to those outside her inner circle. However, her example guides her sisters to greater virtue. Amy remembers to read her Bible because of Beth, Meg learns the importance of doing one’s daily duty,  and Jo is gently pulled out of her wild daydreams and into reality by her favorite sister’s quiet companionship.

Thérèse’s life was similarly secluded. Like Beth, she found the company of strangers agonizing. She wrote in Story of a Soul:

“A glance was often enough to make me burst into tears. I was only happy if no one took any notice of me, and I couldn’t endure being with strangers. I was never cheerful except within the family circle, and there the greatest love and kindness surrounded me.”

Both girls overcame the worst of their timidity out of love. Beth did so to thank the old gentleman next door for giving her a piano, and Thérèse would give alms to the poor she met on walks with her father.

They also both died young. As a testament to their virtuous lives, both deaths inspired their sisters to greater goodness. In Little Women, remembering Beth’s pleas to get along helps Jo to forgive Amy for marrying Jo’s childhood best friend. The first time she sees Amy after the wedding and Beth’s funeral, she simply takes Amy’s hands and says, “life is too short to be angry at one’s sisters.”

After Thérèse’s death, her sisters invoked her to help them live saintly lives. Their letters are full of references to their sister, and they began to pray for her intercession immediately. The investigation of Thérèse’s cause for canonization actually brought the sisters together for the last time, as Léonie came to the Lisieux Carmel to be interviewed (source).

They also referred to their little sister regularly in their letters. During a visit with Pauline six years after Thérèse’s death, Léonie said, “Our Thérèse is my ideal.” She went on to explain the Little Way in terms that made it clear to Pauline that Léonie had integrated her abused, tantrum-filled childhood into a healthy adult life (source).

The Influence of the Home

Both the Marches and the Martins show that a good life is the fruit of thousands of small actions. There are a few decisive moments in each life, such as deciding to enter the convent or refusing to marry the wrong man. However, the majority of all the little women’s characters were formed by the influence of their home life.

The Marches read their Bibles every day, spent time with the poor, and worked. The Martins would go to Mass, study, and take walks together. Both families would gather in the evening to sing and play games. When a parent left or died, the older girls helped to guide their younger siblings.

Each member of the family understood their role in their household. When they found themselves in unfamiliar situations, they could extrapolate from their experiences at home what they should do. For example, when Amy is quarantined and separated from her family during Beth’s first illness, she turns her dressing room into a chapel and does her daily Bible reading there. Similarly, when Céline and Léonie were obliged to live with relatives during their father’s illness, Céline maintained the rhythm of her life by attending daily Mass each morning and filling her afternoons with painting religious art, sewing for the poor, and teaching aspiring First Communicants (source).

These homes became blessings to the people around them. In Little Women, the orphaned Laurie finds the family he always wanted in the Marches. Their acceptance is the catalyst for him slowly leaving behind bad habits and becoming a true gentleman. In the Martin family, Céline realized that one of the cousins she was living with also had a religious vocation. They counseled each other, helped one another avoid the temptation to live a worldly life, and both eventually entered the Lisieux monastery. Today Catholics around the world are inspired by this holy family.

Both Little Women and the Martin family are stories worth remembering and re-reading. They use simple, common stories to remind us of the deep virtue each of us is called to live. Both remind us of the importance of our relationships and our little choices. As St. Thérèse’ put it:

“Miss no single opportunity of making some small sacrifice, here by a smiling look, there by a kindly word; always doing the smallest right and doing it all for love.”

St. Thérèse and the Power of Surrender [Dr. Sri podcast]

10 Catholic Nuns Who Changed the World