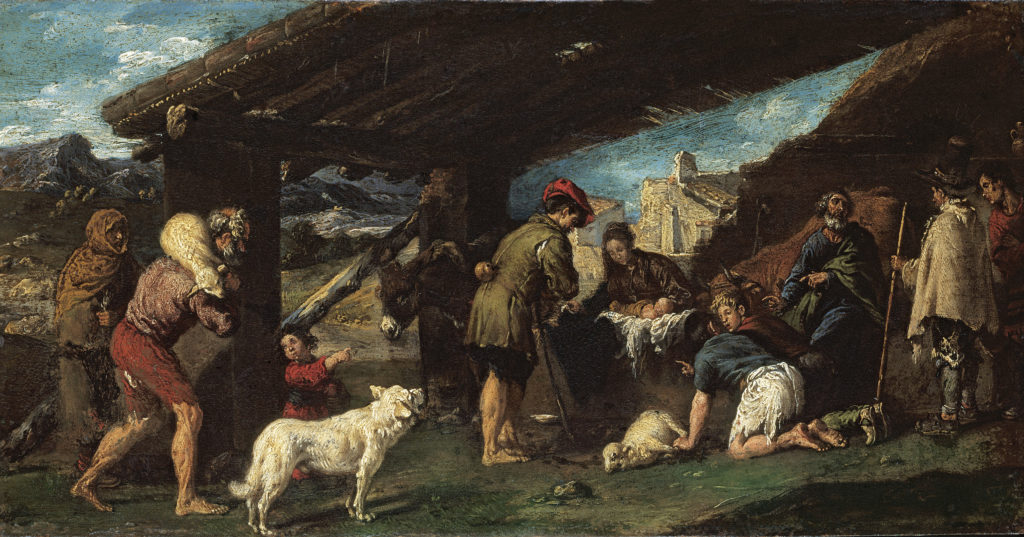 Millenia ago, in the ancient times of Jacob and Rachel, Bethlehem was called Ephrath. Jacob buried his beloved Rachel there, “beyond the tower of Eder,” after she died giving birth to Benjamin (Genesis 35:19-21). The Tower of Eder was Migdal-Eder, or the Tower of the Flock.

Ruth and Boaz gleaned wheat and married in this same area (Ruth 4:11-13). King David was born and crowned king of Israel there by Samuel (1 Samuel 16), and Bethlehem Ephrath, meaning, house of bread of fruitfulness, later came to be known as the City of David.

Joseph and Mary, as David’s descendants, were in Bethlehem at the time of Jesus’ immanent birth, because the Roman government had ordered everyone to their ancestral hometown for census and taxation. As was prophesied, Jesus was a direct descendant from the line of David, born in his city:

“But you, Bethlehem Ephrathah, Though you are little among the thousands of Judah, Yet out of you shall come forth to Me, The One to be Ruler in Israel, Whose goings forth are from of old, From everlasting.”

In those outlying areas of the little town of Bethlehem Ephrathah, on the road to Jerusalem, lay the Shepherd’s Field, the same field where Rachel was buried, Ruth and Boaz gleaned wheat for bread, King David was born and anointed, and the coming of the Messiah was prophesied.

In the Shepherd’s Field

The Shepherd’s Field was no ordinary place. The Jewish Talmud’s sacrificial regulations specified that the lambs sacrificed in the temple had to be born and raised within five miles of Jerusalem. Lambs destined for sacred use in the blood sacrifices of Jewish temple ministry twice a day, as well as for Passover, were born in the Shepherd’s Field.

The shepherds who watched over the flocks were not ordinary shepherds. Trained and employed in Levitical regulations by the temple priests close by, these shepherds kept watch over the sacrificial flock, day and night, from the upper-story vantage of the agricultural watchtower.

Laboring sheep were brought into the protective lower level of the migdal in the Shepherd’s Field. Rather than a stable with donkeys, chickens, and cows, this tower sheltered only lambs consecrated for holy use.

The priestly shepherds inspected all the lambs born in the Tower of the Flock in the fields of Bethlehem for any defect. Those precious and terribly fragile baby lambs deemed worthy for temple sacrifice were wrapped tightly in swaddling cloths and laid in the close protection of a manger, a feeding trough hewn from stone, to keep them from bumps, bruises, broken bones, and other blemishes, until they relaxed, rested, and grew sufficiently.

Because the sacrificial lambs had to be reserved, unblemished, within five miles of the Temple, and the cleanest stable with the cleanest feeding troughs—a perfect crib, eh?—would naturally be at the Tower of the Flock in Bethlehem, Joseph probably took them there purposefully in the pinch. The Lamb of God that would be led to the slaughter, as Isaiah 53 says, was born at the place all the other lambs for sacrifice were born (Micah 4:8).

“You know that you were ransomed from the futile ways inherited from your fathers, not with perishable things such as silver or gold, but with the precious blood of Christ, like that of a lamb without blemish or spot” (1 Peter 1:18-19).

The five miles of outlying pasture around Bethlehem Ephratha are where the angelic announcement took place and where the shepherds witnessed it. I take pilgrims there every year to see the Shepherd’s Field.

Glory to God in the Highest

The shepherds were guarding the sacrificial flocks on the hills of Bethlehem that night when the angel startled them from out of the darkness:

“Be not afraid; for behold, I bring you good news of a great joy which will come to all the people; for to you is born this day in the city of David a Savior, who is Christ the Lord. And this will be a sign for you: you will find a babe wrapped in swaddling cloths and lying in a manger” (Luke 2:10-12, emphasis added).

A swaddled baby was normal, as an expecting mother embroidered swaddling cloths for her newborn baby with symbolism from her family and the father’s, showing that the two families had come together and moved forward in the new child. Middle Eastern Christian mothers, to this day, still wrap their tiny babies in such special cloths to protect their extremities and help them rest peacefully. I did the same with my babies.

But a manger? The “sign” for the shepherds—privileged to receive that first, stunning public announcement of salvation—was a human infant, wrapped in “swaddling cloths” in a “manger,” exactly like their fragile, newborn, sacrificial lambs.

When the heralds and glory had left them to the silent holy night, the shepherds said to one another, “Let us go over to Bethlehem” (Luke 2:15). The Messiah could have been resting peacefully anywhere in Bethlehem, but the shepherds needed no further direction.

They who raised the sacrificial lambs for the temple knew exactly where to go, for the sign of a manger could only mean a manger in the Tower of the Flock in their fields. Surely they recalled Micah’s prophesies as they hurried, knowing from experience that the restoration of Israel’s royal authority in the Messiah would come from the bottom floor of Migdal-Eder (4:8), not merely in Bethlehem, but more specifically Bethlehem Ephrathah (5:2)—the town of David, the home of Boaz, the burial ground of Rachel.

Who else would understand such a heavenly message, but these special shepherds? Babies don’t belong in mangers, yet this One, destined to be “the Lamb of God who takes away the sin of the world,” could belong nowhere else.

God used the untimely census to get the Holy Family to Bethlehem, and the inhospitable crush of the crowds to get them to the Tower of the Flock. What thoughts did Joseph and Mary carry in their hearts as they approached the refuge of those sacrificial lambs that cold night?

Could they have missed the implications? Did speculations on Isaiah’s grim Messianic prophesies hover over the happy, holy scene that we reimagine and re-participate in every Christmas? Did Simeon’s prediction in the temple forty days later confirm their trepidation?

Could knowledge of Jesus’ birthplace have been what prompted John the Baptist to later proclaim, “Behold, the Lamb of God who takes away the sin of the world”? How often did Mary recall the extraordinary Providence in the seemingly dismal details surrounding Jesus’ birth as he hung before her on the Cross, skewered like a roasting Passover lamb?

That first, cold, silent night, Mary had a little Lamb. His fleece, white as snow, would be one day stained with the blood of redemption. His first breath, his first moments of life in the Tower of the Flock on our weary, oblivious earth announced that salvation had come as a sacred Lamb of sacrifice. He remains, yet—on the Catholic altar—the “lamb standing, as though it had been slain” (Revelation 5:6), broken and spilled out in the Eucharist for you and me.

Why Examination of Conscience before Communion Is Crucial

Best-selling author of Fulfilled and How to Pray Like Mary, Sonja Corbitt is the Bible Study Evangelista and creator of the LOVE the Word® Bible study method and journal. A best-selling author, her weekly CatholicTV and radio show and other Bible study resources are created with you in mind—bites of spinach that taste like cake—to help you “love and lift all you’ve been given.” What’s an “evangelista”? Find out at biblestudyevangelista.com.