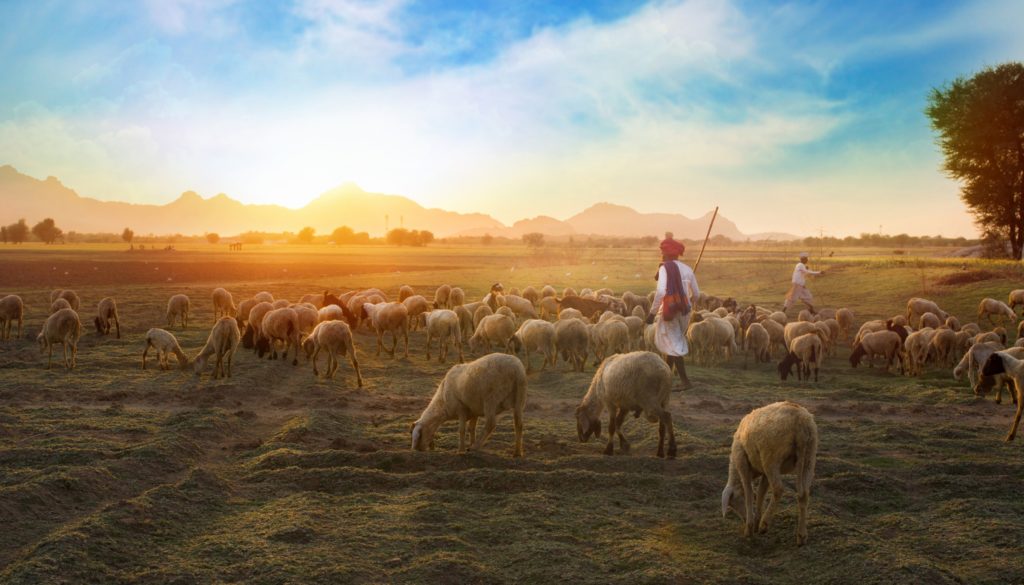 In John 10:11-18 Jesus presents three distinct characters; the Good Shepherd, the hired hand, and the wolf. Jesus is the Good Shepherd. He lays his life down for his sheep. FYI: you’re the sheep.

So, what is the take away? Well, first off, Jesus loves us enough to die for us, and he does so knowing us. We are not a nameless sheep. He knows us, and we know him. At least we do if we are his sheep. Take a moment to really hear that. Jesus goes out of his way to tell us that the Good Shepherd knows his sheep. He knows you. Too often the concept that God died for “us” creeps into our mind, and we forget that God died for me. The Good Shepherd knows the sheep.

The second take away is a reminder that as followers of Christ we are supposed to be imitators of Christ. We are supposed to be like him. That means in our daily lives we should be seeking to offer our lives for others, the way he offers his life for us. That doesn’t just mean offering up the annoying circumstances of life. Listen to Jesus’ words about how he gives his life:

Sounds like he is talking about something more than getting stuck in traffic and “offering it up.” Jesus’ sacrifice is more than incidental. It is intentional.

Imitating the Good Shepherd in Marriage

We too are called to intentionally offer our lives as “living sacrifices.” Most often that is going to take place within the context of our vocation, or state of life. Want to see the Good Shepherd lived out in a marriage? Watch the joyful self sacrifice of a father who wakes up before the sun to head to work so that he can sustain and support his wife and children.

There is a lot of death to self that happens when you rise at o’dark thirty. There is a real laying down of one’s life. Or, watch the wife, who manages the household with joy, so as to foster a happy, healthy home, where the love of God can be tangibly experienced. Married life is a powerful example of living out the call to be like Christ, the Good Shepherd … at least, it can be.

Remember the second character, the hired worker? Well, too often this character is seen in married life. Rather than participating in the sacrifice of Christ, this person ends up acting out the life of the hired servant. I have been this guy far too often. It is the grumbling father who just wants to sit on the couch and be served, forgetting to serve. If you have ever found yourself keeping a mental ledger of what you are doing verses what your spouse is doing, then you are probably slipping into the hired servant category. The hired servant has a place. He does stuff, but he does stuff so that he can be rewarded.

In marriage, service should not be tied to reward. When times are good, the hired servant is fine. But, when the proverbial excrement hits that fan, the hired servant crumbles and runs. Again, living your vocation in the example of Christ, we had to remember that Christ did not run from the Cross. He did not come out swinging. He offers his life. He made himself totally present to the Cross. When trial and challenge faces your vocation, it isn’t time to go on a guys golf trip, or on a girls escape weekend. It is time to carry the cross, not for yourself, but for the sake of the beloved.

Not to be forgotten is the wolf. The wolf seeks to destroy, kill, and devour. You would be a fool to think there is no evil. You would be a fool to think that your holy marriage is not something the devil would like to destroy. The hired servant does not even look out for the wolf. He is taken by surprise and runs when it appears. If you are not actively seeking to strengthen your marriage and protect your marriage you might be the hired servant.

The Good Shepherd would rather lay down his life than abandon the sheep. I cannot help but remember St. Paul’s words in Ephesians, chapter six:

“Therefore take up the whole armor of God, so that you may be able to withstand on that evil day, and having done everything, to stand firm” (Ephesians 6:13).

You don’t put on armor unless you’re expecting a fight. St. Paul tells us to put it on and to be ready. In marriage that means standing guard against the temptations of the world, and being ready to rebuke them in Jesus’ name. Sloth, lust, arrogance, etc. Be on guard, and when the devil whispers his lies and temptations, be ready to fight. Better to die fighting than to give up the sheep.

Jesus calls us to imitate him. He tells us that we too are called to lay down our lives. It is not an incidental offering, but an intentional one. Most often, the place you will be called to imitate the shepherd is in your vocation. It is only in giving up our lives that we truly live.

Allow Jesus to Shepherd You

Why the Symbols in John’s Gospel Matter