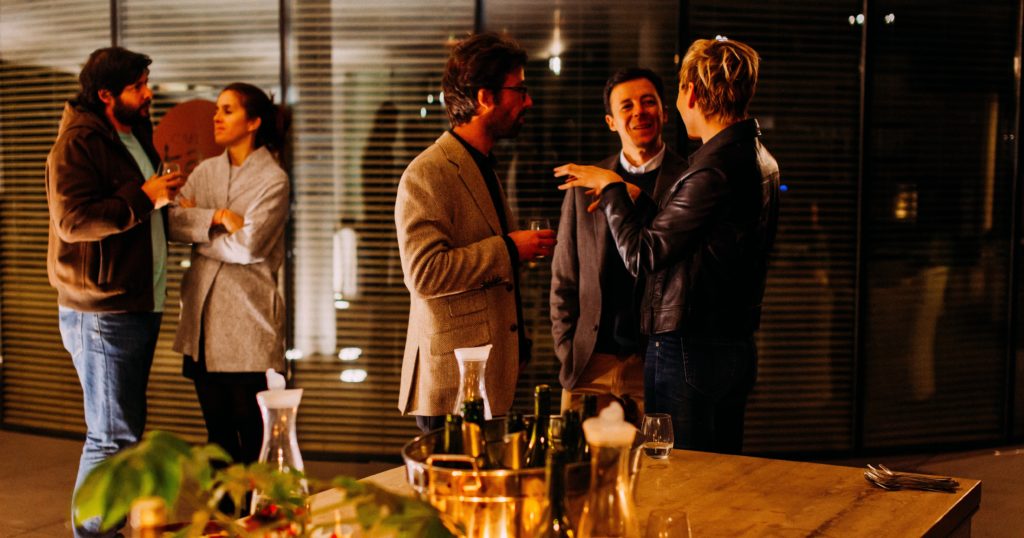 Evangelizing can be tough; I hear this from my students all the time: they don’t know how to interact with a certain sibling who has left the Faith, or a particularly caustic uncle or parent who likes to take potshots at the Church and belittle those of faith.

How can we maintain our peace and remain comfortable in our own skin? How can we better play our part in bringing those around us closer to Jesus?

Forget for the moment the goal of winning an argument—let’s first just be ourselves. If we’re asked about how we’ve been and we recently attended a great Catholic conference on Christ-like leadership or the like, we shouldn’t simply answer: “Fine; how have you been?” Rather, we should give a brief but honest answer, something like: “Great, I just went to this Catholic conference on how to be a better Christ-like leader—it was really inspiring. How have you been?” This response is brief and non-confrontational; but it is honest—we are making the importance of our faith known. If the other person wants to ask more, they can do so; if not, that’s OK.

In other words, too often we simply assume the other person is not interested in such spiritual events in our life, so we keep our mouths shut. But the fact is if we don’t find subtle ways to make our personal relationship with God known, where else will this person ever be exposed to it?

If we simply develop the courage to be ourselves, we’ll make a lot more progress than keeping our faith to ourselves.

And we’ll be a lot more comfortable in our own skin, not to mention learn how to be more authentic around people with whom we disagree. No one can argue with our experience of Christ in our lives. We make a massive mistake if we give the impression that our faith is merely about apologetics; we have to learn to be vulnerable enough to express our authentic selves—including and especially our love for Jesus and our ongoing personal relationship with him. Again, occasional brief but heartfelt comments go a long way to this end.

Tip 2: Be brief, but confident in your witness.

Too often in our attempts to witness and respond to objections to the Catholic Faith (or against a general Christian worldview), we get defensive and clam up; we stumble over ourselves, as we try to remember as much as we can about this or that topic. Far more effective is a brief but bold word. For example, suppose someone is spouting off about the Church’s sexual teachings. I typically begin my response this way: “The Church teaches what she does about sexual matters because she loves people.” Saying this in a calm and confident voice typically surprises people.

So often it’s important to simply reframe the issue: instead of fussing over why this or that sexual action is wrong, we can ask: “Which manner of utilizing our sexuality is most befitting to our dignity as human beings—as persons? Which way do you think glorifies our Creator more and honors the way in which he wills us to express love with our bodies?” I’m not saying that certain actions aren’t wrong; but I am saying that reframing the issue is likely to have significantly more rhetorical traction in our current climate.

To take another example, suppose someone from a Protestant background is railing on how unbiblical Catholic devotion to Mary is, we can respond by once again reframing the issue, as always with a calm and confident demeanor, saying: “Jesus has established a new family; now that we’re in Christ—like Jesus—we take Mary as our spiritual mother, just like the beloved disciple did in John 19:26-27. In other words, before we go into “proof-text” mode, we need to reframe the issue in its proper theological and familial setting. And especially with our Protestant brethren, we should always root everything in Jesus: He is the vine and we (and all the saints, especially Mary) are the branches—everything stems from being in Christ. Mary’s glory and honor shares in—it does not compete with—that of Jesus.

Tip 3: Assume you’ll get another chance.

This one is paradoxical, but in practice it helps a lot. Very often when the spiritual conversation finally comes along with, say, family or a co-worker, we’re eager to dump everything we’ve been wanting to say for the past several months or even years upon them. This situation seldom goes well when we seek to unload our wealth of Catholic knowledge and devotional practice upon an unsuspecting dialogue partner. Often, in this situation, less is more. In other words, by planting well-aimed confident seeds, we frequently make more headway than dousing them with “everything we know.”

Why do we so often overdo it in this way? Because we think this is our only shot—after all, who knows when this opportunity will come up again?

But if we assume internally that we’ll get another chance, we’re likely to engage in a calmer and less over-the-top manner. For example, to use the sexual example above, if we can register firmly a few principles in order to explain where we’re coming from, that’s more significant than running through a litany of stats. Or, taking the Marian example, if we can make a few general points about Mary, with a few illustrative examples, this is likely to go further than getting into a verse-slinging match.

We have to be careful not to overestimate the interest of the other party; we want to whet their appetite—we don’t want to overwhelm them to the point that they never want to ask another question again.

Tip 4: Be modest in your goals.

Once again, this one is a bit paradoxical. But if we think of our job as trying to bring this person “one level up” from where they are, we’re likely to remain calm and evangelize a lot more than we do. Too often, we seem to say to ourselves, “Since I can’t make this person into a daily communicant, I just won’t say anything.”

I have found Sherry Weddell’s analysis of the five thresholds of conversion to be very helpful here. In brief, they are: (1) trust; (2) curiosity; (3) openness; (4) seeking; and (5) becoming an intentional disciple. The trust stage is basically any kind of positive association with the Faith—maybe they have a friend who’s Christian, or they had a positive experience from a school they grew up attending. If they’re not at this stage, then our first task is to build trust; if they are, we want to broaden and deepen their trust.

The next threshold is curiosity where the person shows some level of being intrigued by the Christian or Catholic faith. Here, Weddell cautions against overestimating their interest: they might have a teaspoon worth of curiosity, in which case we don’t want to drown them with a gallon of answers. We want to pique their curiosity, giving them satisfying but brief answers, hopefully encouraging them to come back for more.

The third stage of openness is where a person is really starting to entertain the fact that their life could really change—they’re considering giving their lives over to the Lord.

In the final two stages of seeking and becoming an intentional disciple, the person becomes much more active in their acceptance of Christ’s marriage proposal; here the person encounters Christ in a living way and he becomes Lord of their entire mind and heart (I explain Weddell’s model further and elaborate on the above and other points relevant to evangelization in my book, Spiritual Survival in the Modern World: Insights from C.S. Lewis’ Screwtape Letters, 19-33).

For our purposes, the tip here is that we don’t have to hit a home run in one sitting; a more modest goal would be to assess what threshold the person is in and facilitate their ability to move to the next one. Such a modest goal takes the pressure off us, making us much more likely to evangelize, and in the end bear more fruit.

Tip 5: Bring God into the conversation.

If someone is sharing something they’re going through (say, a relative is sick with cancer), it’s worth gently asking, “Where is God in this for you?” By gently raising this question, we’re inviting them to bring God into this dark time and perhaps even talk about their struggles there.

If someone is really going on about what they dislike about the Church, they will probably expect us to get upset and respond emotionally. Keeping calm will disarm them. Sometimes allowing them to vent can be therapeutic; our kindness in hearing them out often softens their edge against the Faith.

It’s not all on us; we should pray—before, during, and after—for all those with whom we’d love to share the gospel. By praying for them beforehand, we’re likely to be more attentive to opportunities that present themselves to plant the seeds of the gospel. God will blossom them in his own time. We should play the long game with a calm and joyful confidence—not defensive and unafraid.

Who has God placed in your path and how can you facilitate his work in their life?

The 99, An Evangelization Mission Series

Natural Happiness: A Philosophical Approach to Evangelization [Every Knee Shall Bow podcast]

Featured photo by Antenna on Unsplash

The Despair of Judas versus the Sorrow of Peter: A Lifesaving Difference
In Revelation, Mary Embodies the Church
A Road Map for the New Evangelization
'They Worshiped, but They Doubted'
Has Ascension's free media strengthened your faith?
You can now offer ongoing support for this content with a recurring gift.
Support Ascension