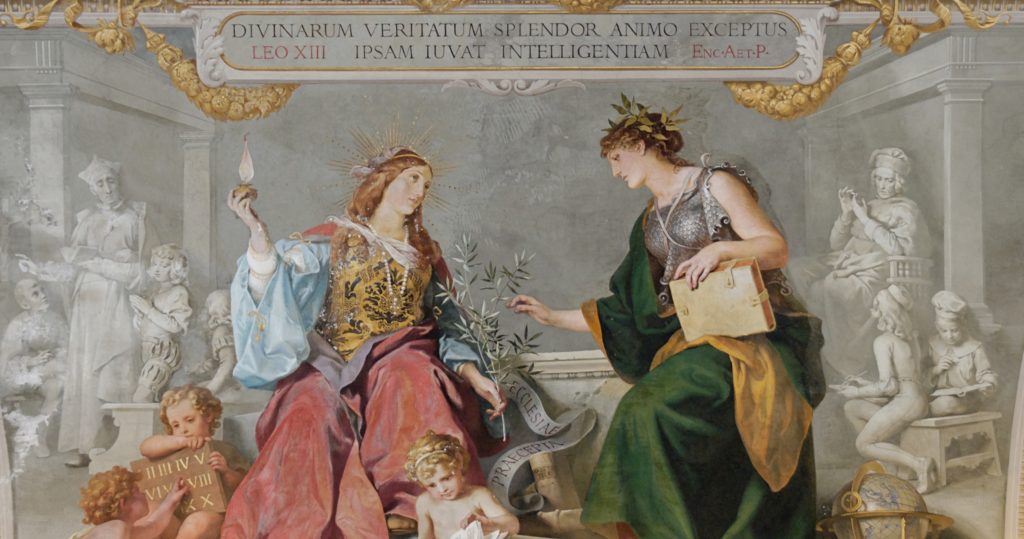 There is a strain of thought that has taken a stranglehold on Western culture in the present time that claims faith cannot be an act of the intellect. If one is to be considered an intellectual, then such a person would never succumb to the devotions traditionally identified with religious practice, this strain of thought assumes. In modern parlance, the word “faith” has come to mean nothing more than an emotion or mere sentiment that is incapable of being articulated in a reasonable way.

Indeed, religious faith has come to be seen as something unreasonable as more adults in Western countries identify as having no religion whatsoever, supposedly enlightened by modern science which is based on so-called observable evidence. St. John Henry Newman noticed this over a century ago when he wrote that, for many:

“Religion consists, not in knowledge, but in feeling or sentiment. The old Catholic notion, which still lingers in the Established Church, was, that Faith was an intellectual act, its object truth, and its result knowledge.”

How many of our friends and peers hold to this “old Catholic notion”? And that goes for those that are non-theists as well as Catholic Christians. Even some of our own brothers and sisters in the Faith seem to divorce faith from reason. The Church, as St. John Newman points out, has continually maintained that faith in God is not opposed to reason in any way and is as much an act of the intellect as is the study of human history or the natural sciences. The author of the Letter to the Hebrews states:

“Whoever would draw near to God must believe that he exists and that he rewards those who seek him.”

Just as human beings seek truth about the natural world around them, which is considered to be reasonable, so, too, will it be reasonable for the same people to seek the source of all truth. Faith seeks answers to the questions we have regarding the natural and supernatural order of things, and because it is reasonable to seek these answers, it is untenable to suggest that faith and reason are diametrically opposed to each other. Faith is not a mere emotion, but instead is an action of the intellect which seeks to understand truth in the most complete sense.

When considering the faith of any individual, the Christian must acknowledge that faith itself is a gift from God. The Catechism of the Catholic Church, quoting the Second Vatican Council’s Dogmatic Constitution on Divine Revelation, Dei Verbum, observes that faith is an invitation given to humanity by God himself, where he “addresses men as his friends … in order to invite and receive them into his own company” (CCC 142). Sometimes this invitation is rejected, as is seen by the meteoric rise of those with no religious affiliation whatsoever. As the Pew Research Center discovered in a recent survey:

“Both Protestantism and Catholicism are experiencing losses of population share. Currently, 43% of U.S. adults identify with Protestantism, down from 51% in 2009. And one-in-five adults (20%) are Catholic, down from 23% in 2009. Meanwhile, all subsets of the religiously unaffiliated population – a group also known as religious ‘nones’ – have seen their numbers swell.”

For those that do accept the invitation, and then continue to hold on to that faith they’ve been invited into, the Catechism notes that such persons have good reason to do so:

“By faith, man completely submits his intellect and his will to God. With his whole being man gives his assent to God the revealer … To obey in faith is to submit freely to the word that has been heard, because its truth is guaranteed by God, who is Truth itself.”

Far from being a fleeting affection or childish hope, faith is something that is arrived at after deep thought and reflection within the mind of the man that comes to profess trust in God. To have faith in something or someone ultimately means that one trusts an authority. In a natural sense this can be a study, an expert in a certain field, or even a parent or superior. In a supernatural sense, faith is applied to God and becomes a theological virtue, which sets it apart “from all other things pertaining to the intellect”, as St. Thomas Aquinas professes in his Summa Theologiae. To understand what Aquinas means by this, one must find the root of such a notion in Sacred Scripture, as he does himself.

The author of the Letter to the Hebrews refers to faith in the following manner:

“Faith is the realization of what is hoped for and evidence of things not seen.”

In this modern age, many talking heads will ask about evidence for the things that Christians hold to as true in good faith. When such people discuss bringing evidence to the table, virtually every instance involves asking for some kind of material evidence which would come from the natural sciences. However, it is impossible to provide natural evidence for something supernatural like the existence of angelic beings that are pure spirit, or the doctrine of transubstantiation. Scripture is clear that faith itself is the evidence, or assurance, that man needs in order to have belief in certain truths.

Faith Is a Virtue

Aquinas goes into much greater detail concerning what the sacred author intends by using “evidence” in this context:

As the eleventh chapter of Hebrews continues, we see many instances of faith among the heroes and saints of the Old Testament. In looking to such figures as Abraham and Moses, the sacred author shows that faith is constantly looking toward heavenly things. Speaking about the faith of these people in Israel’s history is meant to illustrate the wonderful things that will come to those who also persevere in faith. This evidence that is provided will move the reader’s intellect to adhere to the truth that God is creator of the world and that he sustains those who completely submit their own will to him, to echo the words of the Catechism above.

The question remains as to how this faith in God is to be characterized apart from faith in other natural senses. Aquinas summarizes this eloquently as he elucidates on this definition of faith:

The Angelic Doctor observes that one can have faith in an opinion, but this is different from the kind of faith that rises to the level of virtue. The natural kind of faith he mentions can oftentimes be irrational, becoming the mere “emotional faith” that many atheists and agnostics in the current cultural climate accuse Christians of possessing. To quote St. John Newman again, such atheists and agnostics believe “that Religion was based on custom, on prejudice, on law, on education, on habit, on loyalty, on feudalism, on enlightened expedience, on many, many things, but not at all on reason; reason was neither its warrant, nor its instrument, and science had as little connection with it as with the fashions of the season, or the state of the weather.”

God Is the Evidence

Indeed, Aquinas shows that supernatural faith is even more reasonable than the faith that many hold regarding their convictions pertaining to the natural world. The intellect works together with the will so that an act of faith might be made. To be sure, this is not something that man does on his own. As the Catechism states:

“Believing is possible only by grace and the interior helps of the Holy Spirit. But it is no less true that believing is an authentically human act.”

God invites all to come to this faith, but cooperation on the part of each individual person is needed to reach that point.

Whereas many thinkers from the Enlightenment, and their philosophical descendants in the present day, might scoff at the idea of religious or supernatural faith being based in reason, the wisdom of the Church prevails in showing that this type of faith is firmly grounded in reason. The intellect and will are capable of judging the truth claims of Scripture and sacred Tradition, whether or not these claims are reasonable and non-contradictory, and with the grace and invitation of God all human beings are capable of arriving at the same conclusions reached by others spanning throughout the centuries. As St. Paul reminded the Ephesians:

“I do not cease to give thanks for you … that the God of our Lord Jesus Christ, the Father of glory, may give you a spirit of wisdom and of revelation in the knowledge of him, having the eyes of your hearts enlightened, that you may know what is the hope to which he has called you.”

True enlightenment comes from accepting the promptings of the Holy Spirit, giving assent to the revelations that God has provided to all of humanity. The Christian does not put his faith in someone or something without evidence, but in the Creator that is the author of all revelation.

St. John Henry Newman and His Critique of Modern Ideas

There Is No Conflict between Faith and Science [The Tightrope Podcast]

Always Be Ready to Give a Reason for Your Hope

The Bible Is Inspired by God
Why Jesus Had to Ascend to Heaven: Answers from Scripture and Aquinas
The Magisterium and the Dilemma of Dissent
Why Follow the Rules When You Can Follow Your Heart? (Part 2)
Has Ascension's free media strengthened your faith?
You can now offer ongoing support for this content with a recurring gift.
Support Ascension