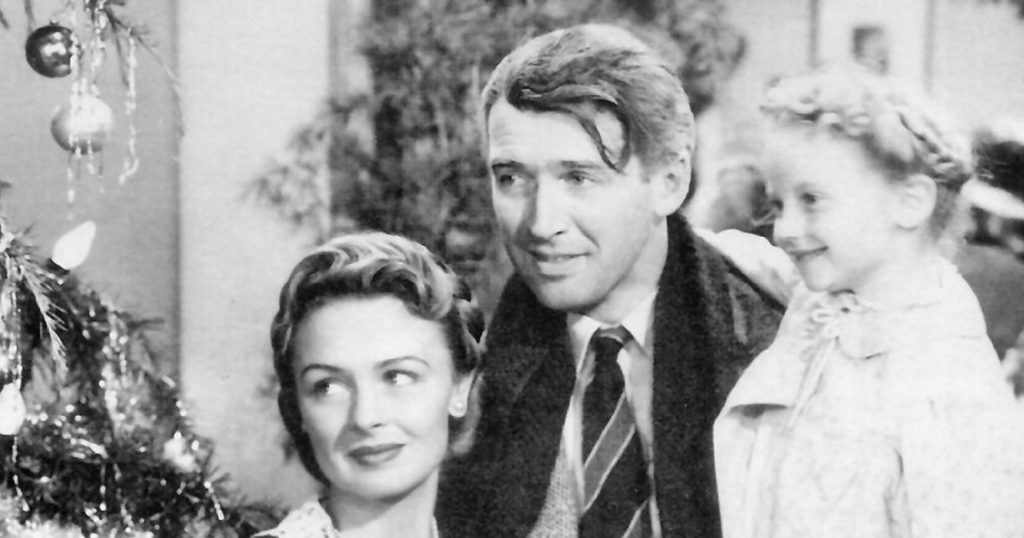 I decided to show my philosophy class Frank Capra’s classic, It’s A Wonderful Life, as a way of inviting a good old-fashioned existential discussion with a Christmassy backdrop. As we watched I was, as usual, drawn right into the film and even misty eyed a few times. Today, when I showed up to sub for another teacher, my assignment was to show it to two of her classes—both times I found myself equally glued. Then, during a call at lunch, in the midst of a conversation about other things, a friend told me about his recent experience of looking up the movie on Amazon Prime at 1 a.m. only to find himself still awake and crying at 3 a.m.

In my 20’s, as a grad student in theology, I used to get hung up on the misunderstanding about what an angel is. (Clarence, a major figure in the story, is a 200 years deceased human-being trying to get his angel wings. Of course, angels are persons, but not human persons, and the premise of Clarence’s story misses all of that.)  As life goes on though, I’ve been able to get over the wonky metaphysics and focus more intently on the captivating and didactic story of George and Mary Bailey.

This year in particular I’ve been mulling over what I like so much about the movie and I’d like to share a few thoughts with the hopes that readers might chime in with their own Bedford-Fallsian musings.

I think this is the big overarching lesson of the film. George Bailey lives in the tension between his dream of leaving Bedford Falls for adventure and the life of stay-home-dutiful-sacrifice that has shaped his actual trajectory. As we follow George’s story, we see that in his depths George hasn’t really integrated his altruistic choices or surrendered his ambition for some other life beyond his small town. George hasn’t quite figured out or experienced that his self-surrendering sacrifice is a well rather than a drain. He still supposes that when he chooses the right thing out of duty and decency, as he is bound to do, he is missing out on bigger and better things.

The truth, though, is that George Bailey has been growing rich all along. The truth is that the life of adventure that he thought he wanted, would have turned up empty and unsatisfying had he not learned and lived as a man for others.

I guess my take away over the last few times through the film is that George Bailey, who admits himself not to be a praying man, has lacked the interior life one needs to process and integrate the joy of giving and the impact of his choices. The remedy for this turns out to be rather severe.

George Bailey is a magnet for the violence of grace

For all of his positive contributions and generous impulses, George Bailey is an interiorly twisted mess. He doesn’t quite know who he is or what he wants. In spite of that, he makes so many big sacrifices and chooses a thoroughly selfless path, always somewhat begrudgingly and with a divided heart. He forfeits his dreams without letting go of them and is slowly eaten alive from the inside.

He’s a lovably, albeit almost tragically, flawed protagonist in need of some serious help. When he prays and thinks that God’s response is a punch in the mouth, it is. The only way to rescue George from despair is for him to climb all the way down into it. There is something really awful about George’s breakdown and subsequent vision of a world in which he had never been born, but this whole process of purgation is his only path to redemption.

It is through a Christmas Eve Good Friday and Holy Saturday experience that grace tears down and builds on both the altruistic nature of George Bailey and the death of his childhood ambitions and dreams.

In his mock self-help book, Lost in the Cosmos, Walker Percy says:

“The difference between a non-suicide and an ex-suicide leaving the house for work, at eight o’clock on an ordinary morning: The non-suicide is a little traveling suck of care, sucking care with him from the past and being sucked toward care in the future. His breath is high in his chest. The ex-suicide opens his front door, sits down on the steps, and laughs. Since he has the option of being dead, he has nothing to lose by being alive. It is good to be alive. He goes to work because he doesn’t have to.”

Prior to his breaking point George Bailey is a little traveling suck of care. His interior life has rendered him somewhat blind to his fortunes. He is moved by a sense of obligation and is in serious need of an interior makeover. It takes a radical experience of rock bottom for him to come back to life.

When he stands on the bridge and prays, “I want to live again,” there is a certain ownership that he takes over the whole project of his existence. In the following scenes George is noticeably delighted by all of the things that had formerly been afflictions. He is filled up with gratitude and confidence and then has the capacity to receive the overwhelming rescue that makes its way into his home.

Mary Bailey is the Church

I’m just going to throw this out there: Mary Bailey is notably flawless. She knows who she is and what she wants. She is confident, giving, affirming, forgiving and even more so than Clarence, she is the long haul bearer of grace for George throughout the story. I’m going to go ahead and say that she is a literary type of the Church. I doubt that Frank Capra was going for that, but her preternatural presence points to a heavenly bride, at least in my mind. (I’d love to hear other thoughts on this.)

There are some scenes in It’s a Wonderful Life that are potential #metoo nightmares in 2019; George and Mary’s Buffalo Gal date scene for instance. Mary loses her robe. George refuses to give it back and jokes about what he might do. He gets news about his father’s stroke, gives the robe back and drives off.

While I’m guessing there are some who have serious problems with that scene today, I was more struck by my philosophy students who had no problem with it whatsoever. Maybe this is because the viewer has no doubt about Mary’s safety or George’s actual intentions. He jokes about not giving the robe back because it’s clearly a joke. Mary and the viewer are clear that George is not about to expose, use, humiliate or betray Mary. Mary is confident and complementary to George. My students noted that it would be almost impossible to recreate this scene today without it being problematic.

It struck me that even the kidding about “passionate necking” and “making violent love” that George and Mary make to their mothers works because the characters in question actually have a sense of self-control and virtue. They jest because they are confident in their actual intentions. Without glorifying the world before the sexual revolution in which there was a whole lot of darkness below the surface, let’s say George and Mary specifically portray a positive and healthy sense of sexuality that isn’t licentious. It’s refreshing. It makes the romantic tension in the film all the more captivating and points to the pathetic and boring state of our immodest modern culture. (It leads one to wonder if someone slipped a copy of Theology of the Body Middle School or YOU into a time machine bound for Bedford Falls.)

OK, so there are a few of my thoughts about It’s a Wonderful Life this year. How about you? Watch it again if you haven’t this year and comment, even if you want to muse how the plot line could have been improved if Frank Capra had a decent copy of the Summa Theologiae to explain what an angel is. (Every time a bell rings a theology major corrects a heresy.)

Here’s to hoping the gift of Christ at Christmas opens all of our hearts to receive grace and to live in the freedom of God’s children. From all of us here at Ascension, Merry Christmas!

A Merry Christmas Season to All!

Merry Christmas from Every Knee Shall Bow