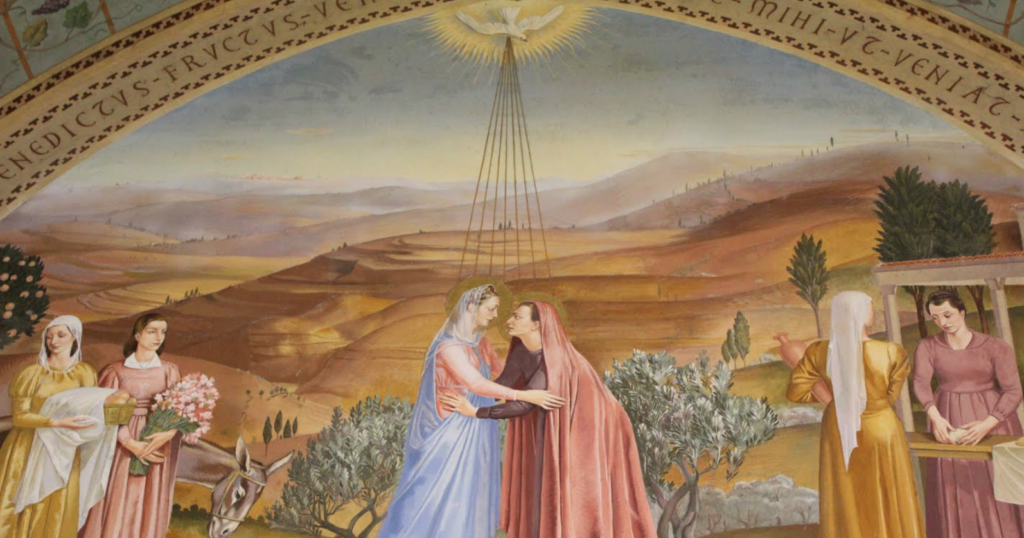 The Blessed Virgin Mary is the model of Christian belief and action. A reflection on the Visitation narrative in St. Luke’s Gospel reveals her profound receptivity and generosity to the action of the Holy Spirit in her life.

According to St. Luke, after the Annunciation, “Mary arose and went with haste into the hill country” (Luke 1:39) to visit her cousin, Elizabeth. Mary is full of the Holy Spirit—the Holy Spirit overshadows her—and in response to the message of the archangel, she rushes to Zechariah’s house, joyfully sharing her news and aiding her elderly cousin, Elizabeth, who is now with child.

The protagonist in this scene is the unseen Jesus, son of Mary. Through Jesus’ presence, the women praise the Lord for the great works he has done for them, while the unborn John the Baptist leaps for joy in Elizabeth’s womb. Pondering this scene of exultant joy, let’s begin an Advent reflection on the dialogue and gestures of the characters, as we eagerly await the birth of Jesus Christ.

As the first evangelizer, Mary brings Christ to Elizabeth and her unborn son, John the Baptist. Mary’s greeting to Elizabeth results in the latter’s unborn child leaping for joy. I cannot imagine what this would have felt like for Elizabeth—she was six month’s pregnant! But Elizabeth exclaims that the exultant leap was in response to Mary’s words.

St. Ambrose of Milan sheds light on this remarkable event:

“Notice the contrast and the choice of words. Elizabeth is the first to hear Mary’s voice, but John is the first to be aware of grace. She hears with the ears of the body, but he leaps for joy at the meaning of the mystery. She is aware of Mary’s presence, but he is aware of the Lord’s: a woman aware of a woman’s presence, the forerunner aware of the pledge of our salvation. The women speak of the grace they have received while the children are active in secret, unfolding the mystery of love with the help of their mothers, who prophesy by the spirit of their sons.”

We discover here much to contemplate: God’s presence, his Word, and the response of faith. Mary received God’s word, not merely in her heart, but most fully in the flesh of her womb. God’s Word becomes flesh in response to her “fiat”; Mary then hastens to take the Word to her cousin and her family. Mary becomes the messenger of God’s salvation.

John the Baptist is the first to respond to Mary’s word. Then Elizabeth exclaims with great joy that the Mother of her Lord has come to visit her (Luke 1:43). Moved by the Holy Spirit, in faith Elizabeth acknowledges the great mystery God has accomplished in the Virgin.

Faith as the Response to God’s Word

Elizabeth declares, “Blessed is she who believed that there would be a fulfillment of what was spoken to her from the Lord” (Luke 1:45). The Word of God became flesh in Mary because she responded with faith to the message of the angel, Gabriel. Mary, the humble handmaid of the Lord, is elevated to be the Mother of God.

Since Mary is the model of Christian belief, St. Ambrose brings this point to bear on our own lives:

“You also are blessed because you have heard and believed. A soul that believes both conceives and brings forth the Word of God and acknowledges his works.”

“The joy of the gospel fills the hearts and lives of all who encounter Jesus.”

Mary, Did You Know?

What was Mary’s response to Elizabeth? Demonstrating her profound humility, Mary echoes her ancestor, Hannah, in the Magnificat, the beautiful hymn of praise to God for the great mercy he has shown to her (Luke 1:46-55).

This reflection on the “Visitation through the eyes of Mary”, reminds me of the 2014 Christmas song by the well-known a cappella group, Pentatonix, “Mary, Did You Know?” The song received mixed reception among Catholics, ranging from acclaim to dismissal due to its questionable theology. Putting aside the issue of the song’s lack of awareness of Mary’s Immaculate Conception, we can look at one line that relates to the Annunciation and the Visitation.

The song asks, “Mary did you know that your baby boy would one day rule the nations?” A close look at the narrative of the Annunciation, tells us that the answer would be “yes!” since the Archangel Gabriel declared her Son would “reign over the house of Israel” (Luke 1:33). This is an allusion to numerous Old Testament messianic prophecies which foretold of a future Davidic king who would re-gather the dispersed twelve tribes of Israel, and with them the gentile nations. This Messianic expectation was widespread among the Jews at the time of the Annunciation.

In the Magnificat, we discover Mary’s implicit reference to her son’s royal status, and hence her own elevation to majesty:

“he has regarded the low estate of his handmaiden…. for he who is mighty has done great things for me…. He has put down the mighty from their thrones, and exalted those of low degree.”

Indeed, as the archangel declared that Jesus would take the throne of David, Mary’s words in the Magnificat indicate that she would assume the role of the ‘Queen Mother’ (Hebrew: Gebirah, meaning ‘Great Lady’).

Elizabeth begins her profession of faith with the exclamation:

“Blessed are you among women, and blessed is the fruit of your womb!”

And in response, Mary, our ‘Great Lady”, prophesies that she will be blessed by peoples from “generation to generation” (Luke 1:48). Indeed, throughout the history of the Church, Christians have venerated Mary because of Jesus, her son.

Come, Blessed Virgin, Bring Your Child to Us

Reflecting upon the Visitation, Pope Benedict XVI once remarked that:

“Whoever opens his or her heart to the Mother encounters and welcomes the Son and is pervaded by his joy. True Marian devotion never obscures or diminishes faith and love for Jesus Christ Our Saviour, the one Mediator between God and humankind.”

This Advent, as we prepare for the birth of our savior, Jesus Christ, let’s begin a renewed devotion to the Blessed Virgin Mary, our Queen and Mother. Mary embodies the eager expectation of her Jewish people for their Messiah king, who would reign on an everlasting throne, bringing peace to humanity and conquering our enemies. As we prepare for Christmas, let’s approach that day with receptive and generous hearts like unto Mary.

Mary’s May Crowning: Part 2, the Visitation

Praying the Rosary in October: The Joyful Mysteries

Dr. Christine Wood teaches theology and philosophy for Catholic Distance University in West Virginia. She is also an adjunct lecturer at the University of Notre Dame, Fremantle, Australia, and the director of the Office of Evangelization & Catechesis for the Archdiocese of Hobart, Australia, where she lives with her husband. Christine is currently a member of the executive for the national RCIA body, Christian Initiation of Adults Network, in Australia. She has also been involved in helping women to discover their identity in Christ through small group communities, Bible studies, and faith formation.

The featured painting—from the Basilica of the Visitation in Ein Karem, a village in the hill country of Judea where John the Baptist was born—is sourced from crossroadsinitiave.com.