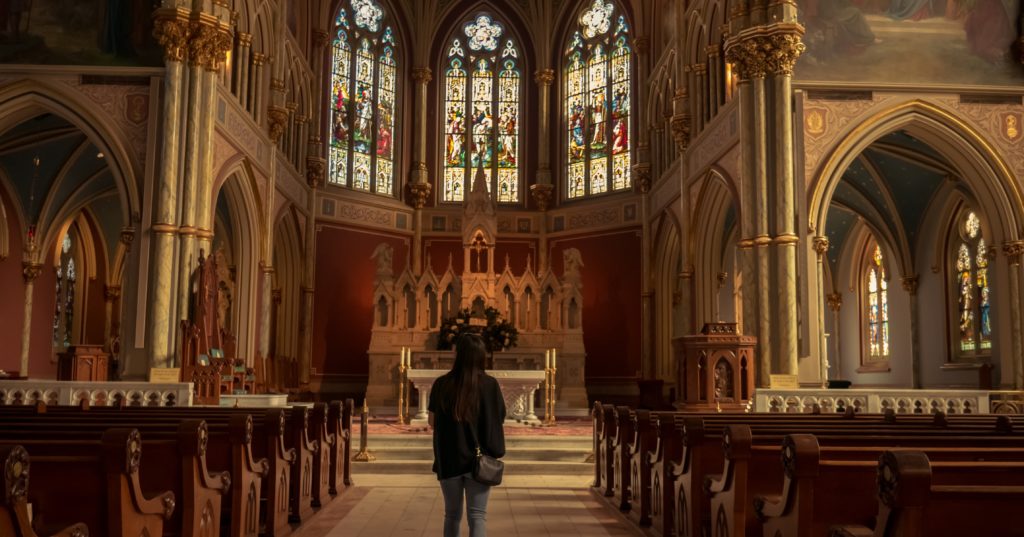 Can you be a practicing Catholic while at the same time denying Jesus’ teaching in John 6:25-71? You may have heard a recent Pew poll found only one-third of American Catholics believe the Eucharist is the Body and Blood of Jesus Christ.

Most have cited a curtailing of catechesis as the cause. Chad Pecknold, however, argued many clergy deliberately catechize disbelief. They treat “the Most Holy Eucharist … as something to be passed out like a leaflet rather than received in awe.”

For Pecknold and Holdsworth, it’s not so much that the faithful haven’t been formed or convinced. Rather, they have been taught a low view of the Eucharist through Masses lacking the dignity, majesty, and piety appropriate to the presence of the Lord. There is a real doctrinal danger in celebrating the Mass as a nuisance, an embarrassment, a begrudged duty, a commonplace activity.

A Trivialization of Divine Love

I’d suggest that this sad ceremonial and doctrinal decline is rooted in a trivialization of the love of God. While we hear frequently about transubstantiation, it is portrayed more like a divine pat on the back. Or it’s treated more as an affirmation of an insecure humankind than a radical divinization of the human being. It’s certainly not treated as a personal transformation through incorporation into the Triune communion of Father, Son, and Holy Spirit.

Because we’ve reduced God to a cosmic life coach, we likewise have relaxed our devotion. Downplaying the Eucharist goes hand-in-hand with downgrading our commitment. We can’t be bothered with genuflecting or Gregorian chant because that would mean that there’s a glory beyond our goals.

Assuming an impassable metaphysical chasm separates us and God is comforting, let’s be honest. For if Christ loves us so intimately and comes to us so totally and humbly through bread and wine, then that would demand of us a self-offering of similar totality and humility. We can live ordinary lives of compromise rather than of extraordinary sacrifice. If Christ does not offer his sacrifice in the Mass then we don’t have to either. It’s no wonder that after taming the Mass and tempering our devotions, we’ve consoled ourselves with the disbelief that Christ is truly there to be aggrieved.

The robustness of the Mass is an expression of the intensity of our love for the Lord who is present on the altar. If we love him fiercely, then we labor for his presence. But if we are lukewarm, then we’re fine not making much of the Mass. If it is true that the Mass is a marriage supper celebrating our matrimonial union with Christ, then we shouldn’t be so stingy.

When we love truly, we cherish. We relish every moment. No detail is insignificant. Everything captivates our attention. We give our beloved our very best and dress well in their company. We offer gifts they desire, not those we prefer to give. Similarly, we don’t rush unthinkingly but spend as much time with them as patiently as possible. We speak intentionally and carefully, and do whatever we can to serve them.

It was love, then, that lay behind the centuries of liturgical extravagance, from which we’ve departed. Love made the faithful build architectural wonders in which to worship, love made the craftsman sculpt stunning statues and blow gleaming stained glass windows. It was for love that the altar was intricately ornamented, for love that clergy donned decorated vestments and celebrated lavish liturgies. Love led to rules about linens and vessels. It is this love for Christ that alone will reestablish the doctrine of the Eucharist and the glory of the Mass.

We need a Mass renewal—a renewal of the masses and of the Mass! Of course, such a renewal can only be the work of the Holy Spirit, and so we must be fervent in prayer and penance. But the Lord never works apart from our intelligent participation, and this means he calls us to join him. So, what can we do as we pray?

We could learn more about the Mass, which would not only promote our participation in it but also help us explain it to those who seem a bit lost. There are some great resources from Ascension, such as A Biblical Walk through the Mass, Altaration: The Mystery of the Mass Revealed, and The Sacred that Surrounds Us.

What I propose to do in this series, however, is to try to recover the love at the heart of the Mass, the love of Christ and the love of the faithful communicant. I want us to see that the movements of the Mass are a journey into the depths of God’s self-communicating love and solicits from us a radical yet rational self-surrender. Yes, we will discover new insights about what’s going on and why. But, just as importantly, we will rediscover the motions of love that will help us make the most of the Mass. We’ll first look at what it means to worship and sacrifice. So stay tuned for more on this topic.

How can we move toward a greater love for God in the Eucharist? Let us know your thoughts in the comments at the bottom of the page.

7 in 10 Catholics Don’t Believe in the Real Presence. How Do We Feel about That?

Dr. James R. A. Merrick is lecturer at Franciscan University of Steubenville, theology and Latin teacher at St. Joseph’s Catholic Academy in Boalsburg, Pennsylvania, and on the faculty for the Diocese of Altoona-Johnstown’s Lay Ecclesial and Diaconal Formation program. Before entering the Church with his wife and five children, he was an Anglican priest and college theology professor in the United States and in the United Kingdom.