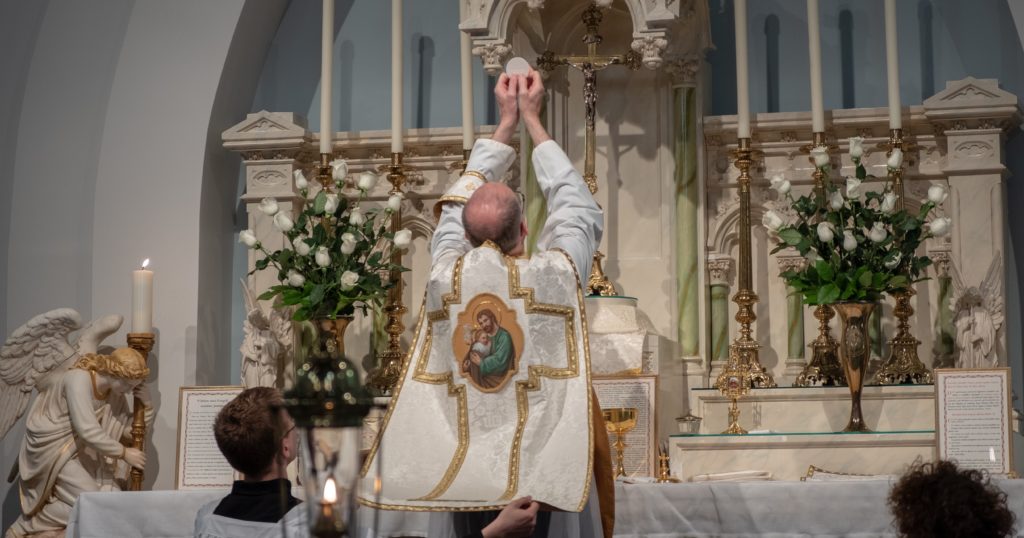 The Eucharist is big. Really big.

“The Eucharist constitutes ‘the Church’s entire spiritual wealth, that is, Christ Himself, our Passover and living bread.’ It is the ‘Sacrament of Sacraments.’”

I think at times I have taken for granted the treasure that it is. Being a cradle Catholic, the Eucharist as the Body and Blood of Christ has always been very normal. It was akin to the fact that the sky is blue. There was no argument from me.

I realize now that I was in error. It was not until I started spending time in Eucharistic Adoration that I began to get an inkling of not just what the Eucharist is, but who the Eucharist is. As this began to seep into my soul, it changed the way I approach receiving Communion. It was no longer a matter of course—this is what we do at this part of Mass. It became the highlight of the Mass.

“The Second Vatican Council rightly proclaimed that the Eucharistic sacrifice is the source and summit of the Christian life. For the most holy Eucharist contains the Church’s entire spiritual wealth: Christ himself, our passover and living bread. Through his own flesh, now made living and life-giving by the Holy Spirit, he offers life to men.”

The Eucharist, in short, changes us. We do not just receive a symbol of our Lord. We receive him in actuality. He then lives inside us.

There are different ways to receive him and there are merits to all of them. Most importantly we must receive him reverently. The host is something of value. It is no longer a piece of bread.

“Each country’s conference of bishops determines the posture to be made for the reception of Communion and the act of reverence to be made by each person as he or she receives Communion.”

In the United States, we have the option of receiving Communion on the tongue or in our hand. We also can receive standing or kneeling. This is our own personal decision and the individual distributing Communion cannot compel us toward one method or another.

“From the time of the Fathers of the Church, a tendency was born and consolidated whereby distribution of Holy Communion in the hand became more and more restricted in favor of distributing Holy Communion on the tongue. The motivation for this practice is two-fold: a) first, to avoid, as much as possible, the dropping of Eucharistic particles; b) second, to increase among the faithful devotion to the Real Presence of Christ in the Sacrament of the Eucharist.”

(Office for Liturgical Celebrations of the Supreme Pontiff)

For those of us who received Communion prior to the late 1970s, this is how we were taught. I don’t mind telling you of the relief I felt as a third grader when we were allowed to receive in the hand. I felt self-conscious receiving on the tongue; like I was sticking my tongue out at the priest. Now most Catholics receive in the hand. We should be sure that our hands are clean and that we make a “throne” for our Lord. If right-handed, we rest our left hand on top and take the host to our mouth with our right. Reverse that if left-handed. It is not OK to reach out and take the host. We must receive it. Since we are handling something of great value, we want to be sure to be respectful and reverent.

We respond “Amen” in a clear voice as a response of faith and acknowledgment that we believe the host and wine are the real Body and Blood of Jesus. We should also consume the host immediately. One objection to offering Communion in the hand is that someone with unholy intent could keep the host for desecration.

If the Eucharist is offered under both Species (Body and Blood), we may opt to only receive the Body. While many Eastern Catholic Churches dip the Body into the Blood (intinction), in the Roman Rite it is not the norm. This is not for health reasons; it’s just a matter of different traditions. Similarly, some worry about getting sick from drinking out of a cup that many others have sipped from, but in my personal experience of taking the Blood every Sunday, I have never gotten sick. I like to think Jesus takes care of that for us.

Why I Changed How I Receive

A year ago my opinion on how I receive changed. I knew several people who received on the tongue and there was something attractive about it. The Holy Spirit was giving me a nudge. I still felt self-conscious, although now it was because most people receive on the hand and I did not want to be seen as overly pious. One winter Sunday a lovely, albeit sick, family sat behind us and after listening to them cough and then shaking hands for the sign of peace, I made a decision. Having no wish to get sick myself, I opted to receive Holy Communion on the tongue. It was a little strange, but I liked it. It felt more respectful to me and I liked that it made me feel self-conscious because it made me more present to what I was doing.

This is not just a march up the aisle to get a snack; this is a procession to receive spiritual food, the best food. So I continued and while I still feel a little awkward, (how far out do I stick my tongue? Did I open my mouth wide enough? Will this Extraordinary Minister of Holy Communion be caught off guard?) I like it. Receiving on the tongue can be an act of humility but for some, receiving on the hand “makes them feel more connected to Jesus Christ himself”  (Catholic News Agency).  Happily, here in the United States we have a choice.

Another way to receive is to kneel. Now that most churches have done away with altar rails, this is less common but still legit. If we opt to not kneel, we are expected to bow respectfully prior to receiving. It is Jesus after all.

Reaching from Heaven to Earth

While Vatican II did not suggest altar rails be removed, they fell out of favor shortly after the council. Altar rails were seen as fences: ways of separating the priest from the people. Kneeling was considered too submissive to modern tastes. Architecturally they were not intended as such. Altar rails were designed to designate the sanctuary. Sanctuary comes from the word “holy” which means “set apart.” The low and permeable altar rails which included gates were considered a visual marker of where heaven and earth meet.

“The priest, acting in persona Christi, reaches across from heaven to earth to give the Eucharist as the gift of divine life.”

Being able to both be present with the Real Presence of Christ and to receive him—body, blood, soul, and divinity—is a privilege. God, in his wisdom, gave us this precious gift of his son. What a blessing to receive him into our bodies and hearts.

Desire for Communion Leads Mennonite to the Catholic Church

Addicted to Social Media, Helping the Homeless, and Communion on the Tongue