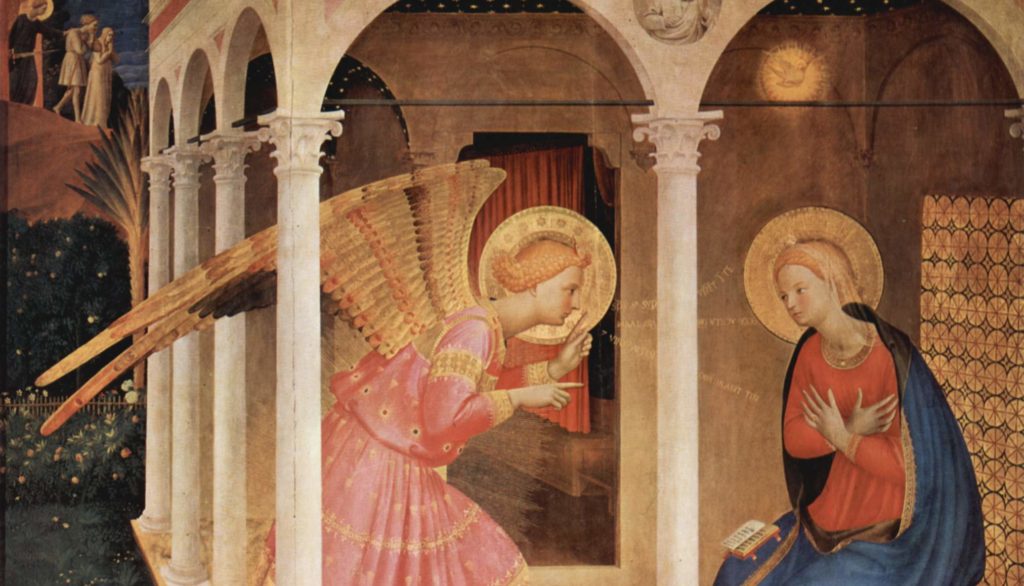 Okay, you saw two wings and a halo, right? Perhaps a white robe? Some glowing light?

Where does that mental picture come from? Maybe from a painting you’ve seen, or possibly a movie. Do you know that Scripture doesn’t always depict an angel as having two wings? We see six-winged and four-winged angels even more than angels with just two (Isaiah 6:2, 6; Ezekiel 1:6; Revelation 4:8). We see angels adorned in white and in light, but truthfully, our perception of angels often comes more from the depictions we’ve seen in art or film than from the word of God.

People have always had a fascination with angels. Whether in paintings or on television, artists still offer various and varying interpretations regarding angels – what they look like, and how they behave. Some people even think (or “hope”) we will become angels after we die. To be clear, we will not. We can become saints, but not angels. It is important to state that even more emphatically in this modern culture when people so quickly blur the line between tradition, legend, myth, cliché and amalgamations therein. Many “post-moderns,” too, outright dismiss angels and all else “unseen” as untrustworthy, relegating the spiritual life to little more than that which occurs upon a yoga mat.

To be clear, angels absolutely exist. Our Lord Jesus, Himself, attested to this fact repeatedly throughout the Gospels.

A Catholic, Biblical View of Angels

The name “angel” comes via ecclesiastical Latin, from the Greek word angelos or the Hebrew word malakh, both meaning “messenger.” Angels are pure spirit, in other words, they have no physical bodies. Angels do, however, take on human form sometimes, as clarified by St. Thomas Aquinas in his Summa Theologica, and as you can read more about in the book of Tobit, for instance.

I find it helpful to go back to the Bible as our obvious primary source to get a more accurate picture of what angels are, what they do, and the purposes they serve. Let’s look at just two of the hundreds of passages in which Sacred Scripture attests to the presence – and activity – of angels:

Behold, I send an angel before you, to guard you on the way and to bring you to the place which I have prepared. Give heed to him and hearken to his voice, do not rebel against him, for he will not pardon your transgression; for my name is in him. “But if you hearken attentively to his voice and do all that I say, then I will be an enemy to your enemies and an adversary to your adversaries. “When my angel goes before you … and I blot them out. (Exodus 23:20-23)

God’s faithfulness is a protecting shield. You shall not fear the terror of the night nor the arrow that flies by day, nor the pestilence that roams in darkness, nor the plague that ravages at noon. For God commands the angels to guard you in all your ways. With their hands they shall support you, lest you strike your foot against a stone. (Psalm 91:4-6, 11-12)

Now, too often we think of angels, who are heavenly bodies, in earthly, bodily terms. They are not human and therefore not bound by human constraints. They exist to do the will of God, to be His messengers, guides, and defenders – of us and of truth. It’s important, though, to remember that they are not to be worshipped (Revelation 19:10; 22:9); they exist for the sole purpose of praising God and carrying out His will.

One of the areas in which people seem supremely “confused” in their theology of angels is in regards to their purpose. Many people are unsure about the differences between the types of angels, the roles they play, and what makes them different.

It was in about the fifth century or so (most believe) that these different “ranks” of angels or “choirs” of heavenly angelic hierarchy was established. The choirs of angels are as follows:

Of the nine choirs each has different functions:

(You can read more about them in the Catechism of the Catholic Church, 327-336.)

Obviously, the three most famous angels (besides Satan, the fallen angel) are Sts. Michael, Gabriel, and Raphael. You can read more about each:

It’s interesting to note that names “matter” even to angelic beings without matter. The name “Lucifer,” for instance, means “light bringer” echoing his obvious, prideful desire to be seen in comparison to the true Light, God Himself. Not ironically, however, we see that the name of God’s great warrior “Michael” means, “who is like God?” … a humble and enduring testament to the true source of life and grace.

Additionally, (for those keeping score at home) Gabriel means “God is my strength” and Raphael means “God has healed.” These are but three of the archangels, each one yielding tremendous power, and worthy of an invitation to intercession.

I know that, personally speaking, the St. Michael Prayer has become commonplace within our home and within my daily life. Several times throughout the course of my day, I utter that prayer of protection, bidding St. Michael and his legion of angels to accompany me, or my family, through treacherous situations.

If you don’t know it by heart, commit it to memory:

St. Michael the Archangel,
defend us in battle.
Be our defense against the wickedness and snares of the Devil.
May God rebuke him, we humbly pray,
and do thou,
O Prince of the heavenly hosts,
by the power of God,
thrust into hell Satan,
and all the evil spirits,
who prowl about the world
seeking the ruin of souls.

As you’ve most likely read or learned in your own ongoing studies, angels have played (and continue to play) significant roles in God’s plan of salvation.

These are just to name a very few. What do all of these instances have in common? God used His angels to aid in the rescue of His children. Angels are a primary way in which He is constantly delivering us from evil. Angels proclaim the greatness of God, echoing the good news of salvation in the heavens and throughout the earth. Though “higher” than us spiritually, they serve God in their actions toward us. In fact, God loves us so much that He actually “assigns” a guardian angel to each one of us.

The Old Testament attests to guardian angels repeatedly (Genesis 48:16, Psalm 34:7; 91:11; Tobit 12:12-15). These guardian angels enjoy constant and intimate “access” to our Father in Heaven. Our Lord, Jesus, gave us tremendous insight into our guardian angels in Matthew 18:10, saying, “See that you do not despise one of these little ones; for I tell you that in heaven their angels always behold the face of my Father who is in heaven.”

Note that while our guardian angels are fully “present” to us, they are also completely present to and beholding the face of our heavenly Father (Tweet this). Talk about divinely-inspired GPS, always pointing us back to heaven! This is an unfathomable gift, should we choose to humble ourselves and follow God’s promptings.

Our Church even established a feast day (Oct. 2) to serve as a memorial and celebration even in honor of guardian angels. Nightly, I (as I’m sure many of you do) invoke the Guardian Angel prayer with my own kids as we end our bedtime prayers.

As St. Angela Merici said, “Remember that the devil doesn’t sleep, but seeks our ruin in a thousand ways.” Just because we go to sleep, doesn’t mean the devil rests or stops trying to pull us away from Jesus. As a fallen angel, the devil does not necessitate sleep… on the bright side, our guardian angels don’t need sleep either. There could be no better reminder to our next generation of both the gift and need for our guardian angels – for God would not have given them to us if we did not need them.

Oh angel of God, my guardian dear
To whom God’s love commits me here
Ever this night be at my side
To light and to guard, to rule and to guide.
Amen

Take a minute now to thank God for the gift of your guardian angel and invite that angel to pray with you. Think of them as a sort of heavenly police force; guardian angels protect and serve. They protect (us) and serve (God), but they don’t eat donuts – just to be clear.

It’s impossible to do justice to all we could cover on angels in just one blog post. The more we become aware of the movement of angels around us, however, the more we’ll believe in God’s active presence in our lives.

For more on angels, see:

And be sure to check out the writings of St. Thomas Aquinas, most specifically the Summa Theologica, in which he devotes substantial space to the reality of angels, their abilities, “limitations,” and purpose.

What are your thoughts? Have you ever experienced the presence of your guardian angel, or any other angel, in your life? If so, in what way?

Four Sides of the Same Coin: When the Gospels Disagree

Texting Was God’s Idea: The Bible and Modern Teens