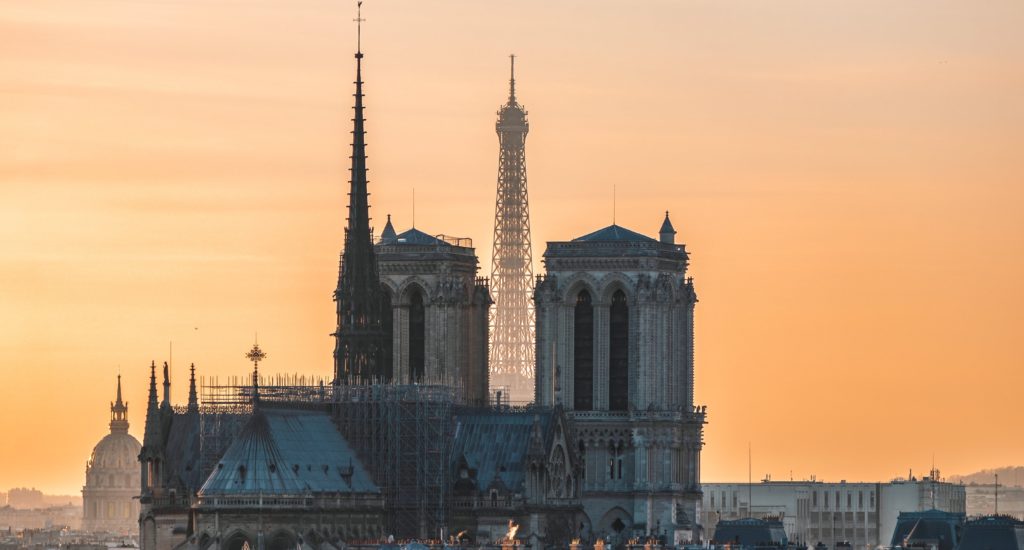 As I watched the billowing smoke and flames erupt from Notre Dame Cathedral in Paris, I couldn’t help but think of my fellow Catholic brothers and sisters of France. I’ve never visited France or the cathedral. The closest I’ve gotten to a church dedicated to Our Lady under that name is one on a campus in South Bend, Indiana. But my heart, like that of all the faithful, sank at the sight of the images all over the internet and TV news stations.

As I watched the news coverage that evening of the fire, I came to the not-so startling revelation that many people in our culture don’t understand the significance of Notre Dame Cathedral. The reason for this is that many do not view the world through a sacramental lens. What this tragedy has shown us is really a deeper problem throughout Western Civilization. Many people no longer believe in the sacramental and the mystical meaning of church buildings. It is our duty as Catholic Christians to fix that problem.

Dedicated to Our Lady

It’s important to look at many of the headlines that described the fire. Many of the descriptors used are confused, not truly showing the sacramental reality of what the cathedral is. But then, it’s hard to expect such an accurate description of the cathedral from secular sources. A brief look at some of the bigger headlines:

“Mutilation of national icon that survived ravages of revolution”

“Paris weeps for its beloved lady”

One writer put it this way in his short piece on what transpired, saying:

“Notre-Dame has become an icon, easily recognized by many people as representative of human culture…”

A representative of the United States Congress described Notre Dame in this way:

“Art and architecture have a unique ability to help us connect across our differences and bring people together in important ways. Thinking of the people of Paris and praying for every first responder trying to save this wonder.”

Do you notice a common theme with these descriptions? They regard the cathedral as not a house of worship or a temple of God, but instead as a national landmark. As many other headlines mistakenly reported, it is not the building itself that is the “beloved lady”. It’s Mary, the Mother of God that we venerate as Our Lady, and the Church is dedicated to her.

The focus is more on the art and architecture instead of the sacramental reality that is the church building. Yes, sacred art is very important in leading others to a deeper appreciation of the mystical realities we experience during the Mass. But we must not overlook the truth that this building is a microcosm of the one, holy, catholic, and apostolic Church founded by Jesus Christ. Those headlines I mentioned use the word “icon” very poorly, making the cathedral out to be something built merely for the good of human culture. No, this is not true. Notre Dame Cathedral is an icon of Christ, who is the head of his Mystical Body, the Church.

Do we expect non-believers to speak with this language? Of course not, but that doesn’t diminish the reality of what those walls and structures represent in the truest sense. It is true that this church building, and all duly consecrated church buildings throughout the world, are a physical representation of Christ’s body on earth. The tradition of the Church, as found in the Catechism of the Catholic Church, says it well (emphases mine*):

“Christians construct buildings for divine worship. These visible churches are not simply gathering places but signify and make visible the Church living in this place, the dwelling of God with men reconciled and united in Christ…

“[T]he church has an eschatological significance. To enter into the house of God, we must cross a threshold, which symbolizes passing from the world wounded by sin to the world of the new Life to which all men are called. The visible church is a symbol of the Father’s house toward which the People of God is journeying and where the Father ‘will wipe every tear from their eyes.’”

Images of the Heavenly Jerusalem

Notre Dame Cathedral (and again, any Catholic church) is not just a mere conglomeration of stones, bricks, wood, and other building materials. It’s not a museum with pieces of fine art, or a meeting house where people come to share a meal. It’s not a microcosm of Jesus’ Church only for believers and something else for non-believers. It actually is an icon of Christ. The sacrifice that saved humanity is present there each and every day!

Never forget that Jesus inseparably joined himself to his body, the Church, as he is the head (see Colossians 1:18). One cannot have Jesus without the Church. Thus, we build churches to make this invisible, mystical body visible to those of us sojourning here on earth toward that happy home which is the Father’s house. As the Catechism summarizes:

“Our visible churches, holy places, are images of the holy city, the heavenly Jerusalem, toward which we are making our way on pilgrimage.”

The Sacramentality of a Church

The Greek word for “icon”, εἰκών, literally translates to “resemblance” or “image”. So just what does it mean for a church building, like Notre Dame, to be an image of “the heavenly Jerusalem”? Dr. Denis McNamara, associate professor and academic director at the Liturgical Institute in Mundelein, Illinois, puts it much more eloquently than I, so I quote him at length from a spectacular essay:

“[T]he church building is an icon of the full living church of the Heavenly Jerusalem. The metaphorical association of the members of the Church (including the angels, saints, et al.) with the church building takes its cue from scriptural language itself. Christ, of course, is the stone the builders rejected who has become the cornerstone (Mt 21:42, Mk 12:10, Lk 20:17)…

“Peter calls Christians ‘living stones’ built into a ‘spiritual edifice’ (1 Pet 2:4), a phrase used by the American bishops in naming their own document on church architecture, Built of Living Stones. So the church building, then, is an icon of the Heavenly Jerusalem, which itself is made up of the Trinity and celestial beings surrounded by living stones of the saints. Making this invisible spiritual reality appear to us in material form is the very essence of the sacramentality of a church building.”

Pointing Us Toward Heaven

We as humans are a unity of body and soul. We are incomplete if we are lacking one of these. Therefore, it is fitting that we use matter to make those spiritual realities around us present. This is most clear to us in the sacraments, as we can feel the waters of baptism, taste the Eucharist, and smell the holy chrism of anointing. Likewise, the church building, through its sacred architecture and art, brings us to the mystical wedding banquet described in Sacred Scripture. The “invisible spiritual realities” materialize before us in the form of cathedrals like Notre Dame! Again, the church building is a microcosm of the Mystical Body of Christ himself. You and I are integral members of that body through our common baptism.

The Church has constantly been aware of this throughout the ages, right up to our own day. The Second Vatican Council couldn’t have been clearer on this point. The Council mentions in its Constitution on the Sacred Liturgy, Sacrosanctum Concilium. Sacred art and architecture, like church buildings as a whole:

“by their very nature, are oriented toward the infinite beauty of God which they attempt in some way to portray by the work of human hands; they achieve their purpose of redounding to God’s praise and glory in proportion as they are directed the more exclusively to the single aim of turning men’s minds devoutly toward God.”

Notre Dame Cathedral turns man’s mind toward God. But secular culture has a strong grip on society. Too often, this culture quickly snuffs out any attraction to the spiritual. And this is where we as Catholics need to step in. We need to let others know of the sacramental realities that exist. We must let our peers know that we are not merely weeping for the loss of art. Of course, we don’t want to see any of these beautiful images and structures destroyed, as they work to lead people to God. But we weep because fire has badly damaged this temple of God, where the faithful have celebrated the sacred mysteries for centuries.

We don’t weep for a building. We weep for the Church, which this cathedral is an image of.

Catholic artist Daniel Mitsui gave a lecture a couple years back, and many people shared this snippet on social media following the fire. We would do well to reflect on this:

“The treasures of Christian art and architecture are today endangered: by indifference and neglect, by misguided renovation, by war and revolution. They may be preserved for a time for the sake of national identity or lofty but indifferentist notions of cultural worth. But the Lindisfarne Gospels and Chartres Cathedral are things of this world, and will not last forever: Rust and moth consume, thieves break in and steal [Matt. 6:19]. More tragic than to lose such treasures is to lose the ability to make them; more tragic yet is to lose the desire to make them. That desire can only be provided by religious faith. It is religious faith that animates the tradition, that makes it live rather than linger.”

Build a Civilization of Love

Religion is not a dirty word. The world needs religion, that is, God’s holy religion. And it’s that religion, that faith, which rouses us to create the beautiful churches that we see throughout the world. Many have pointed out that the fire at the cathedral really was emblematic of the current state of the Christian faith in France, and Europe as a whole. I’m sure many people saw the toppling of the burning spire as a grim reminder that Christianity is falling apart there, that it is lingering instead of living.

We, as faithful Catholic Christians, wherever we live, must work to change that. I was emboldened to see many young Catholics singing hymns and praying as they watched the cathedral erupt in flames. Our Lord did promise, after all, that the gates of hell would never prevail against his Church (Matthew 16:18). Hopefully this will be the spark to revitalize the faith in France, Europe, and abroad. That Catholic Christians will proclaim the spiritual realities that exist around us. That they will encourage their families, friends, and peers to embrace the sacramental worldview. Because only with this lens will we be able to clearly see the path that leads us to the loving Father’s house in the Heavenly Jerusalem. As Pope St. John Paul II reminds us:

“The future is in your hearts and in your hands. God is entrusting to you the task, at once difficult and uplifting, of working with Him in the building of the civilization of love.”

Our Lady of La Salette, pray for us!

The Sacred That Surrounds Us: How Everything in a Catholic Church Points to Heaven (Book)

Photo by Colin Schmitt from Pexels

*All bold emphases in this article are Nick LaBanca’s.