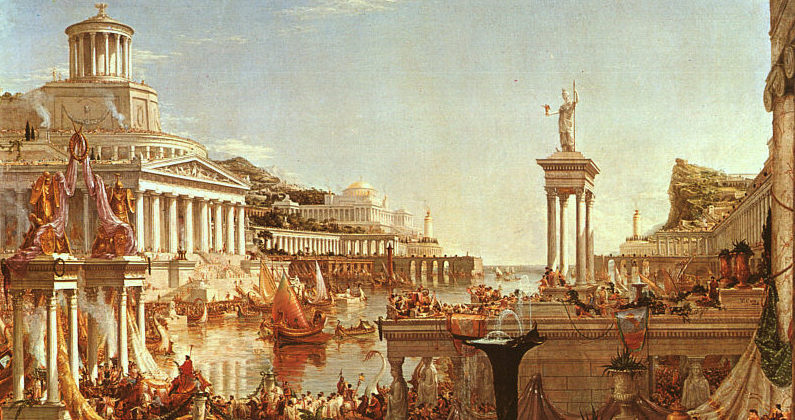 Jesus came into the world a little over two-thousand years ago. That is a historically demonstrable fact. So, we know it happened. But why did it happen when it did? Scripture tells us that the reason he came was to save us. Seems simple enough, but there are some questions. What was he saving us from? Why did he need to become a human to do it, and why wait thousands of years to do so? What was God up to?

In the Genesis story, we learn that God created mankind in his own image. He set us in a paradise, where we lived in relationship with the Lord. Unfortunately, it didn’t work out. Almost immediately man fell into sin. What was the sin? We can look to the words of the serpent in Genesis 3 for insight.

“But the serpent said to the woman, ‘You will not die.  For God knows that when you eat of it your eyes will be opened, and you will be like God, knowing good and evil.’”

Adam and Eve disobeyed God, which is bad enough, but in doing so they began something much bigger and worse than one simple act of disobedience. You see, the choice the devil offered Eve was not that she would eat the apple, and then have some sort of abstract knowledge of what is right and wrong. Instead, eating the apple meant that Adam and Eve would know good and evil. There is a difference between the idea of good and evil and the experience. A person might know of a celebrity, but would not actually know the celebrity until they met that person.

That is, essentially, what happened to Adam and Eve in the Garden. By disobeying God’s prohibition against eating from the tree of knowledge of good and evil,  they “knew” sin. And once they knew it, they could not un-know it. Reality; what it means to be human changed. Sin came into the world, and brought its effects into the human experience.

The Law of Death

That was disastrous. Adam and Eve had been made in the likeness of, and created for everlasting union with, God. Now, through their choice, the law of sin and corruption gained dominion over them. Just as God had warned, death did come into the world. Physical death, and spiritual death. From that point forward, sin ran rampant, bringing with it murder, rape, idolatry, and every imaginable kind of depravity. Man, created in the likeness of God was slowly, through sin, being unmade. Man, made for grace, over time became almost indiscernible from the other, lower creatures. Saint Athanasius, in his work, On the Incarnation of the Word, puts it this way:

“The human race was in the process of destruction. Man, who was created in God’s image and in his possession of reason reflected the very Word Himself, was disappearing, and the work of God was being undone. The law of death, which followed the transgression, prevailed upon us, and from it, there was no escape.”

To Save What Was Lost

Had God left us on this course, we would have ceased to be what God inherently created us to be. Rather than going on in the image and likeness of God, man would have become nothing more than a beast. God, being good, and having created man out of goodness, and to know his goodness, could not let that happen. But, God is Truth, and to break his own law was not possible either. God needed to recreated man. So the very Word, through whom God spoke man into being, Jesus, came into the world and took on human frailty, and brought to it his divine person. He offered his own life to give humanity new life. St. Athanasius again, lends some beautiful insight:

You know what happens when a portrait that has been painted on a panel becomes obliterated through external stains. The artist does not throw away the panel, but the subject of the portrait has to come and sit for it again, and then the likeness is re-drawn on the same material. Even so was it with the All-holy Son of God. He, the Image of the Father, came and dwelt in our midst, in order that He might renew mankind made after Himself, and seek out His lost sheep, even as He says in the Gospel: ‘I came to seek and to save that which was lost.'”

But, why did it take so long?

Why not come immediately after the Fall? There is no way to know for sure, but we can speculate. Here are a couple possibilities.

We Tried the Other Ways, They Didn’t Work.

If we follow the course of salvation history, we see a process of God’s calling out to man, and man failing to accept that call. Scripture shows us covenant after covenant in which God offers himself perfectly to humanity, and humanity responds in imperfection and failure. From Adam to Noah, to Abraham and Moses, God is constant and mankind, time and again, is unfaithful. Through the history of his chosen people, God allowed the truth that there is no salvation for man possible within the power of man, to be illustrated. Man can’t correctly follow the law. Man cannot offer perfect sacrifice. What the Old Testament covenants show repeatedly is that man cannot do it alone. The only one capable of entering into a perfect covenant with the Lord would have to be a perfect, eternal, constant person, i.e. God himself.

So, why did God come then? Because it was at that point in the story of salvation, and human history, that it would be most clear that a savior was needed.

Another possibility is that the state of the world was at just the right place. You see, it is often speculated that Christ’s mission and the apostolic mission that followed it was ideally suited to a world dominated by Rome. Consider for a moment that under Roman rule, a good portion of the Middle East, North African, and European regions were all connected under the same monetary, military, and linguistic systems. A Jew, like St. Paul, could travel throughout the Roman Empire in relative safety, speak to people of many nations and cultures in a universally understood language, Greek, and share the good news of Jesus Christ.

Add to that the fact that the Romans were also a remarkably tolerant culture regarding the practice of other religions. Yes, Rome had its pantheon of gods, but do not forget that even this was adopted from a previous civilization, the Greeks. One of the strengths of Rome was that instead of obliterating the cultures it ruled, it took and Romanized them.

In addition to those factors, philosophers like Plato had even reasoned that there must be a creative being outside of creation that acted as a cause, laying a foundation stone for the Church to build upon.

At the Perfect Moment

Quite frankly, Rome was the first point in human history that such a combination of favorable factors came together in such a way as to make the rapid spread of Christianity possible.

Also, let’s not forget, that upon the conversion of Constantine, Rome itself became not only a favorable cultural context but the vehicle through which Christianity spread.

So, while there is no absolute answer to why Christ came when he did, it is possible to try and figure out from hindsight what God may have been up to. With that said, what we can know for sure is that Jesus’ life, death, and resurrection were necessary for our salvation and that he came at the perfect moment because it was the moment that God chose.

With that in mind, don’t take for granted the fact that many men and women have accepted the good news of Christ, and have handed it down over the centuries so that you too might be saved through him.

Why Did God Ask Abraham to Sacrifice Isaac?

Why Preaching Christ Crucified Is Necessary