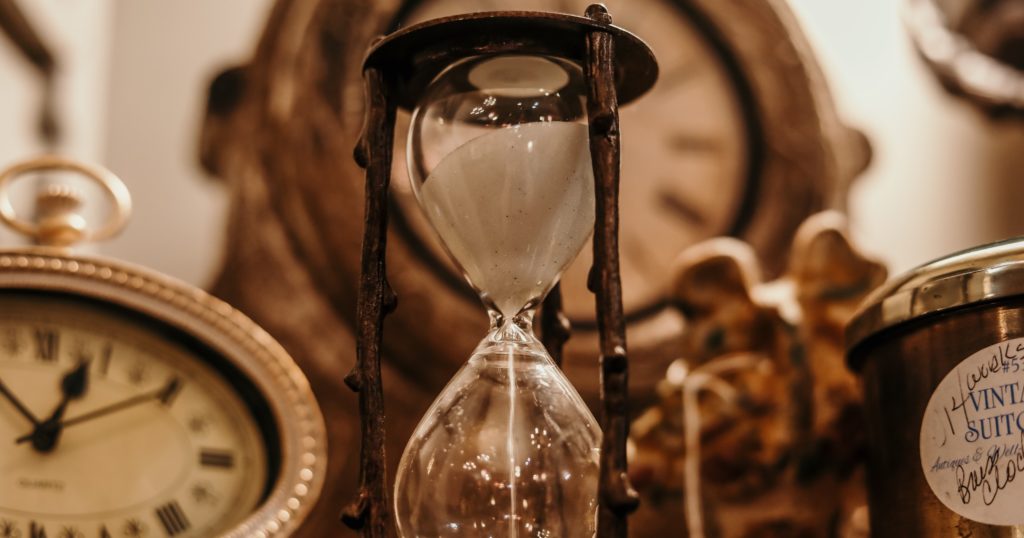 “Excuse me. Can you tell me what time it is?” Kerry asked a passerby.

The stranger took out her smartphone, and said, “Ten to two.”

“Thank you,” replied Kerry with a reserved look on his face. He said thank you, for what else would you say to someone who grants your request for the time? But in his heart he was angry at the stranger, because she held the device that revealed Kerry’s fate: He was the victim of another infamous weekday afternoon that was dragging on, showing no sign of passing by any faster.

Too many weekday afternoons end up this way for him: He’s crunched for time at 1 pm as he runs out to grab lunch at the corner deli of his office’s block—eighty-seven steps from his office building’s lobby. In a rush to get as much time for lunch as possible, he often leaves his phone on his desk. Everyone always seems to be going the other way, probably off to have fun somewhere, by the time he is returning to his cubicle around 1:37 pm.

Too Little Time Too Many Times

Even though he usually returns from lunch five to ten minutes late everyday, he decided to take an especially long lunch today because his habit of always rushing wasn’t solving any of his problems. When the stranger revealed that he was only thirteen minutes off-schedule, he was incredulous because he could have sworn he had dilly-dallied for at least an extra half hour. He was already preparing the speech he would give his boss if she made an issue of his long lunch. But for thirteen minutes, she most likely will let it slide. Thirteen minutes late is borderline excusable.

Besides, Kerry never does this. His boss could just as well think the lunch line at the deli took an extra long time today. The last thing she’ll think is that Kerry was having an existential crisis that made him think of leaving everything behind and making a run for it.

“It’s not too late,” Kerry thought to himself as he approached the entrance to the office building. “I could just keep walking.” What may be waiting for him on that road past his office—all the possibilities—were a mockery of his current state in life. All of the things that defined him seemed to confine him: his boring insurance salesman job, his marriage, his house, his friendships, his religion. He left this morning as a fight with his wife still lingered. The house was getting “too small”, he’d say again and again, now that they had a third child. All of his friends lived too far away. The Faith required too much time commitment to have an effect.

How It Drags On

But that was his misconception. Time. All these things seemed to cage him in, but the only real cage was his concept of time.

Kerry gave his best friend Chris a call after that dragging work day ended. He told Chris how he just doesn’t have the energy he used to have when they were friends in college. Chris, being a good buddy as always, reminded him of the Kairos retreat they went on their freshman year, and how they committed themselves to a life of mission sharing the good news of Jesus Christ. At first, Chris thought it was just hot air, a desperate attempt to help a friend apparently in much deeper need—but then things got interesting.

The conversation got philosophical, as often happened when they talked, because for them philosophy was a place of solace rather than a phase for sophists. They talked about time density. Don’t bother googling it, because it’s a silly phrase they just made up to describe how time seems to fly when you’re having fun, and drag on when you’re not. The more an hour or day seems to drag on, for instance, the higher its time density.

“This isn’t a new concept,” Kerry reminded Chris. “We’ve talked about it often, as many people have.”

“But I’m glad we brought it up again, because I think you forgot about your special power,” Chris replied.

“Oh, right, my special power. You know that was just a joke, and I was just playing along with you, right? I bet you’re gonna tell me all about it again though, aren’t you? What did we call it, something vision?”

“We called it eternity vision,” Chris answered, “and it used to help you see time as a temporal thing. Stuck in a difficult moment, you would just say ‘It’s OK. I’m just passing through,’ and you’d then have the ability to carry on—even in those moments with the greatest time density.”

Chris went on, “The jobs you would endure: twelve-hour days digging ditches and hauling bags of mulch and what not, while working through grad school and having a baby on the way. It’s a wonder you got through any of it. Only with this special power of eternity vision could you do it. You used to say something like, ‘When you understand that we are only on this earth for a little while, and we were actually made for eternity, you can rest in the fact that time—and all its shenanigans—will only bother you for a little while.”

“Yeah, I know, but lately the drudgery of life has been getting to me, I’ll admit,” Kerry said.

“I still have no idea why you called me, then,” Chris replied. “You’re usually the one to drag me out of such ruts, like the time my college sweetheart dumped me and I thought there was no longer anything to live for. You just shrugged your shoulder and said, ‘Eh, you’ll be all right. The timing wasn’t right. And you know what they say, ‘If the timing isn’t right, it’s not meant to be.’ You had this way of seeing life’s big picture. At that phase in life, right after college, you knew we were just wound-up twenty-somethings who thought if something didn’t happen at that time of our life it would never happen. But you also had the vision to see past that.”

Chris reminded Kerry of how he should take his own advice and look at the big picture, but it only brought Kerry greater despair.

He paused for a moment, and Chris remained silent because he sensed something in the silence. He sensed the kind of remedies that come from nothing but rest. It’s as if all of their philosophical conversations about life from years past until now were reaching a crescendo.

“That’s it,” Kerry said in a soft but solemn voice. “Kairos.”

“Eight to four, nine to five, an hour of this, an hour of that. All this time … ah, I just can’t avoid that word! All this time, no pun intended, I thought time mattered,” Kerry said, inspired. “It’s done nothing but bring me despair and anxiety. Chronos and kairos, remember? Chronos refers to chronological or sequential time, while kairos signifies a proper or opportune time for action. When you brought up the advice I gave you about your girlfriend in college, I remembered something. The kairos wasn’t right for you and her.

“Remember what Gandalf said to Frodo, at the end of Return of the King before they headed for the Grey Havens. ‘It is time.’ Everything had come to pass,” Kerry said. “It wasn’t some special day on the calendar. The great events that defined Frodo’s story had nothing to do with minutes or hours or days or months or years or age. It had to do with key moments, and this is the way God works.

“In salvation history, he is not so concerned about when something is happening. People thought Sarah and Elizabeth were barren when they became pregnant with Isaac and John. Jesus said you know not the hour or day he will come back. Time and time again … ah, that word! … anyway, time and time again, no pun intended, God is showing how he doesn’t work according to our schedule—he doesn’t work according to our concept of time.”

“But there are many other times in Scripture when he does use time to send a message,” Chris interrupted. “The Israelites spent forty years in the desert, and Jesus spent forty days. Even the stars, which are on a very exact time cycle, aligned to proclaim the coming of Jesus in the flesh.”

Kerry answered, “Yes, OK, sometimes … oh, now I just can’t stand this … sometimes, no pun intended, he uses time to convey something to us, but he has also made it abundantly clear that time is not a factor when it comes to accomplishing his will. So we can say with great confidence that when Christ died on the Cross for our sins, he died once and for all—meaning that one pivotal event in salvation history saved all people, before and after it happened, so long as they believe in him and follow his commandments.

Kerry went on, “Can’t you see the significance of this? All this time … OK, now it seems like I’m doing this on purpose … all this time, no pun intended, I’ve felt like when I accomplished my big life goals mattered. I felt it mattered how much time I devoted to them each week. I felt that if I didn’t accomplish them by a certain time in my life, I might as well give up on them. If my pathetic unintentional puns mean anything significant, it’s that I’ve given time too much attention. I’ve given time too much time to mess with my mind.”

Chris then asked, “So that’s why you’re so downcast? You felt like there’s no point in pursuing your dreams because it’s too late? You had big ambitions, but then life happened and you feel like you had to sacrifice them?”

“Yes, and I did,” Kerry told him. “But it’s like Christ said, ‘Whoever loses his life for my sake will find it.’ God wasn’t waiting for me to reach my twenties or thirties. He is waiting for me to give my heart to him completely and trust that he will provide the opportunity.”

“That’s what the Kairos retreat was all about, living the fourth.”

“Yes, I took all of that to heart and it’s been dwelling there. But when I did Kairos, it wasn’t my kairos. Now is my kairos.”

Photo by Jordan Benton on Pexels

Hope and Healing in Times of Trial (podcast)

Prayers for Times of Suffering, Trial, and Anxiety

David Kilby is the editor of the Ascension Blog. He received his undergrad degree in humanities and Catholic culture from Franciscan University of Steubenville. David has served as a journalist for Princeton Packet Publication, and the Trenton Monitor. With the latter he also has a monthly column called Rambling Spirit.