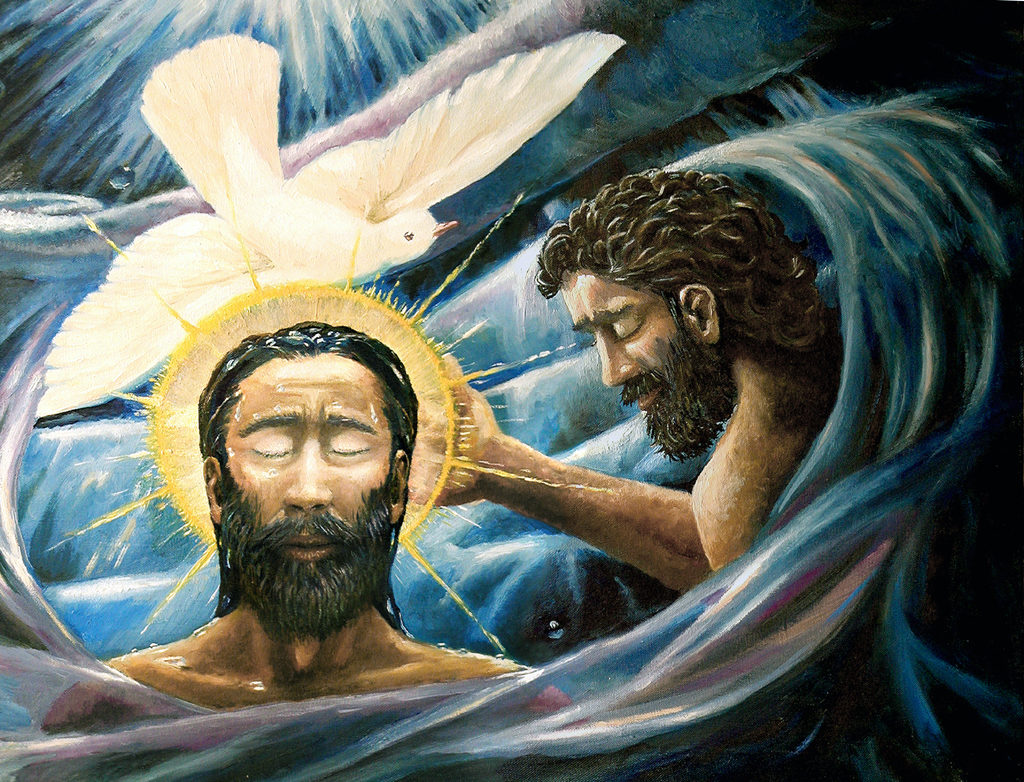 John the Baptist was a mighty prophet, a prophet like the Jews had not seen for hundreds of years. It is easy for modern readers to miss that. John was a very big deal. His message was simple, “Repent. Prepare the way of the Lord.” Scripture says that great masses of people from all of Judea came to him. They came to receive his baptism of repentance. They came to publicly say, “We are sinners. We have offended God!”

It must have been powerful to see so many publicly turning towards repentance. But then, something very odd happened. Jesus came from Galilea, and asked John to baptize him as well. Jesus was, is, and always will be God. He is perfect. Jesus asking John to baptize him is backwards. The baptist’s own words made it clear that John fully understood this, “I need to be baptized by you, and yet you are coming to me?” (Matthew 3:14)  It is all wrong, or at least it seems wrong. Jesus has no need of John’s baptism. And yet, this is his first recorded act in all four Gospels.

There is obviously something important happening here. We, as readers and followers of Christ, must ask the question, “Why does he do it?” Why does he travel from Galilea to Judea to be baptized by John when he has nothing, personally, to repent for?

The short answer? Us.

Not Only His Death but Also His Life

Jesus went to be baptized by John not because he needed it, but because we do. This baptism of repentance was not incidental. It is a major moment. It is part of the righteousness of God that Jesus has come to accomplish. He went to John to take on the baptism of repentance, not for himself, but for us. For humanity. Jesus, in the waters of the Jordan, descended and took on the sin of the world. Benedict XVI puts it this way:

Jesus loaded the burden of all mankind’s guilt upon his shoulders; he bore it down to the depths of the Jordan. He inaugurated his public activity by stepping into the place of sinners. His inaugural gesture is an anticipation of the Cross. (Jesus of Nazareth, Doubleday 2007, 18)

And from that point forward Jesus begins the work of the Cross.

Too often when we contemplate the Cross, we see only Christ’s passion. Yes, the passion is important, but Christ did not wait until he stood before Pilate to begin his work of salvation. Jesus made it clear at the Jordan that not only is his death for us, but his life as well.

So We Could Be Free

It must be noted that all four Gospels agree that immediately upon his baptism, the Holy Spirit descended upon Jesus … and something changed.  Before the Jordan, Jesus was almost indistinguishable from the other carpenters of his time. Nobody assumed there was anything remarkable about him. There was seemingly very little worth writing down about his life before the Jordan. The Gospel writers give almost no record of it. But, after the Jordan, his life was extraordinary.  It was inexplicable. His own family members were baffled by him. People who knew him said things like “isn’t this the carpenter’s son? Isn’t his mother’s name, Mary?” (Mark 3:21) Jesus, through it all, claimed, “I have come down from heaven not to do my will but to do the will of him who sent me.”(John 6:38)  It seems that, at the Jordan, the Holy Spirit began to lead Christ in a new way. Christ, having given up the divine prerogative, made himself reliant on the Spirit, and went forth to do the Father’s will.

Through this baptism of repentance Jesus inaugurates a new life of grace for humanity, and through his sacrifice on the Cross, he invites us into this new life. Just as Jesus’ public life and mission began in the waters of the Jordan, our lives begin through repentance and baptism as well. We should never forget that Jesus lived his life, not as some unattainable goal, but as a template of how we are called to live. Just as the Father, at Jesus’ baptism, affirms that Jesus is his “beloved Son, in whom he is well pleased” we too have been made sons and daughters of the Lord through our baptism. Just as the Spirit descended upon Jesus at his baptism, so too does the Spirit come to us at ours. Just as Christ lived his life in union with the Father, through the Spirit, we too are called to live in union with Christ, through the Holy Spirit. Jesus began the work of the Cross at the Jordan. He walked our human life, carried our sin, so that we can have a share in his life, and live—through him—lives that have been set free from the domination of sin.

This article was first published on the Ascension Blog on January 4, 2018.

Feast of the Baptism of the Lord