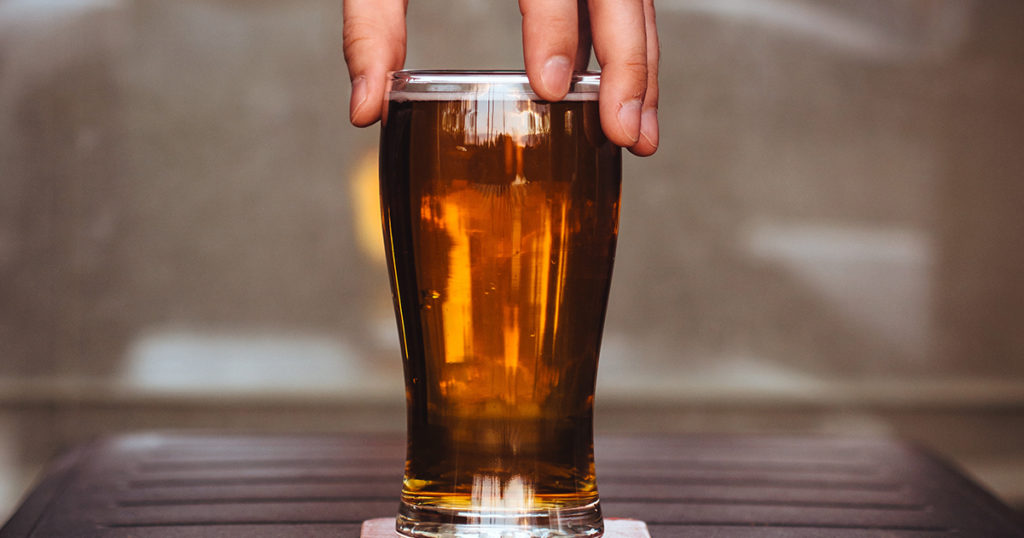 In talking with Catholic college students, I’ve come to find that underage drinking is a hot topic. Inevitably, students point to the fact that they can go to war and vote at eighteen. So why in the world can they not enjoy a beer?

First things first: Catholics have long considered drunkenness a mortal sin; St. Paul refers to it as a sin that excludes one from the kingdom of God (see Galatians 5:21). The reason is that in the act of drunkenness we are forfeiting two of God’s greatest gifts—our intellect and will. In drunkenness, we willingly defile our rational nature. It also lends itself to a host of other sins, notably sexual ones by weakening our inhibitions.

I would recommend using the legal limit as a benchmark for drunkenness. Frankly, a serious Catholic should never need a designated driver. This means that when one starts to “feel” it, it’s time to slow down or back off. I’ve heard serious Catholics nod their heads in agreement that drunkenness is a mortal sin. Then they go on to define drunkenness as setting in only when one blacks out. This is absurd. It’s a case of excusing one’s own drunkenness and yet somehow still pretending to maintain the letter of the law. To make things very concrete, drunkenness has set in when you cannot (or should not) drive a car.

First, a Catholic is obliged to obey the civil law. Outright disobedience to the civil law must be treated with the utmost seriousness. (Only if a law is clearly unjust—such as with Martin Luther King, Jr.’s disobedience of segregation laws—should a law be disobeyed). An inconvenient law (i.e., the drinking age) is not an unjust law. St. Paul is very serious here:

In many states, it’s legal for someone to drink underage in the presence of their parents—so that’s not an issue. The same is true if one travels overseas, where the drinking age in Europe is generally eighteen.

But the case is different with underage drinking: in the vast majority of places across the country, one certainly would not drink underage while standing next to a police officer. For this reason, in order for the analogy to hold, one would have to compare underage drinking to something like going twenty miles per hour over the speed limit. At any rate, speeding also does not have the aspect of scandal attached to it, as does underage drinking (see below).

A Culture of Lukewarmness

In my experience, underage drinking tends to go hand-in-hand with a culture of lukewarmness, a general lowering of zeal, and a subtle openness to other forms of sin. Where a culture of underage drinking prevails as the norm (and especially among otherwise serious Catholics), at a point having one or two social drinks turns into three or four (or five and six and beyond); and all of a sudden, those who were steadfast against drunkenness—but who insisted that underage drinking is OK—find themselves occasionally on the brink of drunkenness (and sometimes well past that point).

And occasionally, these same otherwise stand-up Catholics find themselves in compromising situations, often sexually—either individually after a night of drinking, or with someone else.

Over time and as such a culture becomes predominant—again, amidst otherwise serious Catholics—the general temperature of their zeal for holiness begins to go down; they often still go through the Catholic motions, but the vigor and vitality that comes from knowing Jesus personally—to the point where one gives him their entire life—subsides. Often, their lives begin to revolve around a party culture: “Which party should we go to?” Or, even on an ordinary day in the middle of the week: “What are we drinking tonight?”

It’s almost as if the house party culture—which might not be as bad as the average fraternity party at a state university—begins to dominate the lives of otherwise serious Catholic college students. And this is subtle and deceptive: while not being as “bad” as a typical fraternity house, these students slide into a lifestyle that they sometimes couldn’t have imagined years or months prior; but it becomes the norm, and their zeal for the spiritual life is sapped. In fact, I would wager that I have almost never (if ever) seen a student involved in underage drinking who is totally on fire for Jesus.

To ‘Evangelize’ Is a Lame Excuse

Sometimes evangelization is the reputed reason why some students want to engage in and permit (and even encourage) underage drinking. On its face, perhaps there is an air of plausibility here. But observing such a dynamic over several years, I can only conclude that rather than seriously evangelizing others, the purported evangelizers simply begin to lose their spiritual edge.

There are all kinds of neutral grounds where one can evangelize (e.g., sports, intramurals, meals, etc.). Jesus constantly reached out to sinners, but never in compromising situations. That is, Jesus was not with sinners when they were sinning (or even came close to it).

The Sin of Scandal

The other aspect that is typically almost entirely missing in this discussion is the charity we owe to our brothers and sisters and the recognition that our actions affect others. As I’ve said to some of my students—tongue and cheek, of course: “Look, if I drive by your house at 7 a.m. and I see your girlfriend’s car outside, I’m not going to assume that she slept on the couch.” And the same is true of the young freshman who looks up to these students—who inevitably says: “If that’s what good Catholics do, then it must be OK.”

Listen to Jesus’ words when it comes to leading others into sin, whether intentional or not:

“Temptations to sin are sure to come, but woe to him by whom they come! It would be better for him if a millstone were hung round his neck and he were cast into the sea, than that he should cause one of these little ones to sin” (Luke 17:1-2).

A “little one” here could refer to age or one’s spiritual state. For an upperclassmen to lead an underage underclassmen into sin—either by encouragement or example—fits Jesus’ words exactly.

The same teaching shows up in 1 Corinthians 8, where the issue is whether or not Christians can eat meat sacrificed to idols. Paul explains that it may be all right for those who know that the idols are not real. But for the sake of those weaker in faith, do not do it—because those weaker in faith may see their brethren eating food sacrificed to idols and it may unwittingly lead them into idolatry. The principle is clear: charity demands that we take into account how our actions affect others. St. Paul writes:

“For if anyone sees you, a man of knowledge [i.e., a mature Christian], at table in an idol’s temple, might he not be encouraged, if his conscience is weak, to eat food offered to idols? Thus, sinning against your brethren and wounding their conscience when it is weak, you sin against Christ” (1 Corinthians 8:10, 12).

In fact, St. Thomas Aquinas insists that the sin of scandal itself can be a mortal sin: “because [the person] has such contempt for his neighbor’s spiritual welfare that he declines … to forego doing what he wishes to do” (ST II-IIae, q. 43, a. 4). We are our brother’s keeper, and this is true spiritually as well.

With Whom Do We Have This Discussion?

Underage drinking is not the issue I start with in talking to your average college student; for many, the problems are much more severe (habitual unchastity, drunkenness, etc.). But it’s important to address this with our Catholic leaders because every year other new budding Catholic leaders (i.e., freshmen) watch their example—and then imitate it in the ensuing years. These Catholic leaders set the spiritual tone for campus. If they are dulled, then the overall spiritual ethos of campus goes way down.

As I said, underage drinking cultivates a culture of lukewarmness, a sapping of spiritual zeal—it’s a sort of gateway to the party culture described above. If Jesus is really Lord of my entire life, then the question is simply this: am I willing to be inconvenienced for the sake of the Gospel? To the extent that the answer is “no”—to the extent that I insist on underage drinking just because I want to—to that extent perhaps my own conversion has not yet fully taken hold.

In short, I have found that this is often the last step in a radical conversion—much like modesty for many women. In order to pass through this threshold, one has to move beyond simply asking: “At what point have I done something wrong?” in a minimalistic way, to asking: “Are these actions—these movies, these parties, etc.—taking me toward or away from my ultimate end?” And further, one asks this same question with respect to those who may be influenced by my actions—either by knowing me directly or by reputation: am I helping or hindering their pursuit of their ultimate end?

Going All in with Christ

It’s sort like of this: if you want to be a Jedi—if you want to go all in with Christ—this is what it takes: for at that point, there is no aspect of one’s life over which Christ is not king and Lord. There’s always something left for us to turn over to the Lord; and as I said, for many college students, underage drinking is the last thing to go.

Jesus said, “If your right hand causes you to sin, cut it off and throw it away” (Matthew 5:30). Here, he instructs us to radically avoid the near occasion of sin. A radical conversion—a person set on fire for Jesus Christ—does this with respect to his own life and with respect to his impact upon others.

What would happen if we went all in for Christ, in every single aspect of our lives? God is never outdone in generosity; when we go all in, he often blows us away with blessings we could never imagine.

What’s Missing from Most Responses to the Sex Abuse Crisis