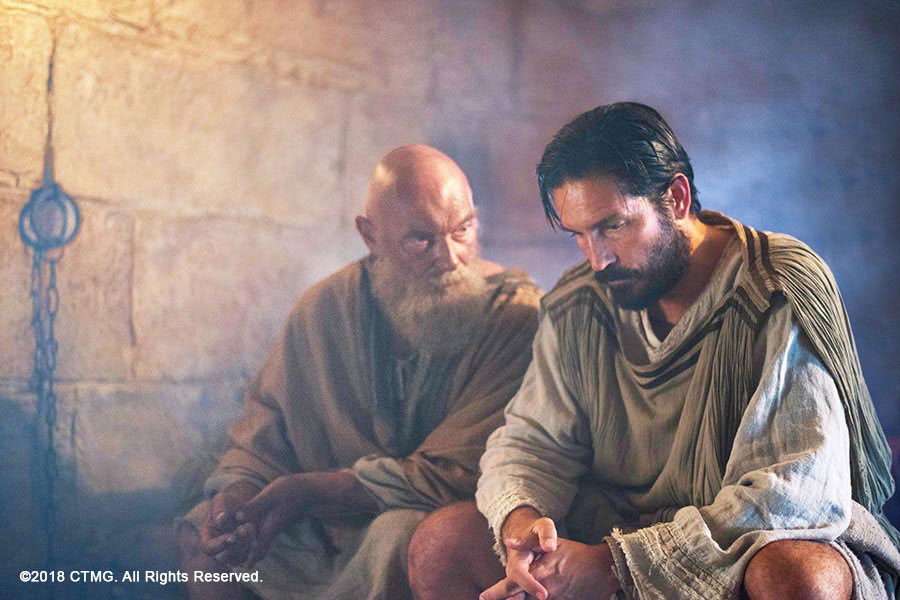 Jim Caviezel has returned to the Bible for another stellar performance as Luke, traveling companion and spiritual son of the great St. Paul. The writer and director, Andrew Hyatt, dedicated this movie to all who are persecuted for their faith, a point made explicit at the tail end of the movie. This theme of persecution is present throughout the movie, showing Christians burned alive by Nero—using them as street lamps, as described by the Roman historian Tacitus.

The movie centers around Paul’s final days around the year AD 67 while he was held in the Mamertine prison in Rome (which one can visit to this day). In the movie, the Christian community in Rome is led by Priscilla and Aquila, a couple Paul met in Corinth (Acts 18:1-4), who were originally from Rome.

A major theme throughout the movie is the dilemma facing the Christian community: should they flee Rome for safety, or stay despite the persecution?

Aquila urges the former, arguing that more good would be done in a safer environment, while Priscilla points to the terrible plight of widows and orphans who would surely suffer abuse and neglect if the Christian community were to leave.

At a point there is a plan for some Christians to escape Rome by way of tunnels found on the land of a few wealthy Roman families who seem to be sympathetic to the Christians. An orphan of about twelve named Tarquin who has been taken in by the Christian community offers to set out to contact these wealthy families and prepare for escape. He eventually returns beaten to death, as he is carried in by his cousin. The Christians are outraged and some seek violent retaliation, stating they will do to the Romans as they did to Tarquin—they will “murder them in their sleep.”

Aquila, while sympathetic to the idea of fleeing Rome, insists in a powerful speech:

“Some of you may flee the city and some may stay; but anyone who turns to violence can no longer be part of this community.”

Those Christians bent on violent retribution actually break into the Mamertine prison, murdering a Roman guard, as they seek to free Paul from prison. To their dismay, Paul refuses to leave, showing his disappointment in their returning evil for evil. Alluding to 1 Corinthians 13, Paul speaks of love—that only love can overcome hate.

This is perhaps the most powerful theme of the movie, as we watch the Christian community struggle to respond to Nero’s horrendous persecution, wrestling with their powerlessness, their inability to effect the change they desire. But it is Paul—in his teaching and example—who never turned to violence after all the suffering and persecution he endured: all the times he was scourged and stoned, he never once responded with hatred. Paul, in imitation of Christ, becomes the rock of example for this fledgling Christian community—because earthly life and earthly death are not the end:

as Paul himself says in the movie alluding to Philippians 1:21.

Paul Reflects upon His Earlier Life

A significant part of the movie is Luke visiting Paul in the Mamertime prison; Luke is seeking to write down Paul’s Gospel before he passes: the movie depicts Luke writing Acts of the Apostles from this prison.

Throughout these discussions, Paul refers to a time when he turned to vengeance: when he thought the Christians were blaspheming God and sought to put them to death. Movingly, he recounts the stoning of Stephen and the slaying of so many others, including women and children.

Paul often wakes at night, viscerally seeing images of the people he killed; as the movie depicts it, this tormented his conscience to the end. But after he is beheaded, we see Paul warmly embraced in heaven by all those whom he killed, including Stephen—a tremendously powerful scene.

While director Andrew Hyatt is Catholic, the film missed out on some important matters. Perhaps the most obvious is the conspicuous absence of Peter, who doesn’t appear at all in the film and is only mentioned once in passing by Paul who refers to “Peter’s snoring.”

This is particularly noteworthy because an episode in Peter’s life dovetails well with the film’s narrative: famously, the Christian community urged Peter to flee Rome because of the intensity of Nero’s persecution. As Peter was leaving the city, Our Lord appeared to him, and Peter famously said: “Quo Vadis?” (“Where are you going?”). Jesus responded by telling Peter he was going to Rome to be crucified all over again. Peter knew what it meant: Peter needed to stay in Rome and endure whatever suffering might come his way—offering his life for his flock in imitation of Jesus Christ.

Additionally, it is strange that Aquila and Priscilla are clearly depicted as the leaders of the community, albeit subordinate to Paul who is in prison. Where are the priests? Bishops? Traditionally, Peter was in the Mamertine prison with Paul, until they were both executed under Nero—Peter crucified upside down and Paul beheaded (because the latter was a Roman citizen). But again, Peter appears nowhere, nor do we hear anything about his successors, Linus, Cletus, or Clement—the next three bishops of Rome (that is, the next three popes).

Lastly, the Christian community is portrayed admirably in terms of their outreach to the poor and outcasts of Rome, and their moral courage and strength in the midst of suffering is eminently remarkable. But nowhere do they celebrate the Eucharist. Is the implication that the Sacred Liturgy was not a significant part of Christian life back then? There is a scene with Luke and Paul praying with some bread and a cup, but it is quick and one would be hard-pressed to defend this as anything like a eucharistic celebration as we know it. Whereas, in reality, the Eucharist was the center of the New Covenant from the very beginning.

On the whole, the movie is certainly worth seeing and depicts Paul’s final days with moving vividness. The dreadful suffering of the Christian community in Rome and their choosing the path of nonviolence is exquisitely beautiful. But it doesn’t deliver the full Catholic package that The Passion of the Christ did, and that’s OK: it’s a beautiful portrayal of the Church’s earliest days in Rome, particularly her violent suffering under Nero. But it’s a partial picture that leaves out many aspects of the full reality—notably Peter’s role and the absolute centrality of the Eucharist as the source and summit of our faith.

The Young Messiah, Creative and Faithful

A Guide to the Passion: 100 Questions About The Passion of The Christ

Swafford is Associate Professor of Theology at Benedictine College. He is author of Spiritual Survival in the Modern World: Insights from C.S. Lewis’ Screwtape Letters; John Paul II to Aristotle and Back Again: A Christian Philosophy of Life; and Nature and Grace: A New Approach to Thomistic Resourcement. He is also a contributor to The Great Adventure Catholic Bible. He is a member of the Academy of Catholic Theology and Society of Biblical Literature; and a senior fellow at the St. Paul Center for Biblical Theology. Andrew has appeared on EWTN’s Catholicism on Campus and is a regular contributor to Ascension’s blog as well as Chastity Project. He lives with his wife Sarah and their four children in Atchison, Kansas.

Ephesians: A Letter to the Children of God
Making Sense of Relics and Pilgrimages
Lent in the Early Church
Highlights from a Pilgrimage to Rome
Has Ascension's free media strengthened your faith?
You can now offer ongoing support for this content with a recurring gift.
Support Ascension