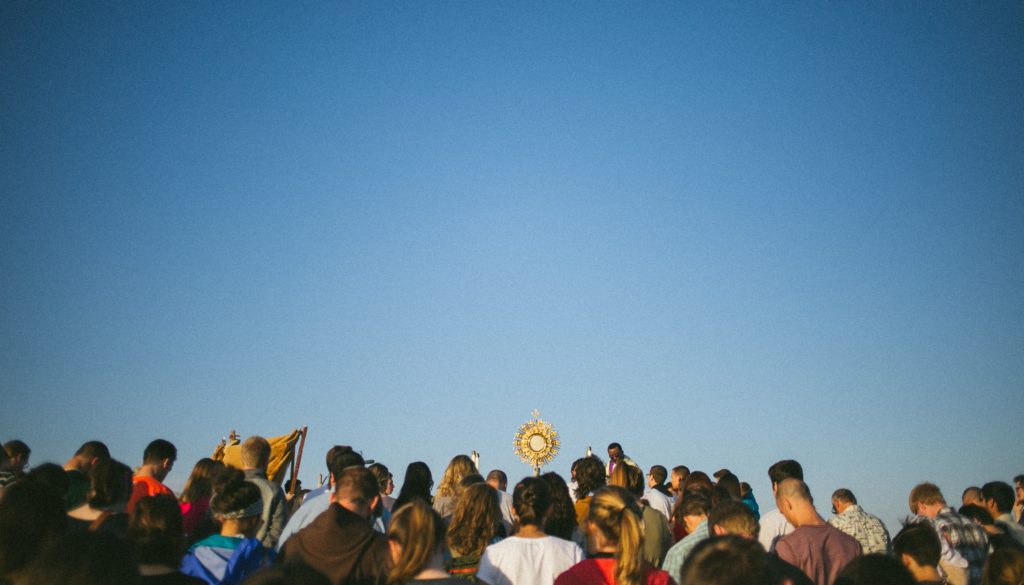 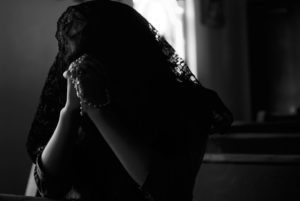 As a Catholic Christian, I feel torn whenever I hear about one specific controversy that seems to be erupting again and again not only over social media, but in other spheres of life as well. This controversy is in direct response to what appears to be a near regular occurrence in the news cycle of the global community. Tragedies keep happening with alarming frequency. From the murders of priests in Mexico and the Philippines, to Islamic terrorist attacks throughout the Middle East and Europe, to pedestrians getting mowed down by large vehicles in Canada, to school shootings across the United States.

And the typical human response to all these things? Sadness. Fear that this could happen elsewhere. A call to action. The controversy, though, is what this call to action should be. When each of the tragedies above occurred, many held a certain animosity towards Christians and other persons of faith who offered their “thoughts and prayers”. For instance, actor Wil Wheaton, who was replying to a tweet from Speaker of the House Paul Ryan, reminding people that prayers were needed in the wake of the November 2017 shooting in a Texas church, said this:

“The murdered victims were in a church. If prayers did anything, they’d still be alive … “

Apparently, prayers are immediately deemed ineffective in the face of tragedy. They are seen as a form of inaction on the part of the person offering their prayers. Wheaton later made an apology (which wasn’t really an apology, but a justification), with many people across social media agreeing with Wheaton’s view, some taking it even further. One person in my own newsfeed opined that “God is sick of your prayers.” 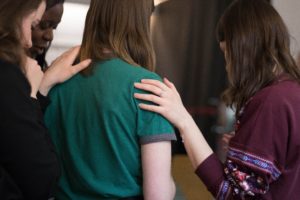 This is what the irreligious nature of a secular culture has brought us: a short leash of tolerance for people who believe in God. If someone dares to speak publicly about their faith, even in times of tragedy, that faith in God’s providence is mocked, derided, and ridiculed. Despite this, I will admit to agree with such people on one point: thoughts truly are pointless. Allow me to explain why, and also allow me to explain why prayers are not only effective, but are also a way for us to act in the face of tragedy and evil.

What Good Do Positive Vibes Do?

Again, I must admit, I do get irritated when I see someone say “Our thoughts are with Anne during this difficult time”, or, “Keep all those positive vibes and good thoughts coming Bob’s way as he deals with this heart surgery!” All I can do is shake my head because I realize that that is the best a secular culture can offer. Don’t get me wrong. It’s great to see that people care about their fellow man. However, comments like these reveal that good “thoughts” are all a person who doesn’t believe in the reality of a Creator can send forth. That’s not to even mention “positive vibes”, which never fails to make my eyes roll. My sadness or just anger will not spontaneously manifest and exit my body, thus finding its way to the person I’m supposed to be thinking about. “Positive vibes” are a bastardization of the concept of karma, which in itself is also something we shouldn’t put stock in.

So while there are a few elements in the offering of “thoughts” that can be commended, what truly saddens me is that people want to eschew prayer to a loving Creator and instead turn inwards. Think about it. When all we offer are our thoughts, or simply say to someone facing tragedy “I’ll be thinking of you”, we end up sounding very self-absorbed. Perhaps the person you are speaking to will appreciate you are at least thinking of him, but then we have to ask ourselves, “What good will that really do?” We either must act to make the pain go away physically or we must look for a different solution, a spiritual or metaphysical solution. That solution would be prayer. 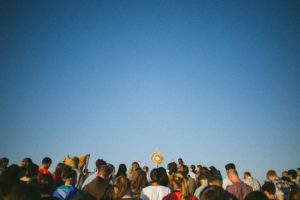 Even if critics do not believe in God, they must realize that there is a fundamental difference between prayers and thoughts. Again, thoughts turn us inward, and if that’s all we’re doing, then we should be chastised. Our thoughts turn us into gods. It’s as if we think these “positive vibes” that are percolating in our heads can have some effect on suffering people. But if we go outside ourselves, if we lift up our hearts to our Lord instead of keeping everything closed in, then we can be truly effective. That’s what prayer is all about: asking for something. We may not always receive what we ask for, but it is more efficacious to pray than it is to wear a Live Strong bracelet or think “positive thoughts” about someone.

Acting Instead of Praying

Also, many of these same critics qualify their irritation with “thoughts and prayers” by saying that politicians (and oftentimes, they’ll also extend this to people in general) should be acting instead of praying. How can we respond to this? I think the first thing we could say in reply, is to ask why the two have to be mutually exclusive. Why can we not both pray and fight to make the change that we want to see, if it is within our capabilities? We can pray for guidance in how to act. We can pray for the repose of the soul of the dead in situations like Parkland and Las Vegas. We can pray for the victims in hospitals fighting for their lives. We can pray for the families and friends that will be impacted because of such a tragedy. And then, in addition, we can act to do something.

When we do this, we aren’t turning inwards. If I am firmly convinced that there is a God, and if I am firmly convinced that God plays a role in our lives, then how could I not ask for assistance? I trust in something, or really someone, greater than myself. Now if I can’t admit to myself that there is a God, and can only offer my own mere thoughts, then my trust is placed solely in myself. But as a Christian, I have a filial trust in God. And as trust in anyone (human or divine) is difficult for us, we can turn to the Catechism of the Catholic Church to help us figure out how to obtain this trust:

“Filial trust is tested – it proves itself – in tribulation. The principal difficulty concerns the prayer of petition, for oneself or for others in intercession. Some even stop praying because they think their petition is not heard. Here two questions should be asked: Why do we think our petition has not been heard? How is our prayer heard, how is it ‘efficacious’?

Why do we complain of not being heard?

In the first place, we ought to be astonished by this fact: when we praise God or give him thanks for his benefits in general, we are not particularly concerned whether or not our prayer is acceptable to him. On the other hand, we demand to see the results of our petitions… Our filial trust is enkindled by [God’s] supreme act: the Passion and Resurrection of his Son. Christian prayer is cooperation with his providence, his plan of love for men (CCC 2734-2735, 2738).”

It’s so very human of us to demand instant results; to think that because we asked for something we automatically must receive it. It doesn’t take into account that we believe in an omniscient God. That is, a God who sees the whole picture, while we as humans only see part of the picture. But over time, many Christians realize that petitions of prayer to God must conform to his will, not ours. We come to trust in God more completely. Unfortunately, for those that have lost that faith, or for those that never possessed it, this trust the Christian has seems silly. They feel this way for at least two reasons. The first, because they see no reason to trust in a God that they cannot see. The second is the erroneous belief that if one takes time to pray, then there is no time to take action.

To this second reason we would again ask, “why not both”? Indeed, St. John Chrysostom points out:

“It is possible to offer fervent prayer even while walking in public or strolling alone, or seated in your shop,… while buying or selling,… or even while cooking” (cf. CCC 2743).

“He ‘prays without ceasing’ who unites prayer to works and good works to prayer” (cf. CCC 2745).

It’s clear that we can still work at helping others while we pray. Christians have been doing this since apostolic times. Today we often call such prayers “exclamatory prayers” Such prayers can be verbal or mental. Some examples would be the “Jesus Prayer” (Lord Jesus Christ, Son of God, have mercy on us sinners), or “Jesus, I Trust in You”, or even simply just the word “Jesus”. Unfortunately, Jesus’ name is used by many in our modern culture as an expletive. So many people don’t realize that it can be (and should be!) used as an exclamatory prayer in any situation.

“The invocation of the holy name of Jesus is the simplest way of praying always. When the holy name is repeated often by a humbly attentive heart, the prayer is not lost by heaping up empty phrases, but holds fast to the word and brings forth fruit with patience” (CCC 2668).

Here’s an example of how a Christian might act by prayer and act in a way acceptable to those who are not believers.

A man is out with his family at a sports bar. He is both a Christian and an EMT. The restaurant is filled up for an important playoff game. Two tables over, a woman begins choking on her food, and is clearly in distress. The man acts in two ways. First, he acts by saying to himself “Jesus, have mercy!” He acts again by jumping from the table to assist the choking woman. As he attempts to save the person choking, he continues to say to himself, “Jesus, help me!” The food soon becomes dislodged. The man acted by praying, and he acted by doing a good action. “This prayer [the invocation of Jesus’ name] is possible ‘at all times’ because it is not one occupation among others but the only occupation: that of loving God, which animates and transfigures every action in Christ Jesus.”

Far from being a hindrance to action, prayer animates the actions we perform. Surely, lifesaving actions can happen apart from prayer, but this quickly aging canard that we need “action not prayers” presents a false dichotomy. We can have both, and we must have both. This applies just as much on wider, societal levels, such as in trying to effect the change of unjust laws.

Prayers do “do something”. If secularists understood what people of faith, particularly Christians, perceive God to be, then they would understand that these people of prayer are oftentimes doing the best they can. To not ask for divine assistance means we rely on ourselves. And if we rely on ourselves, we’ll find ourselves in a world of hurt. We must continue to pray whenever tragedies happen, and we must act in the most efficient and effective way that we can in the present moment. We may find, though, that sometimes the only way we really can act is through prayer.