Back to Podcasts
How to Listen: Subscribe (it’s free!) in your favorite podcast app.

Fr. Josh answers questions about the difference between sacramentals and being superstitious, whether or not Catholics should practice circumcision on their children, and if earthly suffering can shorten our time in purgatory before we go to heaven. If you have a question, comment, or response for Fr. Josh, email us at askfrjosh@ascensionpress.com. You may hear your question or comment in an upcoming podcast episode!

Snippet from the Show

All suffering united to the cross purifies our souls. We can live out some of our purgatory on earth to the degree that we allow our suffering to unite us to the cross of Jesus Christ.

Part 1: The Adventures of Fr. Josh and Fr. Rueben

They have some crazy and funny experiences that Fr. Josh will share on the next two episodes!

How are we supposed to view sacramentals, such as the Miraculous Medal & Scapular? We aren’t supposed to believe that power actually comes from the thing, right? Would that not be idolatrous? Is it supposed to be like the statues which lift our minds & hearts to heaven? If so, then why do people stress the importance of wearing Miraculous Medal and Scapulars for protection? Do these items actually protect us in some way?

I have lately been thinking about circumcision as part of the Catholic canon. It has been raised as a question a few times if I have had my genitals mutilated and after enough times of posing this question to myself I looked it up as part of our faith. It seems that as the majority of the world is uncircumcised and the practice doesn’t create many lasting benefits and is more of a aesthetic surgical procedure here in the U.S. I have run across a few papers suggesting that circumcision is against moral law and that the apostle Paul strongly urged against it.

How do you see this practice in our faith and how does it play into the dialogue that we are created in God’s image if that doesn’t include our natural body. Not to mention that the foreskin appears to be functional tissue that is removed without consent of the person. Thanks for your podcast, it is always awesome to tune in and hear a researched opinion. Keep doing what you are doing!

I was just wondering if a deceased person had a painful death or a difficult life, does that shorten their time in Purgatory? 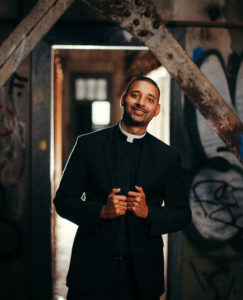 While Fr. Josh was raised Catholic, he didn’t like the Church growing up. One day, in adoration, he fell in love with Jesus and received the call to become a priest. Now, Fr.Josh is the pastor for Our Lady of the Holy Rosary Catholic Church in Louisiana, and he is a presenter in two of Ascension’s programs: Altaration, and YOU: Life, Love, and the Theology of the Body.