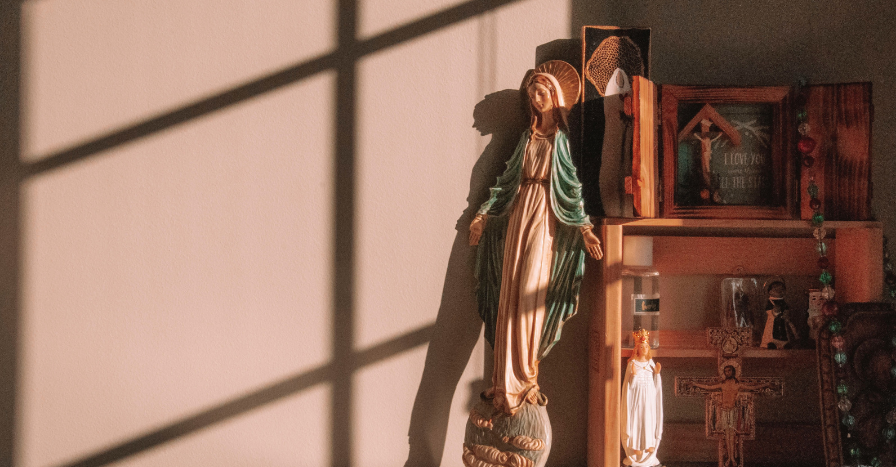 Many of us may have heard of Saint Gianna Molla, wife, mother and physician who, after being diagnosed with a fibroid tumor in her uterus, put the life of her unborn child first.She refused a hysterectomy and further treatments that would have put the life of her baby in danger. As a result, she died a week after giving birth to her baby girl, Gianna Emanuela Molla.

I was in the kitchen preparing yet another meal when I heard Gianna Emanuela speaking on Catholic radio in 2016. Her voice and her words, in fluent English with an Italian accent talking about ‘her mamma in Paradise’, struck a chord in my heart. It was the first time I had heard the story of this Saint, a mother just like me, and I immediately fell in love with both the mother and the daughter.

From that moment, a desire to establish a personal relationship with this “new” saint became very strong.

As I read about the saint and exchanged some lovely conversations, both face to face and via email, with Gianna Emanuela, the daughter,  I discovered many beautiful things as this friendship grew, especially the wonderful presence of Our Lady throughout her life. St. Gianna truly drew strength from Our Heavenly Mother and relied on her with incredible trust.

Ever since she could remember, St. Gianna’s family would gather around every evening to pray the Rosary. Her father would stand by a painting or a little statuette of Our Lady while the children would kneel. It was a moment of great joy for the family, “Il momento più’ bello della serata”,”The most beautiful moment of the evening” as one of St. Gianna’s brothers described it.

The tradition of praying the Rosary never ceased and the love for Our Lady grew stronger and stronger with Gianna. She always carried a rosary with her, whether in her school bag, purse, or pocket, and would always find the time to pray it. Even when at University and studying hard to finish her degree or at the end of a long busy day, there was always time for the Rosary.

“Pray the Rosary,” she would say to the girls of the youth group she used to run, “because without the help of Mary we won’t get to Heaven”. “Smile at her,” she would tell them, “Imitate her with your life, so that whoever looks at us may be elevated to holy thoughts.” She knew Mary was the key to her faith. Gianna knew Our Lady was the one who would bring her to Christ.

Following Mary into Her Vocation

“Our happiness both earthly and eternal depends on fully entering our vocation,” she would always say. For her, it was vital to know what God wanted from her and to joyfully serve him just like Mary did, whether that would have been as a missionary or as a wife and a mother.

It was to Our Lady of Lourdes that she prayed, asking Mary to help her find a holy husband with whom she could carry on serving Our Lord.

On December 8th, on the Solemnity of the Immaculate Conception, Gianna met Pietro. Without her knowing, Pietro had also asked Our Lady to find a holy wife with whom to build a Christian family.

It was then obvious that their Heavenly Mother had answered their prayers. Gianna fully entered her vocation, her happiness was tangible, and she was a radiant light for those around her.

Gianna married Pietro on September 24th, 1955, in a beautiful ceremony. White carnations were the flowers she chose. The church was filled with them.

There is a Christian tradition that says that carnations appeared on the earth when Christ was crucified, as Our Lady’s tears dropped on the ground. For this reason, they signify the pure and immortal love of a mother, a very appropriate choice that seemed to proclaim already what was to come.

After the wedding, instead of the usual custom, she offered her wedding bouquet to Our Lady. This was a very visible sign of her love, devotion, and trust to our Heavenly Mother and a wonderful gesture with which to begin one’s marriage.

Gianna had a special devotion to Our Lady of Mount Carmel and loved going to visit her at her various shrines. Those journeys were accompanied with a little sacrifice and fasting. It made her feel closer to Our Lady. It was only natural, therefore, that Pietro and Gianna would pay a visit to Our Lady of Pompeii as part of their honeymoon. Family pilgrimages carried on, being very important to the growing family.

The loving gaze of Mary never ceased to accompany the little family. As each new child was born into the world and born again in the waters of Baptism, he or she would be consecrated and placed under Our Lady of Good Counsel’s special protection, as per Gianna’s desire.

Relying on Mary In Every Circumstance

“To love Our Lady is to trust her in the very moments of trials, in our difficulties, She is our mother, she will not ignore our requests” Gianna would say. In her little notebook treasured by her family, she would write prayers to Our Lady that were full of trust, of faith, and of Love. In her written words, the certainty that Mary was present was tangible. She knew there was nothing she could not ask for, whether that was for the healing of a dislocated hip for one of her children, the healing of a stiff neck, her husband’s safe return from a work trip, the safe delivery of her children, or to be embraced at her final hour.

The time of Gianna’s trial arrived when pregnant with her last child.She was diagnosed with a fibroid tumor in her uterus, and her health deteriorated as she approached the end of her pregnancy. Gianna never ceased to believe in the power of prayer, even just ONE Hail Mary. She prayed and prayed through Our Lady’s intercession to spare her life and her baby’s life. She never stopped praying, trusting, and imploring the help of Mary.

Leaving Behind a Legacy of Marian Devotion

She didn’t want to die: “If you knew how much suffering it brings, having to leave behind small children,” she said to her sister on her deathbed. She was suffering a lot and the unbearable pain made her invoke heaven, Jesus, her mother, and Mary constantly, “Gesu, mamma mia, Maria!” And as the due date drew nearer and her strength was dimming, she demanded that the baby’s life would be chosen over hers.

She called upon Our Lady till the end. ‘Mater mea, fiducia mea!’ was her prayer.

Gianna’s prayers were answered, she was filled with the grace of Our Lord and was able to abandon herself completely without holding anything back to the will of God, just like Mary did. She was indeed saved!

She died in her spousal bed, as per her request, on the Saturday of the Octave of Easter in 1962, truly welcomed by the angels and the saints and in Mary’s arms straight to the Father. She had fulfilled what Christ said: “Greater love has no man than this, that a man lay down his life for his friends” (John 15:13-15).

Our Lady was visibly present throughout her life, and the two clearly had an intimate relationship. Gianna drew strength from Our Lady, and Our Lady accompanied her to death.

Gianna Emanuela lives to tell the story of her saintly mother. When she speaks about her, it feels as if St. Gianna herself is present and a link between heaven and earth is established.

It’s a story of a woman like me and you, who loved life, enjoyed going out, going to the theatre, and enjoyed the company of other people.  She didn’t want to die. She wasn’t a superhuman with no feelings. She felt the pain, the incredible sadness of leaving behind her little family. This is the story of a woman who today lives because she loved without holding anything back. Her life was in tune with the will of God, and when the time came she was able to respond in harmony. Every time I read about her, I see her humanity and the possibility for us to live our vocation fully, joyfully, if we let God work in us. Mary will lead us to holiness if we let her.

I do wish, and I hope you as well, that one day I will be received in heaven like St. Gianna, held tight in the arms of Mary just like she wished: “nell’istante della morte mia serrami tra le braccia o Madre mia”, “At the hour of my death hold me tight, my Dear Mother!

I dedicate and entrust this year’s Catholic Mothers Planner to St. Gianna Molla, that we too who are mothers, like her, may be able to truly and fully enter our vocation and entrust ourselves to Mary, this year and always, so to enjoy happiness here on Earth and hope for the eternal reward in heaven.

Plan your days with the focus on God!

12 Tips from the Saints to Remember When Planning

All About Mary: Hail Mary Prayer, Ark of the Covenant, and Mary’s Virginity [Audio]

Consecration to Jesus through Mary [Jackie and Bobby Video]

Chiara Finaldi is a wife, mother of seven, and blogger from London, England. She grew up on the Mediterranean island of Sicily in Italy and moved to England after marrying in1999.

She enjoys ‘wasting’ time with her husband and their 7 children and delights in the gift of an enormous extended family where music and good food is never lacking.