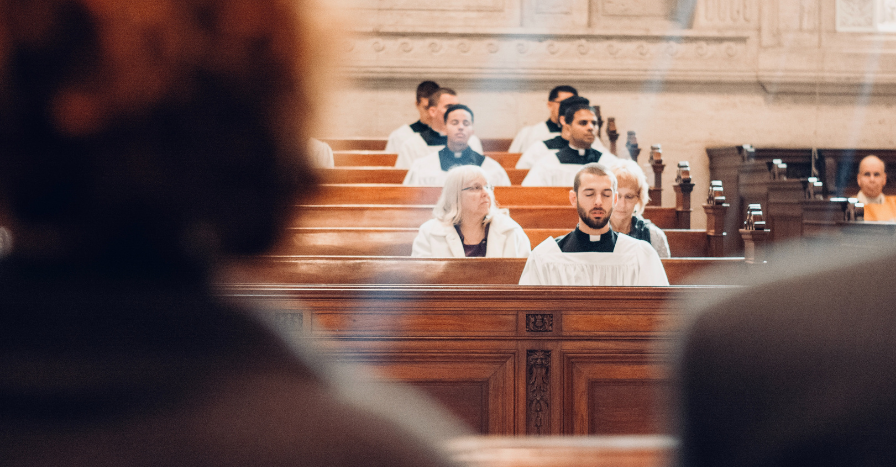 On the topic of vocational discernment, I heard a priest once quip, “Everyone’s discerning, but no one’s deciding.” As a former seminarian who is now married, I know what he means.

A lot of ink has been spilled over discernment—what it is exactly, how to discern, etc. There area lot of “cooks” in the discernment “kitchen.” At the risk of adding to the mix, I thought it might be helpful to speak of my own experience, discerning first to enter seminary and then to leave. My goal is to offer clarity to anyone struggling with his vocation. I know how hard it is. Hang in there.

I started thinking about being a priest during my junior and senior years of high school. I was baptized, but I really did not grow up as a practicing Catholic. I attended religious education classes and received the sacrament of Confirmation, but my family did not attend Mass regularly or pray together.

I attended a coeducational Catholic high school that had a vibrant Catholic ethos. We prayed at the start of every class. I took theology classes for the first time. There were prayer services before lunch, optional overnight retreats, field trips to diocesan youth events, and more. It was the prompting of a friend that got me to attend a prayer service. That became a daily thing, and, before long, I was attending retreats and holy hours.

It was on those school-sponsored retreats that I encountered young, faithful, and zealous priests. They were Christ-centered men, focused on the Eucharist. They were disciplined but not rigid. They had a clear vision of life grounded in the belief that what—rather, who—they were following was the truth. It was due to their witness that I began to think of the seminary.

After my first semester of college, I spoke with my diocesan vocation director and told him I was ready to apply to seminary. I finally felt at peace, so I applied and was accepted.

A lot of things happened all at once: I moved into the seminary residence and enrolled at the nearby Catholic university; a priest friend bought me a cassock, surplice, and Roman collar; and I became a philosophy major.

I would go on to spend three years in formation. They were good years, for the most part. I made lasting friendships. I grew closer to Christ and his Church. Thanks to some amazing professors, I grew to love philosophy.

As time went on and I soon faced applying to the major seminary, I became less and less sure about being a priest. Was this really what God wanted me to do? For some reason, I had this image in my head of being fifty and unhappy. The thought of wearing a Roman collar did not appeal to me. I used to get excited at the thought of preaching, but that wasn’t the case anymore.

I spoke with my spiritual director. Because this was a consistent and growing feeling, he said I should leave. It wasn’t just nerves or cold feet, but a consistent feeling of not wanting to be a priest that led me to discern out of seminary. It was actually around then that I took a pilgrimage to the shrine of Our Lady of Guadalupe in Mexico. I went with the intention of figuring out whether I should stay or go. After that trip, I was at peace—I would leave the seminary.

My spiritual director guided me through my departure. With wisdom and foresight, he told me what awaited. He said I would try to maintain a schedule of prayer as I had in seminary—morning prayer, daily Mass, and evening prayer. Outside of the structure of the seminary, he said, that schedule can be difficult to maintain. I should go to Mass during the week as often as I could, knowing that a job or life might get in the way. “Obviously you go to Sunday Mass; after that, pray as you can, not as you should.” A fellow seminarian, now a priest, told me to pray every day in the morning and at night for ten or fifteen minutes at least.

It was sound advice. I would say it took me around six months, maybe more, to mentally transition from seminary life. I thought maybe that I would go back to seminary, but the longer I was out, the more I felt and thought that God was not calling me to be a priest.

After a year, I finally went on a date. Nothing came of it, but it felt good. A few months later, I went on another date—and I eventually got married to that woman. So marriage is clearly what God intended for me. I’m very happy and at peace.

There are a few things we need to understand about discernment.

First, it is hard. After all, you are to figure out what God intends for your life in the midst of a secularized culture, where Christian mores are no longer prevalent. There’s the dual-pronged difficulty of living out Christianity, then considering whether God’s calling you to be a priest. The result is often a lot of confusion and feelings of isolation.

Second, a lot of people, religious or not, love to give passing, unsolicited life advice. Do this. Read that. Watch this if you want to make a million dollars. I heard this quote and it just sums up everything for me. This can be confusing.

The Problem with Discernment

The main problem with “discernment” is that the term itself is vague. What exactly does it mean? If you briefly consider the priesthood, are you “a discerner”? Some men attend a vocation retreat with varying degrees of interest. One may be very close to applying for seminary, while another is just beginning to consider it. So discernment can mean different things to different people.

From my own experience and talking with other former seminarians, it is evident that discernment can be merely an intellectual problem to be solved: “If I think long and hard enough, then I will figure it out.” This can be both misleading and tiring because the answer is sometimes beyond our own thought processes. We are trying to discover God’s will for us.

Discernment struggles can take a toll on your mental, emotional, spiritual, and even physical health. I remember not being able to sleep some nights because I was thinking and stressing over whether I should stay or leave the seminary.

In addition to your own discernment, the Church is discerning you as well. Not every man who wants to be a priest or thinks he is called to be a priest has a true vocation. The Church must call him as well.

It is important to ask Jesus, in prayer, why you are attracted to the priesthood. Ask him if he wants you to apply to seminary. Be honest with the Lord about how you feel. If you feel torn about your decision, tell him that.

Do not go at it alone. I tried that. I would sit in a chapel, trying to pray, but staying in my own head. While I believe grace was at work, I was not letting God in as much as I should have. You know that image of Jesus knocking on the door without a knob on the outside? It was like I was on the other side, sitting very close to the door. I heard him faintly. I knew he was there. But I did not always let him into that place and conversation.

You may feel called but honestly not want to be a priest. If that is the case, consider prayerfully and seek the counsel of a wise priest before you apply to the seminary. If you find the priesthood attractive and are thinking you might be called to it, contact the vocation director of your diocese. See what he says. If serving Christ in a sacramental manner appeals to you, that is a sign you should be a priest.

If you are attracted to the Church and the sacraments but do not necessarily feel called to be a priest, chances are you called to marriage. Do not see married life as not “settling” for something less; it is not “Plan B.” God calls most men to be holy husbands and fathers. There is a good chance you are one of them.

Do not be afraid. Even if you feel like Peter, afraid and drowning in the water, Jesus will save you (see Matthew 14:22-33). Keep walking towards him.

God loves you. He is with you. He has your back no matter what. Pray about that. Meditate on that. The discernment will figure itself out.

Moving through the Clouds of Discernment

All About Discernment: Dating, Marriage, and Jackie and Bobby Angel [Audio]

Dan McQuillan is originally from Long Island, New York. He currently resides in Rhode Island where he teaches and writes.