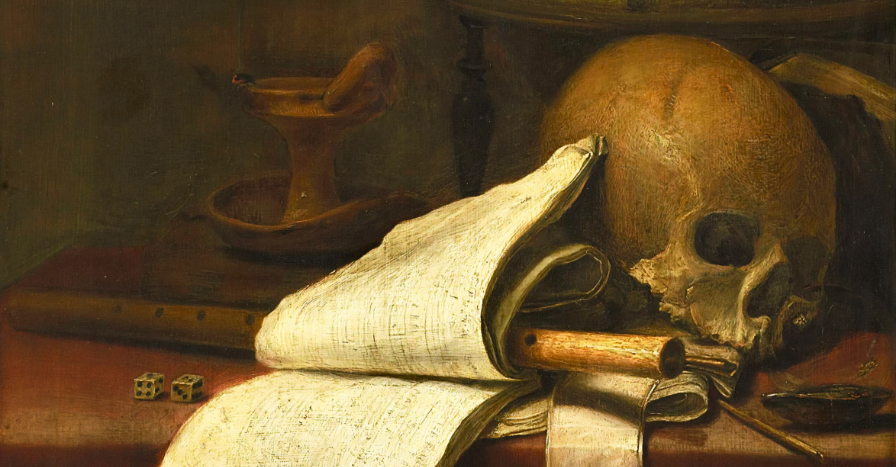 The Catholic liturgical year has a rhythm that keeps our lives tied to the seasons, and those seasons tied to the eternal. As the leaves fall, the weather turns colder, and the day shortens, we naturally think of the shortness of our own “day” on this earth. The Church feasts that come around this time of year -All Saints Day, All Souls Day, and the resulting popular secular celebration of Halloween (the eve of these feasts, or All Hallows Eve)- help us reflect on those realities. They also bring out one of my favorite Christian symbols and one that is perhaps currently least understood: the skull.

As a preface, please let me state that I mean to discuss here the skull as a Christian symbol. If ever the skull is used to symbolize things of the occult, I obviously object to such uses! However, they are not my topic. Just because the skull has perhaps lost its Faith-affirming connotations in our day does not mean that the symbol shouldn’t be fully embraced and re-claimed for the incredible consolation it can be to the Christian heart. In this post, I’d like to explain why.

My affinity for the skull goes back to some of my earliest memories. In northern New Mexico, processions of faithful penitents would often be followed by “Dona Sebastiana“- a local and somewhat humorously affectionate name for death. Dona Sebastiana was a life-sized hand-carved figure of a skeleton riding in a cart pulled by the last person in the procession. Armed with a bow and arrow, she reminded all present that death follows us closely and takes aim at us, wherever we go.

Why would this thought be so worth keeping in mind that it bore dragging around a physical representation? Because it profoundly affects the way we live. Interestingly, and in stark contrast to this memory, one could say that one of the most defining features of our modern society is that we have worked very hard to push away the thought and reality of death, along with any representation of it.

We are as distant as any society can be from the necessity of hunting and from the farm, where we once witnessed and respectfully relied upon the death of animals for our own lives.  Sadly, now it seems we push the death of even our own family members out of our homes and therefore out of our experience as well!  As grandma becomes forgetful, she is too often forgotten and ends her days out of our sight.

We even try to forget about our own death and often make our lives a quest for a distraction from it. Then, when we’re forced to confront the fragility of our lives, with reminders like today’s ubiquitous Coronavirus face coverings, we don’t deal well. We tend to be either overly cautious to the point of self-protective impracticality, or in cavalier denial about the risk, thus endangering others.

The Church, on the other hand, has always taught us that awareness of the inevitable nearness of death is one of the most healthy practices for our souls and minds. She teaches that souls who regularly meditate on what are collectively termed the “four last things,” (death, judgment, heaven, and hell) are not apt to ever lose their salvation. Why?

Reflecting on the realities of our end encourages us to live and love like today could be our last. Giving death and the things of eternity real consideration results in a personal grasp of the fact that our time here, however long it may last, amounts to less than a “blip” in the face of forever.  Therefore, we come to own the realization that our choices now, in this tiny precious chance we have, result in one of two final and eternal consequences.

A while back, a country song by Tim McGraw became popular called “Live Like you Were Dying,” in which the protagonist was misdiagnosed with cancer. While he believed he had the disease, he expressed greater love for his wife, forgiveness of his enemies, and sheer joy in the company of his friends, more than he ever had. He also did things he never had the courage or motivation to try when life seemed indefinite. (If I recall correctly, he even found that his usual beer tasted better!)

He ends the song with the wish that everyone could be so blessed as to believe they were dying for a few days. Well, my friends, we do get that blessing! We are dying! Why not live like it? Why not be reminded of it or even celebrate it? In truth, our eternal fate depends upon keeping our numbered days at the forefront of our minds.

The Trick of Time

C.S. Lewis, in his Screwtape Letters, offers an amazing assessment of human psychological and spiritual vulnerabilities by telling an imaginative tale of two demons, a master and an apprentice, who want to take souls to hell. The master teaches his pupil that subtle tricks work much better on us than storm tactics. We need only to be convinced that there is nothing but time left to us; that we can turn away from God now and have plenty of time to repent later.

The devil would love nothing more than for us to live under the illusion of indefinite life, and that, of all things, is the illusion we try to create for ourselves today. It’s as if we are doing the devil’s work for him!

Why not instead take a good long look at a skull and remember how short, fragile, vulnerable, beautiful, and precious our life is, and how critical this moment is in our eternity? This was not a foreign thought at all to Catholics a few generations ago. Why has it become so now?

Take our representations of St. Francis as an example. If you were to surmise anything about him from the representations which are popular today, you would think he was the patron saint of zookeepers. Yes, Francis had a great love of God’s creation and a great affinity for animals. However, the Disney-style birds and squirrels that surround him today almost block from our view his astounding mysticism and wisdom. Traditionally, what was first most notable in his iconography was his stigmata, which is the sharing in the marks Christ received during his Passion (Galatians 6:17).  Secondly, it was the human skull near him or in his wounded hands.

St. Francis was indeed notable for his joy, but his joy was real because it was rooted in the truth, not in the avoidance of it. That’s better than Disney-fied happiness in my book. However, we can’t have St. Francis’ type of joy in this life without sureness in both its passing nature and the eternal realities to come.

Still, skulls, as they signify remembrance of death (memento mori), offer even more gifts to us. Besides Joy, another is courage. When I was deployed years back, a tattoo design was circulating among young men that became widely popular. It featured a grinning skull. Surrounding the skull was the phrase, “Death smiles at everyone. Marines smile back.” There was something important in what those tattoos expressed. They conveyed a confidence that came from the young men who, instead of isolating themselves from the realities of death, embraced it and with a certain swagger, and maybe even mocked it.

We as Christians have even more right to that courage, confidence, and swagger in relation to death than even my Marines did. They had it by virtue of their own personal sacrifice. We have it by virtue of the even greater and more secure sacrifice of Christ’s.

Doesn’t St. Paul himself actually mock death in celebrating Christ’s victory over it? He asks:

This is why I love to see not only skulls, but skulls that express joy, confidence, and courage in the acceptance of death, and surer faith in Christ’s promises. As Catholics, the skull is our symbol. First found in the Christian catacombs of Rome, and eventually throughout the continent in the 16th and 17th centuries, Europe once loved and venerated the beautifully decorated skulls of saints and martyrs. They weren’t considered morbid or frightening, and something to be hidden by the adorners. They were instead celebrated for their witness to the eternal salvation those saints achieved through their earthly death.

Such wonders of devotional art heal the mind and enrich the soul by encouraging contemplation of the eternal, or at least once did in days when our Faith was less delicate. Oh that we would return to such robustness in our Faith, that the face of death could cause us no fright, but only beg for an examination of our lives, firm resolution towards the good, and sureness in the eternal truths of Christ!

AnnaMaria Cardinalli sees beauty as a means for evangelization and has performed in the world’s great musical venues. These range from Lincoln Center, Kennedy Center, and Carnegie Hall, to the really important ones, like singing on EWTN or teaching Panis Angelicus to the first communicants she prepares with her mom, Giovanna, at their local parish. She is the author of Music and Meaning in the Mass. She bleeds blue and gold. Her Ph.D. in theology is from Notre Dame, and she’s a service-disabled Navy veteran.  Her work in Iraq and Afghanistan exposed human rights violations against children, and she remains dedicated to the protection of God’s littlest ones.