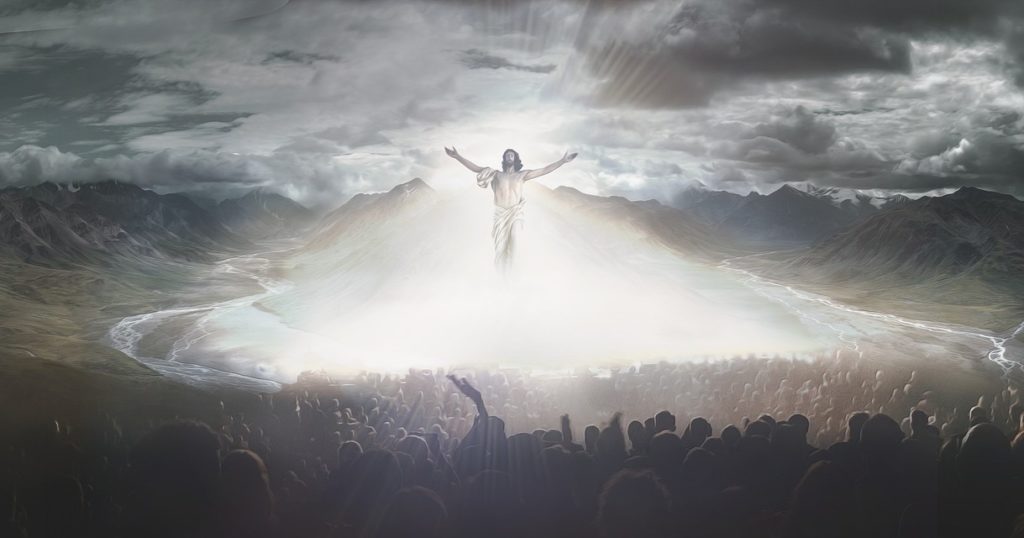 In Acts 1, we are told of these miraculous truths of Christ:

“After His suffering, He presented Himself to [his disciples] with many convincing proofs that He was alive. He appeared to them over a span of forty days and spoke about the kingdom of God.”

And after those forty days were complete, Jesus stood in the midst of his disciples.

“So when they had come together, they asked him, ‘Lord, will you at this time restore the kingdom to Israel?‘ He said to them, ‘It is not for you to know times or seasons which the Father has fixed by his own authority.  But you shall receive power when the Holy Spirit has come upon you; and you shall be my witnesses in Jerusalem and in all Judea and Samar′ia and to the end of the earth.’ And when he had said this, as they were looking on, he was lifted up, and a cloud took him out of their sight.

Like the disciples, we as human beings long to have all the answers. We want to know what is around the next corner and to be able to prepare for what lies ahead. Will we one day achieve our dream career? Will we one day find someone with whom we can share our lives? Will we remain safe and healthy? We want to be in control of our own destiny, and what greater answer could our heart’s desire than to know what is to come after this life? Instead, Jesus tells us in Acts that “it is not for us to know.”

As frustrating as this might be, he does not leave us empty-handed, but instead gives us the Holy Spirit to guide us in wisdom and knowledge of the truths he has revealed to us. Indeed, while we may not know “the times or seasons” of Christ’s coming, we do have his words to us in the Bible and the teachings of our Church to guide us in the key truths.

In the World, but Not of the World

I have often heard it said in Christian circles to live one’s life “in the world but not of the world.” The idea is that the physical reality of our living on earth is but a small piece of our eternal destiny of life in heaven. With that said, the above statement is also an acknowledgment that everything in this world is temporary: our physical homes and material goods, successes, and accomplishments, even our friends and family. This may seem like a somber perspective, but it is part of the greater encouragement to not let acquiring physical possessions, careers, or relationships outweigh our devotion and love for God and our faith. It is a hard balance. We live in this world, but we are called not to let this world “consume” us and draw us away from the ultimate life we were made for.

For a more specific biblical analogy, in Matthew 24:42-44, Jesus speaks about the end of time as coming like “a thief in the night” saying:

“Watch therefore, for you do not know on what day your Lord is coming. But know this, that if the householder had known in what part of the night the thief was coming, he would have watched and would not have let his house be broken into. Therefore you also must be ready; for the Son of man is coming at an hour you do not expect.”

“For you know very well that the day of the LORD will come like a thief in the night. While people are saying, ‘Peace and safety,’ destruction will come on them suddenly, as labor pains on a pregnant woman, and they will not escape. But you, brothers and sisters, are not in darkness so that this day should surprise you like a thief. You are all children of the light and children of the day. We do not belong to the night or to the darkness.”

Jesus is telling us to remember and seek him in our day-to-day lives so that we do not get so caught up in obligations and commitments to this life that the end times catch us by surprise and we suddenly realize that he is here and that we have neglected him. Of course, we are called to pursue dreams and goals and to form relationships in this world, but never at the expense of letting God fall through the cracks of our priorities. To keep God in our midst, we can consider what both the Bible and the Church teach regarding the end times so as to best live our lives fully while awaiting his return.

The Book of Revelation

The book of Revelation is the very last book of the Bible. The speaker is referred to as John who speaks of the end times and the Second Coming of Christ. According to the United States Conference of Catholic Bishops, the book of Revelation is apocalyptic-literature filled with symbolism, much of which cannot be taken as literal and instead, provides readers with spiritual themes of the truths of Christ’s authority and ultimate power over evil.

The main takeaway from Revelation is eschatological in nature, meaning that the text deals with topics of death, judgments, end times, and the human soul. Ultimately, Revelation makes clear that at the end of time, the Lord’s salvation and victory will come and put an end to the current struggles we face in our world today with the powers of sin and evil. With his return in glory, Jesus will overwhelmingly defeat Satan and all evil, bringing forth the everlasting kingdom of heaven.

I would encourage anyone interested in what the Bible has to say about end times and Christ’s coming to spend some time in Revelation, studying and reading up on the historical and biblical significance of the text in light of our faith as Catholic Christian believers.

The Resurrection of the Body

In turning now from the Bible to Church teaching, we see that the Church has always taught profound respect both for the human soul and the human body. It is a firm Catholic belief that at the end of time, our bodies and souls will be reunited once more.

The Catechism of the Catholic Church addresses this point in article 997:

“In death with the separation of the soul from the body, the human body decays and the soul goes to meet God while awaiting its reunion with its glorified body. God, in his almighty power, will definitively grant incorruptible life to our bodies by reuniting them with our souls through the power of Jesus’ resurrection.”

While the specifics of this rejoining of body and soul at the end times are left up to faith, the reality of this rejoining is affirmed. In light of this belief, when dealing with Christian burial, while cremation is accepted, any separation of ashes via scattering over a field or river, dividing the ashes up between family members and keeping them on a living room mantle, or incorporating ashes within jewelry is not supported by the Church. The reason for this teaching is to keep the reverence for the body with the belief that our souls will be reunited again with our physical bodies and so we do not want to divide up what is meant to one day be rejoined. Though we should not despair for those persons whose remains have been separated in some way, for we also believe that Christ’s capabilities are beyond our understanding.

The Particular and General Judgments

In addition to the Church’s teaching on the resurrection of the body, there are teachings on two types of judgments. The first is referred to as the “particular judgment” which occurs for each person at the moment of their death. In this judgment, the individual is granted either the joys of heaven, the purification of purgatory before heaven, or separation from God in hell. The Church affirms that this judgment happens immediately for all people upon their death.

In contrast, the last judgment or (general) judgment occurs at the end of time. The Catechism speaks of this judgment in paragraphs 1038-1041.

In these paragraphs, the Catechism states—in summary—that those in their tombs will hear the voice of God and come forth to the resurrection of life and those who have done evil to the resurrection of the damned. The nations will be gathered and separated and the truth of each person’s relationship with God will be revealed. Christ will come in glory and:

“Then through his Son Jesus Christ, God will pronounce the final word on all history. We shall know the ultimate meaning of the whole work of creation and of the entire economy of salvation and understand the marvelous ways which his Providence led everything towards its final end.”

And ultimately, the Catechism tells us:

“The Last Judgment will reveal that God’s justice triumphs over all the injustices committed by his creatures and that God’s love is stronger than death.”

This leads to the final point I would like to make on the end times, which is that we should look to Christ’s Second Coming with hope. The Church does not teach a “rapture” or a terrifying view of the end of the world, but instead an image of an end of days where Christ intends to “make all things new” (Revelation 21:5). While we may not know exactly what the Second Coming will look like, or how our current world will be reshaped or changed, we have the promises of Christ and his words at the great commission of Matthew 28:20 when Jesus tells his disciples:

“I am with you always, to the very end of the age.” That, I believe, is what we should hold onto as we live our earthly lives as well as we can in love with hope for the work that is being done in our lives now and for what is being prepared for us in the future.

Revelation: The Kingdom Yet to Come [Bible Study Program]

Living with Hope [Every Knee Shall Bow Podcast]

Is This the End of the World? Maybe.

Featured image by pixunfertig on pixabay