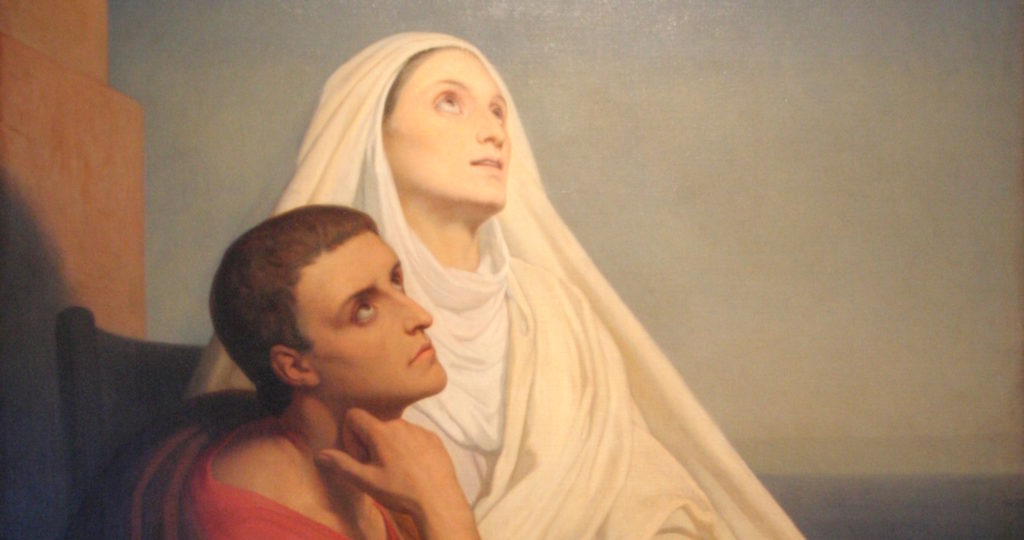 Many Catholic women look up to St. Monica because of the deep devotion she showed to God in her marriage and in raising her children. St. Monica is a guide to those who are struggling with marital problems, children who have fallen from the Faith, and victims of verbal abuse and unfaithfulness. She is also the patron saint of alcoholics and the city of Santa Monica, California, which was named after her. We celebrate St. Monica’s feast day on August 27.

Monica was born in Tagaste in northern Africa around 332. She was raised by Christian parents and a maidservant. Her maidservant would not let the children drink too much water in fear of them becoming fond of drinking wine. As a child, Monica would go to the cellar to pour her parents a glass of wine, and she would drink some herself—sometimes even a full cup! Her maidservant discovered what she was up to and reprehended her. Monica realized her faults and repented, which helped her turn to God and be baptized.

Although Monica was raised a Christian, her parents gave her away in marriage to a pagan, Patricius, an upstanding citizen of her hometown of Tagaste. Monica lived with her husband and mother-in-law throughout their marriage. Patricius had a violent temper and was licentious. Monica suffered from his infidelities but refused to complain. Although Patricius criticized Monica for living a life of charity and piety, he respected her. When other women in town complained about their husbands, Monica would never join in and would always stop them. Monica was finally able to influence her husband and mother-in-law to convert to Christianity and be baptized a year before Patricius passed away.

Find Hope and Healing in the Example of St. Monica

What Would Monica Do? uses the example of St. Monica to provide hope and healing for those with a loved one who has left the Faith through practical advice, insights from Scripture, and personal stories.

Patricius and Monica had three children who survived infancy. Her eldest was the famous St. Augustine and her other two children were named Navigius and Perpetua. Through the pious loving example of their mother, Navigius became a monk and Perpetua became a nun and later an abbess. Augustine on the other hand, was interested in rhetoric. Patricius was proud to have Augustine begin classical learning from an early age because he felt it would help Augustine make a successful career in the world.

Patricius’ interest in the Faith the year before he passed, however, helped spark Augustine to have an interest in Christ as well. Unfortunately, when Patricius passed away, Augustine was only seventeen years old and was strongly influenced by his peers. Augustine began following the Manichean heresy, which held all flesh to be evil and rejected the Bible in favor of a secret path to salvation. Augustine took on a mistress, with whom he had a child, but the two were unable to marry because she was of a lower social class.

Monica was disappointed in her son and cried more tears for him than for a deceased child. For a while, she did not allow him to eat or sleep in her house. Then one night she had a vision that her son would come back to the Faith. She then stayed closer to him, praying and fasting. Augustine did not like having his devout mother around, so he tried to get away. At the age of twenty-nine, Augustine decided he wanted to go to Rome to teach rhetoric. Monica was determined to go with him to Rome. One night, Augustine told his mother he was going to the docks to say goodbye to a friend, but instead he got on the boat himself and sailed to Rome. This trickery broke Monica’s heart, but she still followed after him.

While Augustine was in Rome, he became very ill—to the point that they were preparing to baptize him. Through the prayers and tears of his mother, Augustine had a miraculous recovery, but when he recovered, Augustine chose not to be baptized.

When Monica finally arrived in Rome, she found out that Augustine had traveled to Milan. Although the journey was rough, Monica followed after him. While in Milan, Augustine came under the direction of St. Ambrose, the Bishop of Milan. Around the same time, St. Ambrose became Monica’s spiritual director. Monica humbly accepted his advice to give up certain practices that had become second nature to her. During her time in Milan she became a devout leader of a women’s group, as she had done previously in her hometown of Tagaste.

Monica continued to pray for Augustine through his years of instruction with St. Ambrose. At Easter in the year 387, Augustine was baptized with his friends. Monica was so overjoyed at this and treated his newly-baptized friends like family. She even picked a wonderful Catholic girl for Augustine to marry. To Monica’s amazement, Augustine had his own intentions of giving his life to Christ through priesthood!

From Tears to Sanctity

St. Monica had spent her entire married and widowed life leading the unfaithful to Christ. Women today are encouraged by her devotion to God through her marital struggles, and relentless prayers and good tiding for her son Augustine, who had fallen away.

Shortly after Augustine announced his intentions to enter a life of celibacy, Monica had no reason to remain on this side of heaven; her work on earth was complete. She caught a fever in Ostia, Italy, and she asked for her body to be laid there. She passed away soon afterward, in the year 387. Her son Navigius wanted to lay her in their hometown of Tasgaste in northern Africa, but he honored his mother’s wishes to be buried in the city where she died, since she was only a traveler to heaven.

St. Monica died in the presence of her sons in Ostia. Her wayward son Augustine became a great saint, and also a priest, the founder of many monasteries, Bishop of Hippo, a great theologian, and one of the greatest Doctors of the Church. Augustine’s meditations on his spiritual journey are found in his Confessions, where we read that he wept bitterly for his mother because she wept so many tears for his salvation. St. Monica’s body was later transported to Rome, by Pope Martin V in 1430, where she is now venerated by the faithful.

So many mothers today feel the pain that St. Monica did in seeing their children leave the Faith. In her, they have powerful intercession and an example that in God’s providence, the long-suffering tears of a devout mother can lead her children back not only to the Church but even to high sanctity.

St. Monica, pray for us!

Find Hope and Healing in the Example of St. Monica

What Would Monica Do? uses the example of St. Monica to provide hope and healing for those with a loved one who has left the Faith through practical advice, insights from Scripture, and personal stories.

Does God Expect You to Be Perfect? [Dr. Andrew Swafford Video]

Broken & Blessed: An Invitation to My Generation [Book]

Katie F. Ruszala is a wife and a mother in western New York. She worked professionally as a youth minister, faith formation director, and a religion teacher. She enjoys doing ministry with her husband Michael. Katie has a bachelor of arts degree in theology from Ave Maria University in Florida, where she wrote her thesis on transubstantiation.