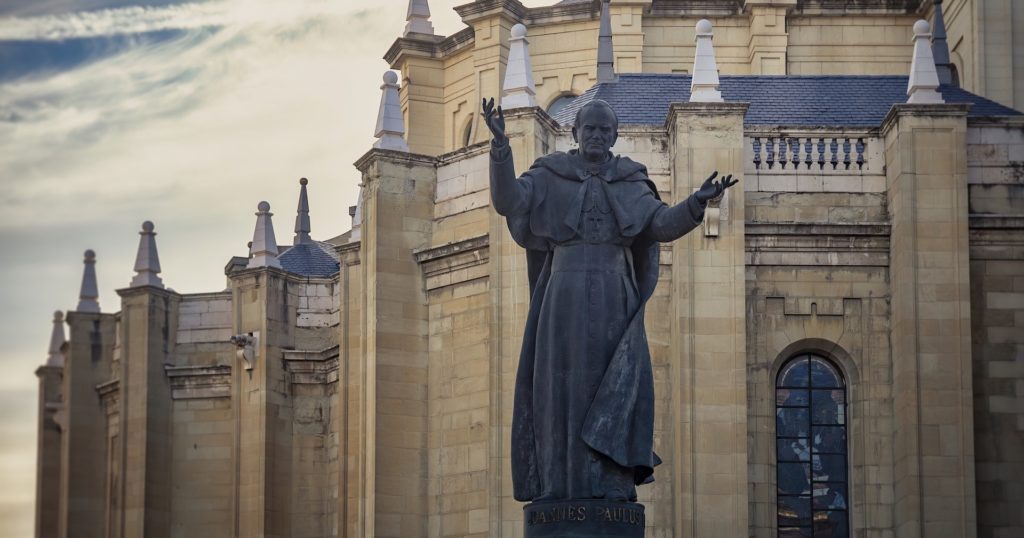 On May 18, we celebrated what would have been the one-hundredth birthday of Pope St. John Paul II. This milestone caused the world to rightfully recollect about the life, mission, and message of this hero of our time. One of his most iconic moments occurred forty-one years ago this past June.

In his first visit as pope to his homeland of Poland, the communist powers found themselves inside the web of Catch-22. John Paul desired to see his home country and pray with one of the most vibrant and unshakeable Catholic nations the world has ever seen. There is no doubt that the Polish authorities at that time didn’t want his visit to happen. However, if they forbid him from arriving they risked outraging the people as well as admitting that this faith leader actually had an impact on the real world. Faith was deemed irrelevant, ridiculous, and unnecessary. If they allowed him to come they knew that large groups of Catholics may come out to meet him which could spark an uprising from the people and leave Poland more susceptible to invasion from the Soviet Union.

Peggy Noonan’s masterful work entitled, John Paul the Great: Remembering a Spiritual Father, recounts this scene and the events that surrounded it. The Polish government was fearful that there could possibly be a showing of tens of thousands of Catholics upon the pope’s entrance into the country. The communists were partially correct, they should have feared a large crowd: over a million people packed the streets as John Paul offered Mass in Victory Square in the city of Warsaw.

The content of the pope’s homily was the redemptive role of suffering and the witness of the Polish people to the Faith of the risen Christ in the face of evil. Pope John Paul would later pen his encyclical, Salvifici Doloris, five years later which begins, “Declaring the power of salvific suffering.” The suffering of the Poles was a fact, and the pope was both recognizing it and asking them to accept the invitation to provide witness to the redeeming quality of sacrificial love. He asked the crowd if they were willing to accept the duties that come along with such a witness. Their response is noted by Noonan to sound like “thunder” as they began to chant, “We want God, we want God, we want God … ”

Christ and the Multitudes

While our countrymen cannot claim to be ruled by the oppressive powers of communism and forbidden to worship, there is a sense that the crowds that sit, stand, and kneel in socially-distanced Masses and outdoor liturgies across the United States are itching to chant the same cry of that crowd in 1979. COVID-19 separated us from public worship and the reception of the Sacrament that is the food of angels. As churches reopen across the nation, the eyes are the only portion of the face that one can view of others as we scan the separated congregations in our parishes. In the eyes, though, we can see the soul. The souls of these people are on fire with the same want, or rather, the same need for God.

That thunderous response by over a million people that June day in Poland echoes through the cities of our country as unrest continues. Everyday Americans attempt to continue in their careers, live their lives, care for their families, and pace themselves for continued phases of reopening after the pandemic and this tumultuous season in our country. On the minds and hearts of many is the desire to have contact with the divine. The true and radical nature of the Eucharist is the want and need of Catholics across the globe because our suffering has drawn us closer to Christ.

Authors and scholars have recounted that the pope’s journey to Poland marked a shift toward the demise of communism in Europe. His words of encouragement and witness of strong discipleship, in the face of the powers of evil, helped drive oppression away. There is no overestimating the impact that John Paul II had in aiding the crush of these powers. However, in typical fashion, it is very likely that the pope would deflect this credit off of himself and place it on two factors: the true presence of Jesus Christ in the Eucharist and the multitudes that gathered that day.

John Paul came to his homeland, and he performed the act most suitable and most impactful for the world and the Church: he celebrated the sacrifice of the Mass. Within the context of the Eucharist, he gave the world a message that had been preached before, but he applied it poignantly to the current circumstances: there is always meaning to our suffering and we are intimately united to Jesus when we suffer. The Mass is the perfect location to proclaim this message because it is, after all, the human entrance into that moment when Christ’s sacrifice won our final victory.

That victory is secure, and its effects are bestowed upon us when we receive the Blessed Sacrament, but those effects are fulfilled when we act and speak similar to the crowds in Warsaw on that day forty-one years ago. We must shout, proclaim, and witness the truest, good, and beautiful statement ever made by humanity: We want and need God.

An Introduction to the Theology of the Body [Study Program]

Featured image by ddzphoto from Pixabay