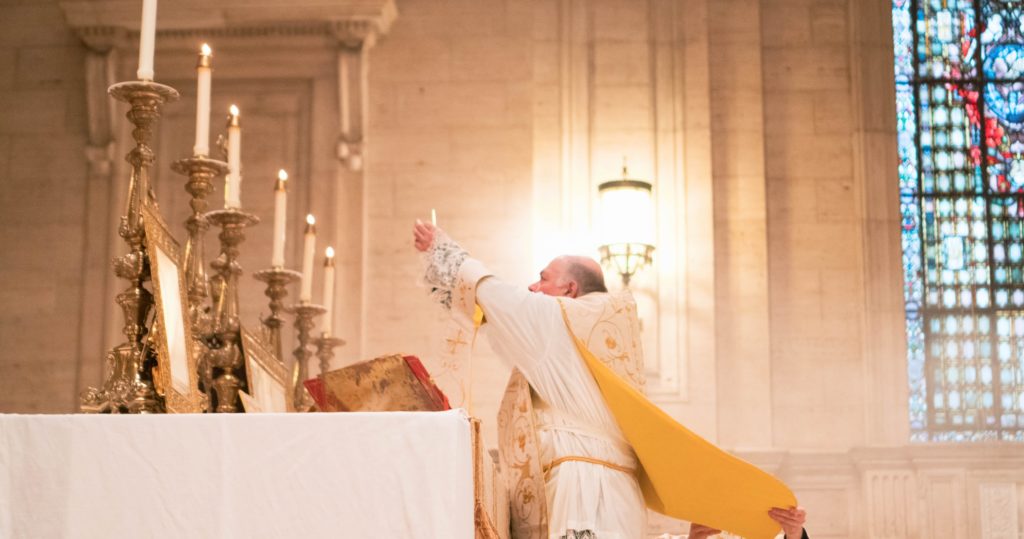 Sts. Clement of Rome and Ignatius of Antioch, writing at the end of the first century and the beginning of the second century respectively, give no doubts about the reality of the priesthood, bishops, and deacons—all rooted in apostolic succession, stemming from the first bishops as successors of the apostles. For example, around AD 96 Clement writes:

“Preaching, accordingly, throughout the country and the cities, they [the Apostles] appointed their first-fruits, after testing them by the Spirit, to be bishops and deacons of those who should believe. And this they did so without innovation, since many years ago things had been written concerning bishops and deacons. ”

“Our Apostles also knew, through our Lord Jesus Christ, that there would be contention over the bishop’s office. So, for this cause, having received complete foreknowledge, they appointed the above-mentioned men, and afterwards gave them a permanent character, so that, as they died, other approved men should succeed to their ministry.”

In the following passage, St. Ignatius—writing around AD 107—makes clear the importance of the office of bishop and even gives the first usage of “Catholic” as a proper name for (and description of) the Church:

Ignatius, Letter to the Smyrnaens, ch. 8

Both of these men knew the apostles or their close associates. Clement, the fourth bishop of Rome (i.e., the fourth pope), writes his letter within thirty years of the martyrdoms of Peter and Paul in Rome. And St. Ignatius was ordained by Peter himself in Antioch.

Is their conception of the priesthood and the office of bishop of mere corruption, a novum somehow grafted onto the ancient and pristine faith? Or, on the other hand, is this an example of apostolic tradition simply making explicit what is already implicit in the biblical witness?

It is most assuredly the latter.

Jesus, a Priest According to the Order of Melchizedek

If there’s one place in the New Testament that most powerfully emphasizes Jesus’ priesthood, it’s no doubt the Letter to the Hebrews, especially chapter seven. Hebrews comes to a crescendo of sorts in chapters 8-10, emphasizing Jesus as our high priest of the heavenly Temple, offering a heavenly sacrifice and bringing about a heavenly liturgy.

Jesus, as Hebrews explains, is a priest not according to the order of Levi, but the order of “Melchizedek.” This is significant, since the priestly tribe of ancient Israel is that of Levi—but Jesus is of the tribe of Judah (see Hebrews 7:14). So, how can Jesus be a priest?

Melchizedek is the very first person in the Bible explicitly referred to as a “priest” (Genesis 14:18). Hebrews’ reference to Melchizedek in Hebrews 7 points back to a more ancient priesthood, before the rise of the Levites—sometimes known as the “patriarchal priesthood” or “priesthood of primogeniture” (firstborn). A close reading of Genesis reveals that the ancient patriarchs, such as Abraham, Isaac, and Jacob built altars, gave the blessing, and offered sacrifice—all of which are priestly prerogatives (see Genesis 8:20; 12:7, 8; 13:4, 18; 26:25; 27:28-29; 28:18; 33:20; 35:3, 7, 14-15; 46:1). Ideally, this family priesthood—with the father in the home acting as a royal priest—would be passed on to the firstborn son (hence, the alternative name “priesthood of primogeniture”), although the irony in Genesis is that this systematically never works out (see Great Adventure Bible essay “Patriarchs,” p. 35).

This priesthood persists all the way through the Passover in Exodus 12 and even remains in effect at the initial ratifying of the covenant on Mt. Sinai in Exodus 24. It’s only at the golden calf in Exodus 32 that this patriarchal priesthood is defrocked and forfeited; only here at this point do the Levites become the priestly tribe (see Exodus 32:29), becoming surrogate “firstborn” sons (see Numbers 3:12).

With the rise of the Levites and the post-golden calf reconfiguration of the covenant, there are few new pronounced emphases that emerge—for example, daily mandatory sacrifice and an ardent emphasis upon separation from the nations (see Leviticus 18:3; 20:23). While sacrifice occurs before the golden calf, it was generally voluntary and discretionary in order to give the Lord thanks and praise. After the golden calf, there is a newfound emphasis upon the “sin” offering (and as mentioned, now mandatory on a daily basis). In a real sense, these Levitical sacrifices symbolically bear the punishment Israel deserves; but in the end, they don’t really deal with sin in a redemptive fashion—that awaits the work of Christ (see Hebrews 10:1, 4).

“Melchizedek” remerges in the Davidic period in Psalm 110:4, which describes the Davidic king as a “priest forever according to the order of Melchizedek.” David himself acts not just as a king, but also as a priest—offering sacrifice and giving the blessing (see 2 Samuel 6:17-18). In fact, David seems to be intentionally acting like a new Melchizedek—a new priest-king of Jerusalem (as Melchizedek was a priest-king of “Salem,” later identified as Jerusalem, see Genesis 14:18; Psalm 76:2).

In this respect, Jesus—in his redemptive and salvific self-offering on the Cross—bears fully the covenant curse hanging over Israel since the golden calf (and the nation’s subsequent infidelities), as well as the covenant curse of death hanging over Adam and his descendants (see Genesis 3:19; Romans 5:12). In bringing the post-golden calf Mosaic Covenant to an end on the Cross, Jesus fulfills, restores, and elevates the Abrahamic and Davidic Covenants—both of which relate back to the “Melchizedek” patriarchal priesthood. This is what Jesus is doing with the apostles—establishing them as twelve new patriarchs of the new and eschatological Israel.

Traditionally, the institution of the priesthood and the Eucharist are tied to the Last Supper when Jesus commands the apostles: “Do this in remembrance of me” (Luke 22:19). Clearly, Jesus anticipates some significant interlude here between the founding of this New Covenant at the Last Supper and his Second Coming. When Jesus refers to the “blood of the covenant” (see Matthew 26:28), he is directly alluding to the sacrifice that instituted the Mosaic Covenant at the foot of Mt. Sinai (see Exodus 24:8)—Jesus becomes the sacrifice that establishes the New Covenant. Notice that a significant amount of time has transpired between the founding of this Mosaic Covenant to Jesus’ day (some 1,500 years or so); this is by no means to calculate a timetable, but it is to show that the covenant logic points to a significant amount of time between the institution of the New Covenant and the Second Coming of Jesus Christ—that is, the covenant logic points to an extensive period of time for the sacramental age of the Church.

In and through his resurrection and ascension, Jesus is able to be with us in a way that transcends his earthly ministry. Now, at any hour of the day and at any place on the globe, Jesus is with us especially in the sacraments—forgiving, healing, restoring, and filling us with his divine life. As much as we’re in awe of Jesus’ physical miracles (which are still happening to this day), the miracle of the sacraments is even greater still. The former heal the body, the latter the soul.

This is the meaning of Hebrews 8:3, which insists that Jesus as priest must still have something to offer.

But How and Why?

Jesus continues to present his self-offering to the Father in heaven, but he does so in and through his glorified and risen humanity; this is the glorified presence and sacrifice of Christ made present in every Mass—this is why the Mass is truly heaven on earth.

Jesus prays at the Last Supper that the Father would consecrate the apostles (John 17:17), explaining that this consecration is a participation in his own consecration to the Father (John 17:18-19). This is the New Covenant priesthood, which is a share in the priesthood of the glorified and risen Jesus Christ. This apostolic priesthood shares in the ministry of Jesus (see Matthew 10:40; Luke 10:16), continuing his work of preaching, healing, and forgiving. For this reason, Jesus commissions the apostles—through the gift of the Spirit—to forgive sins in his name (see John 20:20-23). Rather, Jesus continues to forgive sins through the ordained priesthood of the New Covenant. Jesus continues his priesthood through the priest.

St. Paul on the New Covenant

A Divine Gift Made Present

Jesus is present to us in many ways—for example, in the poor (Matthew 25:35-45) and where two or three are gathered in his name (Matthew 18:20). But in a unique and sublime way, he is present to us sacramentally, most especially in the Eucharist.

In all the sacraments, Christ acts by his power; but in the Eucharist, we have Christ himself.

The sublime gift of the sacred priesthood—the gift of Jesus continuing his priesthood through the ordained priest—makes this possible.

This is indeed a great treasure in the midst of the fragile clay of our humanity. Many of the priests I’m close to know this reality in their bones, fully recognizing that they represent something vastly transcending themselves.

If the fragility of human brokenness has on occasion overshadowed the immense grandeur of this gift, that’s no reason to turn away from the divine gift. All the sacraments are encounters with the Risen Jesus. Human weakness can’t undo or ultimately thwart this wonder.

Can we see past (and through) the merely human to the divine gift made present in the Catholic priesthood?

Hebrews: The Heavenly Grandeur of the New Covenant (Podcast with Dr. Andrew Swafford)

How the Mass Finds Its Roots in the Bible [Video]

Hebrews: A Catechism in Miniature

Dr. Andrew Swafford is associate professor of theology at Benedictine College. He is general editor and contributor to The Great Adventure Catholic Bible published by Ascension, presenter of the Bible study Romans: The Gospel of Salvation (and author of the companion book), also by Ascension, and presenter of Hebrews: The New and Eternal Covenant Bible study . Andrew is author of Nature and Grace, John Paul II to Aristotle and Back Again, and Spiritual Survival in the Modern World. He holds a doctorate in sacred theology from the University of St. Mary of the Lake and a master’s degree in Old Testament & Semitic Languages from Trinity Evangelical Divinity School. He is member of the Society of Biblical Literature, Academy of Catholic Theology, and a senior fellow at the St. Paul Center for Biblical Theology. He lives with his wife Sarah and their five children in Atchison, Kansas. Follow him on Twitter: @andrew_swafford.

Featured photo by Z I on Unsplash