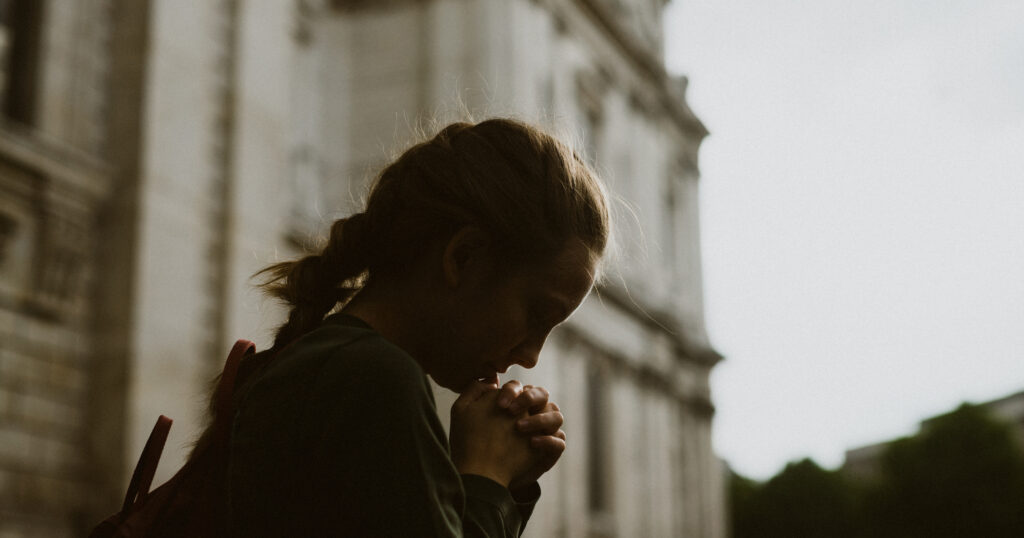 It was a few years ago when St. Maria Goretti’s remains came through town. I regret that I did not make the effort to visit them. It was early in my faith reversion and I had not yet come to appreciate the role saints play in our lives. What I remember most is hearing her story.

Maria Goretti was born in Italy in 1890 to a poor family. After her father’s death, her mother had to support the six children so Maria helped out at home with the younger siblings. The Goretti family lived next door to the Serenelli family and shared a kitchen. Though Alessandro Serenelli was nine years older than Maria he took an interest in her. He made unsavory advances which she rejected and said lewd things to her. She knew to stay away from him but one day when she was home alone, he attacked her and tried to rape her. She fought against him and succeeded in preventing the rape. She cried out that it was against God’s will and warned that he could go to hell. In his angry state, he grabbed a file and stabbed her fourteen times.

Maria was eleven years old when she died of the wounds he inflicted. As she lay dying, she forgave Alessandro and expressed her desire to be with him in heaven. For anyone to say that about his or her killer is amazing. For an eleven year old, it is miraculous. Alessandro was sentenced to thirty years in jail and because of his anger, was isolated from other prisoners. In the sixth year of his sentence, Maria came to him. She was in a garden picking lilies. As she handed them to him, they transformed into white flames. Then she disappeared.

That event changed Alessandro. He became quiet and docile and repented of his crimes. He was released from jail three years early. He visited Maria’s mother and she forgave him. Try to envision forgiving the person who brutally murdered your child!  He joined the Capuchin Franciscans and worked in their garden until his death at age eighty in 1961.

This is a story of forgiveness that led to conversion. It’s hard to imagine a change of heart such as this. We tend to put limits on God. We forget that he can do anything, including turning a murderer into a pious man. We read in the Bible about the dramatic conversion of Saul to St. Paul. What was it like seeing the man who was killing Christians experience such a change? To go from fearing him to listening to him required trust and forgiveness. How different the world would be if he hadn’t been forgiven; if he hadn’t been given a second chance.

Forgiveness is born of love and God is love. We rely on God’s grace in order to forgive someone. We have to find that soft space in our heart and release our desire for revenge. When we are wronged in a big way, and we have all been wronged, this is a hard task. It’s important to remember what forgiveness is and what it isn’t.

To forgive is not to pardon. When we forgive someone who hurt us, we are not saying, “It’s OK.” It is not OK. We also are not becoming that person’s friend. We can forgive someone and not ever have contact with that person again. Forgiveness is love and it is a choice and it can be really hard. Loving another doesn’t require fond feelings. It doesn’t mean you feel the same toward that person as you do toward a family member or close friend.

Loving means desiring the best for that person. That’s hard to do when someone has done something egregious. When we are wrongfully harmed and we suffer as a result, we yearn for justice and maybe even revenge. Forgiving that person means letting go of those desires. At a young age, Maria loved others. She knew that part of loving and forgiving Alessandro meant desiring what is best for him. It would have been easy to hope for a miserable life for him and an eternity in hell where he could suffer for his sin. Maria had the gift of grace to want him to repent and join her in heaven. God even allowed her to come to him; an event that led to his conversion.

Forgiveness is a process and we cannot do it alone. Happily, the One who excels at forgiveness is willing to walk alongside us as we work to forgive others. Jesus is the perfect teacher and in his gentle way, knowing us more deeply than we know ourselves, he can teach us how to forgive even when everything inside us wants to rebel.

My own latest journey involving forgiveness has been one of the proverbial two steps forward, one step back. I have vacillated between feeling confident in having forgiven this person and feeling a desire for revenge. I have been comfortable to never see him again and also desired a sincere apology. I have prayed for him to find peace and hoped for him to be miserable. I thought I was there and discovered I wasn’t. This voyage has been going on for two years.

I wish I could be as holy as Maria Goretti. I wish I could have that love in my heart. While it’s clear I am not that holy and I am still aspiring toward that level of love, one thing has become certain: I am moving forward. In the beginning when the pain had sharp edges that woke me in the night, Jesus was there. He reminded me how he was humiliated with the crown of thorns. He drenched me in his love, taught me to trust him, and showed me how he brings blessings from sinfulness. Jesus is helping me forgive, let go of my anger, and wish for goodness for the one who hurt me.

The Desire to Forgive

St. Maria Goretti serves as a reminder of the power of forgiveness on both the one who forgives and the one who is forgiven. As I grow closer to full forgiveness, I feel lighter and more peaceful. This experience has healed me. If I were still holding on to the anger, I wouldn’t have been able to see Jesus working in my life.

Most of us will not be mortally wounded by another but we all will be hurt. Some of those hurts will be easy to forgive; others will require sincere prayer. We may even need to pray for the desire to forgive. But we can find comfort knowing that Jesus will help us. He will soften our hearts. He will give us that desire and help us find that forgiveness.

Go in Peace: Your Guide to the Purpose and Power of Confession [Book]

Wounds of the Heart, Part 2: Anger, Envy, and Confusion