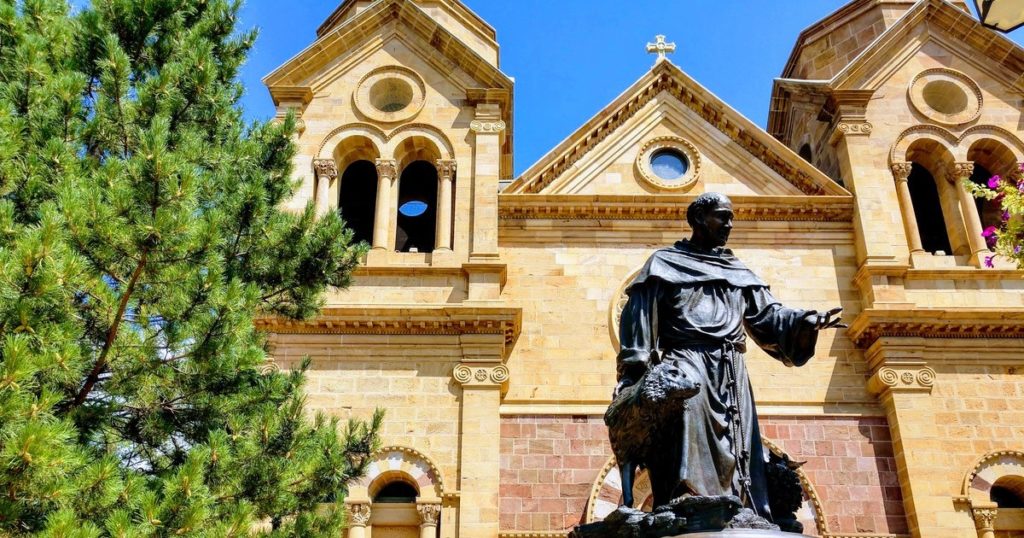 My local newspaper recently published an invitation to a demonstration for the removal of a monument on our city plaza in Santa Fe, New Mexico. The monument, erected after the Civil and American-Indian wars, once referred to Native people as “savages.” A brave individual chiseled away that horrific language long ago, to great celebration by the community. Still, now many, seeking to take action against the racism being highlighted in our country, want to see the monument fall.

There are arguments on either side of the debate regarding historical monuments which bear the best interests of communities that have experienced discrimination in mind.  I deeply understand the desire to remove such symbols. After eighteen generations in Santa Fe, I don’t like any reminder of my forebearers being called “savages” or ever being treated as such. As a minority woman who’s made my life and career in fields typically dominated by white males, I know what historical attitudes of discrimination can do to a person today.

I imagine in the hearts of people of goodwill who attend these rallies, the ultimate desire is not to destroy a piece of bronze or stone but to destroy racism and injustice. They must know that destroying a monument doesn’t do this, but it still feels right in a certain way. I imagine they seek relief, not unlike the one felt in burning an effigy (which is also a popular practice here in Santa Fe). To destroy a symbol, when it is all one can do, makes manifest the desire to destroy the reality.

What Is a Symbol and What Is Sacred?

The reason I find myself compelled to respond to this news is that the tweet from the organizers of the protest, a group whose name and artwork seems to brand them among the activists who encourage a return to native religion and a rejection of our state’s Catholic past as a vestige of colonialism, was followed almost immediately by a tweet suggesting that the St. Francis Cathedral Basilica should be the target of calls for destruction instead. Here is a screenshot:

This doesn’t seem too idle of a threat, as we have already seen Catholic churches targeted for violence in riots around the country. While the media, like the newspaper that promoted attendance at the plaza protest, wants to support the sentiment of those wishing to fight injustice and target its “effigies,” it does not know why a Catholic Church is something quite different from a symbolic monument. This is sadly understandable because according to recent research, seventy percent of Catholics also don’t know that Christ is truly present in their churches.

A Catholic Church is not a building so much as a tabernacle—a flimsy tent for a sacred presence. It houses something real, not symbolic, in the same way that a camping tent might house you. Doing violence to your tent comes dangerously close to doing violence to you—a real person. Allow me to offer a more concrete example.

Tearing down statues of conquistadors is another controversy raging in my state right now, resulting in violence that has seen at least one member of the community shot. Destroying a statue, however, does no actual harm to a conquistador. The conquistador is not inside the statue. Christ, however, is physically present inside a Catholic church. (For a deeper exploration of this claim, see some of the resources mentioned in my last article here.)

The media and the protesters don’t know this. We Catholics who do know need to help others understand that our churches cannot be treated as “effigies of injustice” like other structures that even some Catholics might in good conscience want to see destroyed. This, however, gives rise to a different question: if our Churches are associated with colonialism, how should we view and respond to our colonial past?

The Catholic Faith and Colonialism

As always, human history is complex, and the history of the Church especially so, because it is a divine institution that makes use of free-willed humans, and humans can be terrible. That doesn’t mean that God is. It means that we are, and God, being the Father that he is, lets us make our terrible mistakes. However, a complex history means one that has both bad and good points, and the media narrative being presented to us is one that amplifies the bad ones.

Was there military brutality in the conquest of the Americas? Yes, as there is, unfortunately, in almost all human conflict. Did Catholic settlers mistreat Native Americans, and is this hypocritical in light of their professed Faith?  Tragically and horrifically, yes. Did Catholic settlers free Native Americans from oppression? The answer here is also yes—a giant, resounding yes which saw to the salvation of lives and souls on an unprecedented scale.

Imagine the physical and spiritual terror the average citizen of the largest American civilization lived under prior to the time of Catholic Spanish Colonial contact. Historians estimate that in the year 1487, just prior to the Spanish arrival, the Aztecs sacrificed close to 100,000 people. To do this, they waged constant war upon their neighbors to ensure a steady stream of victims, as the demands of their gods were too great for even their own massive population to satisfy.

Imperfect as Spanish rule might have been, the system it replaced was not an egalitarian utopia. It was not a society in which the news of a God who did not demand human sacrifice but instead gave his own Body and Blood, present in the Eucharist, came as an unwanted imposition. Instead, the Catholic Faith meant salvation on many levels to the average citizen, although it meant a loss of power to the ruling classes of the time. (See my earlier article on a native people who fought with the Spanish for their liberation from religious terror here.)

In the art accompanying the invitation to the protest mentioned above, the flashing lightning symbol that destroys the monument is associated with the Tewa god Avanyu, the horned or feathered serpent Stormbringer. Its cult bears striking similarities to that of the Aztec feathered serpent Quetzalcoatl and related figures in native religions worldwide. Its invocation is part of a pattern among activists lately which, while condemning Catholics and their churches as colonial vestiges, idolizes and encourages a return to the worship of other gods.

It’s become an acceptable symbol of standing against the oppression of native peoples and other minorities to do this.  Even Catholics hardly object. The first Twitter user to respond to the threat to the cathedral in Santa Fe used a Chi-Rho, a symbol of Christ, as his screen avatar. He quibbled on a point of archeology, but did not react with horror to the suggestion of desecration. In our cultural environment, it’s become too easy to couch the acceptance of evil as respect.  It is not.

Lead Others to Christ

If we want social reform, or truly want any good to come about in the world, let’s not turn away from God nor normalize or glamorize the turning back to demonic forces. The demons did not respect the cultures they decimated. Jesus, on the other hand, loves the people and cultures our society oppresses more than you or I can. God himself wants their freedom from mistreatment, and he is the way to the social solutions that we seek.

In fact, he is the only way. Where we have failed to act in love is where we have failed to remain in his grace. We humans prove time and time again, as conquistadors and colonialists, rioters and robbers, that on our own, we are incapable of being as good to each other as a perfectly just society would require. We actually need the supernatural intervention of grace.

Meanwhile, the source of all grace, Christ himself, waits quietly in our tabernacles, longing to help if only we would allow it. Let’s neither threaten him nor fail to protect him in the tabernacles of our churches, but now more than ever, let us who long for justice and equality seek him there! In this time of deception and violence, let us have the courage to lead others to him there.

What Should We Believe About the History Channel’s Program, Ancient Aliens?

AnnaMaria Cardinalli sees beauty as a means for evangelization and has performed in the world’s great musical venues. These range from Lincoln Center, Kennedy Center, and Carnegie Hall, to the really important ones, like singing on EWTN or teaching Panis Angelicus to the first communicants she prepares with her mom, Giovanna, at their local parish. She is the author of Music and Meaning in the Mass. She bleeds blue and gold. Her Ph.D. in theology is from Notre Dame, and she’s a service-disabled Navy veteran.  Her work in Iraq and Afghanistan exposed human rights violations against children, and she remains dedicated to the protection of God’s littlest ones.