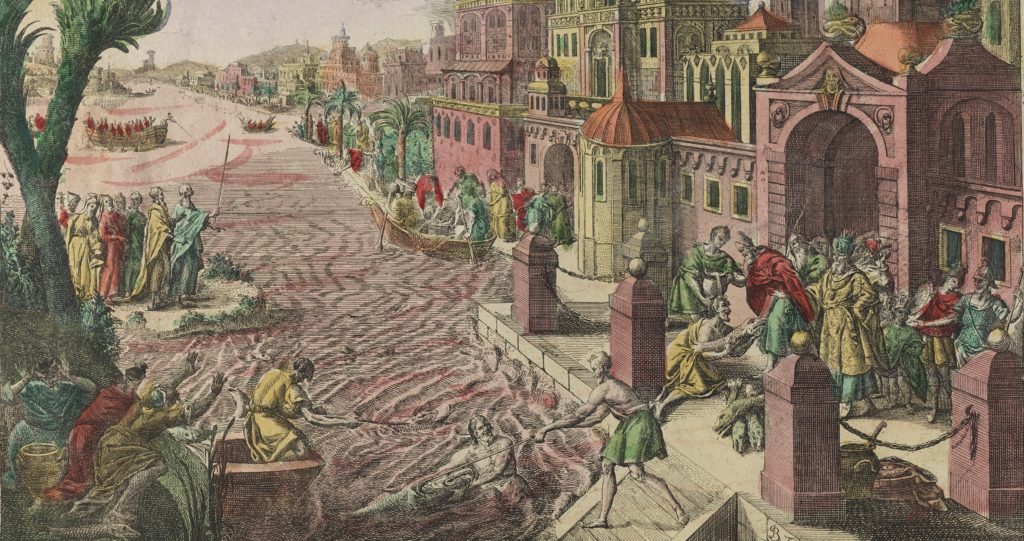 We are living in unprecedented times. In a matter of weeks, COVID-19 has managed to usurp the rhythm of our daily lives, throwing us into a chaotic, fearful, and challenging existence. With hundreds of new cases being reported each day, stay at home orders in effect worldwide, and churches being instructed to close their doors, it can feel like things are going from bad to worse—despite the countless prayers of petition being offered for an end to the pandemic. This naturally begs the question, where is God in all of this?

Though the actual circumstances surrounding this specific time of darkness are unique, the pattern of ever-increasing turmoil plunging mankind into a seemingly inevitable end has been repeated with surprising regularity throughout the course of human history. And why? Because the conclusion of such dire circumstances is always the same—namely, the manifestation of God’s glory, revealed in a sudden turn-around so miraculous and unexpected that it must be attributed to God—even by skeptics and non-believers.

Take the Exodus story, for example. When Moses is tasked with approaching Pharaoh to demand the release of the Israelite slaves, God warns him from the outset:

“I will harden Pharaoh’s heart, and though I multiply my signs and wonders in the land of Egypt, Pharaoh will not listen to you.”

The reason for this is clear. It is only after all the signs and wonders, after the Lord ransoms Israel by his strong hand, and after Pharaoh’s change of heart and subsequent pursuit of the Israelites that, “the Egyptians shall know that I am the Lord” (Exodus 7:5).

Indeed, had Pharaoh not persisted in refusing the Israelites their freedom, the Lord’s glory would not have shone forth as it did—first through the plagues, then in the pillar of smoke and fire, and finally, in the most dramatic act of all, the parting of the Red Sea. But in order for this increasingly undeniable glorification to take place, it was necessary that events progressed in such a way that all seemed lost, at least by human estimation. The glory of the Lord shines brightest, after all, when the darkness surrounding his people is at its most dense.

There is perhaps no greater example of this truth than the fall of Adam and Eve. Having eaten the forbidden fruit of the tree of the knowledge of good and evil, the two are expelled from the Garden of Eden. The resultant darkness must have been overwhelming! No longer would Adam and Eve look upon the face of their Lord. No longer would they call him friend. No longer innocent, they would no longer be spared the wages of sin, which is death (Romans 6:23).

And yet, this awful occurrence, this loss of innocence, this betrayal of relationship with God, is hailed during the Easter Vigil as the, “blessed fault, which earned for us so great, so glorious a Redeemer!” (Exsultet). After the fall, things must have seemed dismal. Mankind had been cast into a world where sin and death had the final say. For centuries life went on, with sin increasing and darkness intensifying, until at last God chose to act, glorifying his name by sending his son, light of the world, into this dark and broken abode, that his death and resurrection might shine so brightly amidst the surrounding darkness that even the unbelievers would have no choice but to acknowledge the truth:

The present time certainly is unlike anything that has ever been experienced before, but though it may seem as though the Lord is unresponsive to our plight, we can rest assured in the knowledge that he is not absent, but merely asleep, awaiting that moment when all hope seems lost to awake and to glorify his name (see Mark 4:37-41).

Let us, like the disciples, continue to pray that he arises and manifests his glory once more, echoing the words of Jesus himself: “Father, glorify your name.” And in response, when the time is right, we will see him act, behold his glory, and hear him reply:

“I have glorified it, and I will glorify it again.”

Why Is the God of the OT So Vengeful and Violent?

The Amazing Science of Recent Eucharistic Miracles: A Message from Heaven?