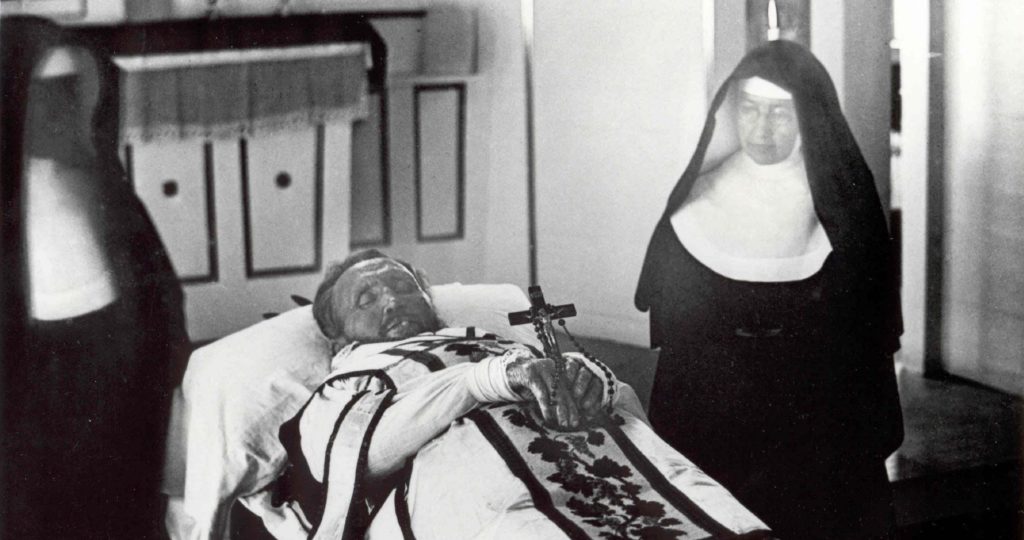 In every age of the Church, there are holy men and women who respond to the challenges, sufferings, illnesses, or injustices that plague the communities, countries, or the world. Saints are made through suffering. Jesus said:

“whoever wishes to come after me must deny himself, take up his cross and follow me.”

Those who we call saints today are the ones who readily responded. Many of us have never experienced a global crisis like we are facing today with COVID-19. For American Catholics, it was impossible to imagine churches closed, Masses suspended, and all public liturgical or prayer gatherings made illegal simply due to the number of people attending. And yet, here we are.

Many of us may be thinking, “Well, now what?” Rather than turning to discouragement or even despair, we must return to Jesus’s words, “unless you pick up your cross.” The cross is an instrument of torture and death, but only when it is not united to Jesus. Because Jesus has redeemed the world through his passion, death, and resurrection, our crosses become the gateway into sharing in his glorified life. Discipleship comes at the cost of dying to ourselves and everything we hold on to—even our usual prayer routines and preferences—and giving it all to the Father. When we pray with Jesus, “not my will, but yours be done,” we allow God to work in and through us. And with God, all things are possible.

God’s grace will prevail through those who are willing to be his humble and obedient instruments. The saints lived extraordinary lives because they gave their lives completely to God. Learning about the saints can encourage us to cling to the Faith, to place our hope in God, and to find the strength to imitate their obedience to God’s will. To find courage during the current COVID-19 crisis, let us look at the actions of three saints who faced sickness with remarkable faith.

St. Charles is renowned for his intellectual contributions to the Church’s reform through the Council of Trent. He was a nobleman by birth, but he gave it up for the pursuit of a life dedicated to the Church. As a bishop, he was known for leading his flock by example and calling them to greater holiness through intense prayer, fasting, and almsgiving. He worked tirelessly on reforming seminaries and the clergy, calling for greater discipline and attention to penance and the concerns of the poor.

In 1576, the plague broke out in Milan, where he was serving as bishop. In an unprecedented manner, St. Charles did not seek to isolate himself from the plague, rather he ran toward it. St. Charles sought to minister to those who were suffering the most in hospitals, visiting them and offering them the sacraments. It is said that St. Charles strove to feed thousands of people every day by going into severe debt to pay for the food. St. Charles lived for eight years after the plague, dying at a young age of forty-six from illness and a life completely spent for the people he served.

In the late 1880s on the Hawaiian Island, Molokai, people suffering from leprosy were alienated from the rest of the islands and cast out of society. Fr. Damien de Veuster, now known as the “Apostle to the Lepers”, lived and worked within these colonies, providing lepers with the care and dignity they needed and which no one else was willing to offer.

When requests were sent to religious communities across the United States for more help in running the hospitals and homes for girls and boys on the islands, no response came except from Mother Marianne Cope. She replied to the request:

“I am not afraid of any disease, hence, it would be my greatest delight even to minister to the abandoned lepers.”

She, along with six sisters, went to Hawaii and eagerly cared for over two hundred people affected with leprosy.

A native of Germany, Mother Marianne’s family had immigrated to New York when she was a young girl. When she entered religious life, she was eager to help the sick, especially the outcasts. This desire of her heart is perhaps the reason she responded so readily to the call for help in Hawaii. Establishing hospitals and homes for the people there not only gave the people dignity and care, but it also encouraged religious vocations. Mother Marianne’s sisters still serve on the island of Molokai to this day. Mother Marianne died of natural causes in Hawaii, never having contracted leprosy.

Like St. Charles Borromeo, most people do not associate St. Catherine of Siena with fighting illness. St. Catherine is a Doctor of the Church and is most famously known for her book, The Dialogues, and for her work of bringing the Avignon papacy to an end and returning it to Rome. St. Catherine, a mystic from childhood, was a third order Dominican and lived a life of severe penance and discipline.

She is known for performing numerous miracles, for intense spiritual gifts, and her closeness with God. St. Catherine is certainly a giant when discussing the saints.

In the mid-1300s, the bubonic plague—or the Black Death—had taken over Siena. Some of St. Catherine’s siblings died in the plague, as many people were unable to escape it. St. Catherine traveled around Siena, caring for the sick as much as she could. She is known for having miraculously curing two men, a dear friend, and a hermit, of the disease, and for multiplying bread through her prayers when famine became widespread. St. Catherine never contracted the plague, but rather inspired the faith in many hearts because of her work.

A World in Need of Saints

Today, amid this global crisis, we need saints. One hundred years from now, what will be said about this generation and how we responded to the challenges COVID-19 has presented to living the Faith? Will there be stories of healthcare workers who sacrificed their wellbeing for the sake of the sick and vulnerable? Will there be accounts of communities coming together in prayer and sacrifice, through which a renewal of faith and culture takes place? Let us pray that God gives us the grace to respond to his will to give of ourselves to a world in desperate need of him.

“For whoever wishes to save his life will lose it, but whoever loses his life for my sake will find it.”

A Rule for Your Domestic Monastery

How to Worship at Home with Your Family

Caroline Harvey is the associate communication director for the Archdiocese of Milwaukee. Prior to working at the archdiocese, Caroline worked in various ministry positions throughout southeast Wisconsin, focusing on teaching and discipleship. She is currently pursuing a doctor of ministry degree in liturgical catechesis from the Catholic University of America. She has a master of arts degree in biblical theology and a bachelor of arts in communications media from John Paul the Great Catholic University.

Featured image sourced from Wikimedia Commons: Father Damien on funeral bier with Mother Marianne Cope and Sister Leopoldina Burns by his side on Monday April 15, 1889, the day of his death. Presumably photographed by Dr. Sydney B. Swift. {{PD-US}}

Highlights from a Pilgrimage to Rome
3 Life Lessons from St. Rose of Lima
Has Ascension's free media strengthened your faith?
You can now offer ongoing support for this content with a recurring gift.
Support Ascension