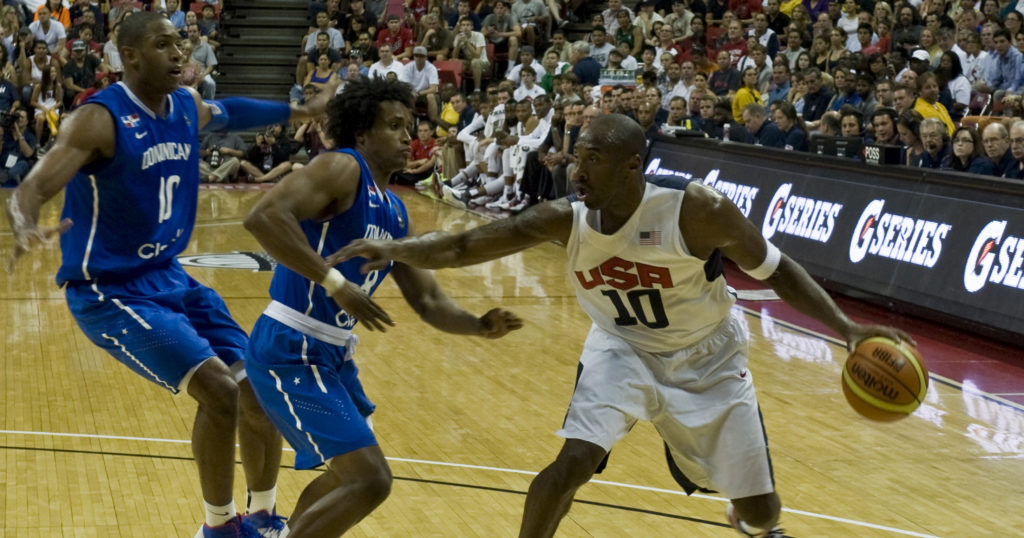 As the Kansas City Chiefs played their way to capturing the Vince Lombardi Trophy at Super Bowl LIV, many tributes to Kobe Bryant were made throughout the night, including before kickoff and at the halftime show. Days before her halftime show performance, Shakira—speaking on the tragedy—mentioned:

“Life is so fragile. And that’s why we have to live every moment as intensely as we can.”

How true these words are, and they are something that every practicing Catholic Christian should be keenly aware of. Being a faithful Catholic himself, Bryant certainly was aware.

It’s not very often that the death of a sports star will make headlines in both the secular news media and the Catholic news media. But then there aren’t too many sports legends out there like Bryant. His death on Sunday, January 26 has sent shockwaves throughout the globe as he died at the young age of forty-one, along with his thirteen-year old daughter and seven others. The sports world has been paying tribute to Los Angeles Lakers all-star, and the tributes are not just from those playing basketball.

We as Catholics mourn and pray for his soul and his daughter’s soul: we’ve lost a brother and sister in Christ, and it calls to mind how fragile our lives are. We don’t know the day or the hour of our deaths. But his example of faith, in his final hours especially, should be seen as his greatest accomplishment above all else.

There’s a meme I’ve seen floating around before, but have never been able to save it. Basically, it shows a picture of a young child standing at home plate, ready to swing a bat at the incoming baseball. The text of the meme more or less says, “Your child has less than a 0.5 percent chance of becoming a professional sports player. On the other hand, your child does have a one hundred percent chance of standing before God on the day of his or her judgment. Make getting your children to church the priority.”

I’ve talked about this meme with many of my fellow catechists and other directors of religious education as well. When the topic of biggest challenges come up, almost invariably it has to do with the parents putting things like sports, dance, and other activities before passing on the Faith. Consider the words of Sacred Scripture:

Although these words were spoken to Israel centuries ago, they should still resonate with us as Christians today. If one can’t even get themselves, let alone their child, to the Holy Sacrifice of the Mass at least every Sunday and Holy Day, how can one say that they love God with all their heart and soul? How can one diligently teach their children the ways of the Lord if they see no good example? This is one of the things that worries pastors and catechists most as they try to disciple the children that are coming to their parishes for the sacraments and religious instruction. This is why it was such a consolation to hear that Bryant ensured that his daughter knew that a Person, and not a sport, was Lord of their lives.

Shortly after the news broke that morning of Bryant’s helicopter going down, a report came out on social media from a priest in the Archdiocese of Boston, confirming the following:

Reports have since conflicted on whether or not Bryant was just praying before the early Mass or actually was able to participate, but it was confirmed by the parish that he and his daughter received our Lord Jesus in Holy Communion before leaving church. In any case, Bryant put God first, and this was a powerful example to his daughter. This is the example every father should give to his children: Jesus comes first before anyone or anything else. Bryant was a regular Mass-goer, and even frequently attended daily Mass. Bishop Timothy Freyer of the Diocese of Orange where Bryant resided, recalled the following in his statement on the tragedy:

“Kobe was an icon who inspired us through his words and actions to set our goals, work hard and achieve our dreams. He was a committed Catholic who loved his family and loved his faith. A longtime Orange County resident and parishioner in our Diocese, Kobe would frequently attend Mass and sit in the back of the church so that his presence would not distract people from focusing on Christ’s Presence.”

“Please join me in praying for the victims. May God grant their loved ones peace and bring them comfort during these difficult times.”

How beautiful, then, that Bryant ensured his daughter would be in the presence of Christ on the day dedicated to our Lord. As the meme quoted above exhorted, Bryant got himself and his daughter to church because that was a priority for him as head of his household. Even though he had to get his daughter to her basketball game that morning, it was made clear that Jesus was the first thought of the day, and they were in his Presence before boarding that helicopter. This is a testament to Bryant’s faith, a faith which he grew in exponentially as his career went on.

Although he and his wife Vanessa received the sacrament of Holy Matrimony at St. Edward’s Parish in Dana Point, California early in his basketball career, it wasn’t until after he was accused of a crime that he had a great conversion to the Faith of his youth. In an article for CNN, Fr. Edward Beck noted Bryant’s remorse and repentance:

“After being charged with felony sexual assault, he held a news conference at Staples Center in Los Angeles with his wife by his side and said, ‘I sit here in front of you guys furious at myself, disgusted at myself for making a mistake of adultery.’”

To call out his sin and apologize publicly for it is almost unheard of, especially in a culture that doesn’t necessarily find things like adultery that big of a deal. About five years ago in an interview with GQ Magazine, Bryant opened up about how in the aftermath of all this, his faith in Christ saved his marriage to Vanessa, and led him back into full communion with the Church:

“Was I afraid of going to jail? Yes. It was twenty-five to life, man. I was terrified. The one thing that really helped me during that process—I’m Catholic, I grew up Catholic, my kids are Catholic—was talking to a priest. It was actually kind of funny: He looks at me and … he just said, ‘Let it go. Move on. God’s not going to give you anything you can’t handle, and it’s in his hands now. This is something you can’t control. So let it go.’ And that was the turning point.”

What I love most about this selection is how he states, “I am Catholic”. So often, unfortunately, you hear about how celebrities were “raised Catholic”, and the faith of their fathers no longer has any effect on them. This was not so for Bryant, and he made it a point to see that his kids were Catholic. His kids were marked for Christ, and he was proud of that, as any father should be.

In another interview, Bishop Freyer commented on how, when participating in Mass, “[Bryant] would frequently wait until the entrance procession got at least part of the way down the aisle and he would just come in and go into one of the back pews so that he wouldn’t distract the people. He wanted people to focus on Christ’s presence, not his presence.” Others shared their stories of how they worshipped together with Bryant, and although he was a relatively quiet man, he had a deep faith that he practiced day in and day out in front of his family.

So what should be our take away from all this, especially for those of us that are committed Catholics and sports fans? For one, it should remind us of our own mortality. I know it did for me. Bryant leaves behind a wife and three kids. Again, we do not know the day or the hour of our deaths. We must always be prepared. What stands out, again, is that Bryant made it a point to get himself and his daughter to church. Which brings me to the second take away we should all have from this event. There is nothing more important than visiting our Lord Jesus in the Blessed Sacrament and receiving him into our very bodies and souls. Absolutely nothing.

Bryant was an NBA champion, dedicated to his trade, which is why conversations can be had about him being one of the best basketball players of all time. And despite that, he would kneel in humble submission and adoration before our Lord Jesus during the Holy Sacrifice of the Mass. This should give all of us great pause—parents, students and athletes alike—if we keep coming up with excuses to not get ourselves (and/or our children) to church on Sundays because of a football game or basketball practice. We have no excuses now if a future Hall of Famer could get himself up before 7:00 AM to ensure he and his family members could be in God’s house together.

As we pray for the repose of his soul, his daughter’s soul, and those of the others involved and their families, let’s take the opportunity to examine our own practice of the Catholic Faith. Are we really giving God our all, or are we making excuses despite all the great gifts and graces he has poured upon us? We may gain a championship, a scholarship or other accolades if we dedicate all our time to sports and other activities, but what will it matter if we lose sight of God. Let our Lord Jesus’ words be something to reflect on:

“For what will it profit a man, if he gains the whole world and forfeits his life?”

Bryant had his priorities straight. Let us hope we can do the same for our own sake and our children’s sake.

Meet the Presenters of The 99: Sister Miriam

Jesus: The Way, The Truth, and the Life [study program]