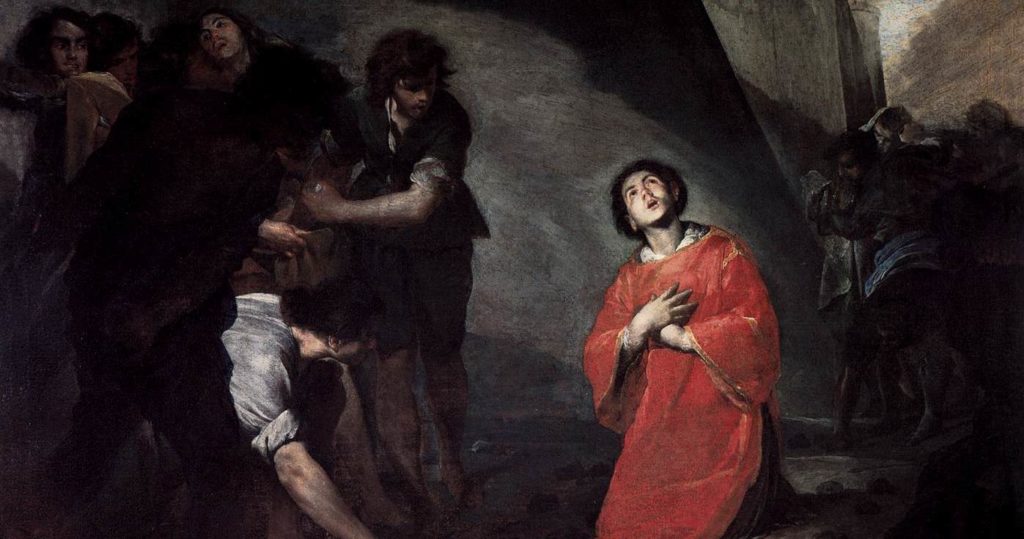 St. Stephen, deacon and first martyr of the Church, died at the hands of Saul somewhere in the mid-30s AD (see Acts 7:58). We celebrate his feast day today, December 26. Here, we will look at the witness of Stephen’s death, as well as how his speech points to the heavenly splendor of the New Covenant.

In the deep subplot of the New Testament and indeed the entire Bible is the story of Exodus and New Exodus: Jesus has delivered us through a New Exodus, even greater than the one from Egypt. “Egypt” in the Bible is both a reality and a sign of something deeper—pointing to an even deeper bondage to an even more insidious enemy.

Jesus has delivered us not from Egypt, Babylon, or Rome, but from sin, death, and the devil. And in the movement throughout the Bible, God’s final destination for his people was never merely an earthly plot of land. Rather, the movement from the Exodus to Wilderness Wandering and ultimately to the Promised Land was always a sign of something greater, pointing to the ultimate Promised Land—heaven itself. In fact, in the New Covenant, we already participate in this heavenly reality right now, as is manifest here in the Letter to the Hebrews:

You have come to Mount Zion and to the city of the living God, the heavenly Jerusalem and to innumerable angels in festal gathering, and to the assembly of the first-born who are enrolled in heaven and to a judge who is God of all, and to the spirits of just men made perfect, and to Jesus, the mediator of a new covenant, and to the sprinkled blood that speaks more graciously than the blood of Abel.”

Did you catch that? The New Covenant family of faith is the heavenly Jerusalem, and it includes angels! Not only angels, but also “spirits of just men made perfect.”

Where Jesus Was and Where He Is

In my master’s program at Trinity Evangelical (where I was the only Catholic and was affectionately coined “Catholic Andy”) I had classmates very open to the Catholic doctrine of the communion of saints based on this very passage. In context, Hebrews 11 just went through an Old Testament hall of fame, of sorts, mentioning all the great heroes of faith that have gone before us (Abraham, Moses, David, not to mention allusions to Daniel, Isaiah, and the Maccabean martyrs). Hebrews 11:39-40 then states (emphasis mine):

“And all these, though well attested by their faith, did not receive what was promised, since God had foreseen something better, that apart from us they should not be made perfect.”

So, when Hebrews 12 refers to “spirits of just men made perfect” (Hebrews 12:23), it’s likely a reference back to these Old Testament saints who have gone before us. They are now part of this New Covenant family of God. Thus, in the New Covenant, death does not sever our union with one another: the New Covenant family of faith includes and embraces both angels as well as the saints who have gone before us.

Jesus, too, pointed to a time when we would worship “neither on this mountain nor in Jerusalem” (John 4:21), but in “spirit and in truth.” The ultimate Promised Land is heaven itself. But we participate in this heavenly reality now in the Eucharist: for wherever the king is, there is the kingdom; and wherever the Eucharist is, there is the king—a Eucharistic kingdom, for those who have eyes to see it.

I once tried to drive this point home with a group of students; we had just completed a pilgrimage to the Holy Land—seeing, for example, Nazareth, Cana, Mt. Tabor (the sight of the Transfiguration), the Sea of Galilee, the Jordan River, and even the empty tomb of Jesus Christ! As we were leaving, I said, “As amazing as this has been, this is where Jesus was—the Eucharist is where Jesus is.” As unbelievable as that pilgrimage was, I wanted my students to realize something even greater in their midst every day.

After Stephen is arrested, he points out how God was with many of their great forefathers in faith apart from the land of Israel—how God first came to Abraham “in Mesopotamia” (Acts 7:2), how God was with Joseph in Egypt (7:9-10), and how God appeared to Moses in the burning bush while he was exiled in the land of Midian (7:29-30). For Stephen, these Old Testament examples foreshadow how—in the fullness of time—there is a movement from the Temple made with stones to the Temple of Christ’s Risen Body (see John 2:19-21), from a plot of land to worship in spirit and in truth. The earthly Temple gives way to the Temple of Christ’s Mystical Body—gathered in worship of the Risen Lamb, especially in the Holy Eucharist.

As the Catechism of the Catholic Church suggests, there is a relationship between the breaking of Christ’s body on the Cross and the giving way of the earthly Temple. In Christ’s death, the Old Covenant comes to an end—something definitively symbolized in the destruction of the Temple in AD 70 (bringing an end to the Levitical priesthood and the Old Testament sacrificial system). When Jesus died, the Temple veil was torn—suggesting a two-fold symbolism: positively, God’s presence will now be universally unleashed and no longer confined to the Holy of Holies (something on full display in tabernacles across the world, where anybody can go before God’s Holy Presence at any time); and negatively, the tearing of the veil foreshadows the destruction of the Temple. As the Catechism states (emphasis mine):

“[Jesus] identified himself with the Temple by presenting himself as God’s definitive dwelling-place among men. Therefore his being put to bodily death presaged the destruction of the Temple, which would manifest the dawning of a new age in the history of salvation.”

What is interesting about Stephen being stoned to death in Acts 7 is how Luke parallels the deaths of Stephen and Christ. In other words, Stephen’s death appears to recapitulate that of Christ. For example, as Stephen is about to die, he calls out “Lord Jesus receive my spirit” (Acts 7:59)—very much like Jesus says from the Cross in Luke 23:46: “Father, into your hands I commit my spirit.” And Stephen—like Jesus—forgives his executioners: “Lord, do not hold this sin against them” (Acts 7:60), just as Jesus famously says from the Cross:

“Father, forgive them, for they know not what they do.”

This same thinking shows up of course in Saul’s encounter with the Risen Jesus on his journey to Damascus, where Jesus says:

“Saul, Saul why are you persecuting me?”

Jesus doesn’t say, “Why are you persecuting my followers” or “my disciples.” The reason is because the link between Jesus and his followers is something real—the Church is the Mystical Body of Christ.

In baptism, we enter into the death of Jesus Christ and thereby enter into his risen life (see Romans 6:3-4). Christianity, in fact, can be boiled down precisely to this: the Holy Spirit reproducing the life, death, and resurrection of Jesus Christ in and through each of us. This begins in baptism, and it is consummated in the Holy Eucharist—where we are offered up to the Father in him, with him, and through him.

Notice how the Mass prevents the Paschal Mystery from ever being locked in the past. While rooted in history, the Paschal Mystery is ever-present through the actions of the Sacred Liturgy—of which Christ is the principal actor (see CCC 662)—so Christians of every generation can enter into his life and death. This is what St. Paul means when he says:

“I have been crucified with Christ. It is no longer I who live, but Christ who lives in me.”

St. Stephen and all the martyrs embody this recapitulation of Christ’s life in a concrete way. But this is the path for us all: for some, it’s a red martyrdom—like St. Stephen (and which is still occurring to this day). For others, this will entail a white martyrdom, a daily death to ourselves—that Christ may live through us. This begins in our baptism; it is consummated in the Holy Eucharist; and it continues in the outpouring of our lives in love to others—whereby Christ’s life is reproduced in and through us. This is what Christianity is all about: to love as Christ loves, to the point of giving our lives—in one way or another; as Christ said:

“Greater love has no man than this, that a man lay down his life for his friends.”

How can St. Stephen’s witness (and that of current and recent martyrs) inspire us to make our lives not about us (our comforts, our projects, our ambitions), but about something greater?

God’s Army: the Truth about Angels

A Biblical Reflection on the Hail Mary