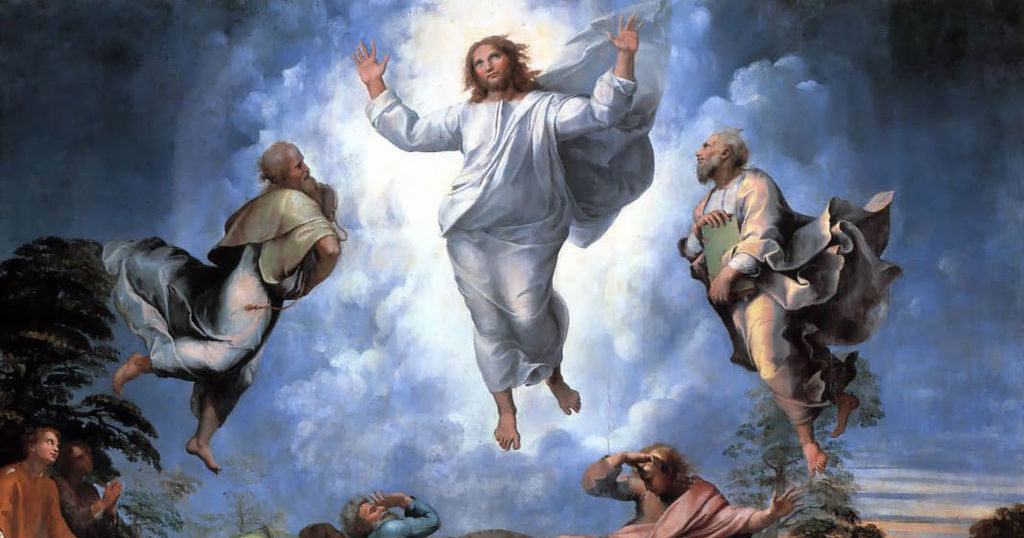 The Feast of the Transfiguration doesn’t seem to get a whole lot of attention today. Unlike other feasts of our Lord, (such as the Nativity and the Ascension), we celebrate the Transfiguration as a simple feast and not as a solemnity. We can only speculate as to why, but one thing is for sure, it wasn’t always this way. Its origins go back to the biblical feast of Sukkot, which along with Passover and Pentecost (Shavuot) was one of the three great feasts of ancient Israel.

In the biblical accounts of the Transfiguration, we read about Jesus taking his three closest disciples up a high mountain where he is transfigured before them. While there he meets with Moses and Elijah. Only Luke’s Gospel tells us what it was they were discussing: his departure, literally in Greek, his exodos:

“who appeared in glory and spoke of his departure, which he was to accomplish at Jerusalem” (Luke 9:31).

At seeing this, Peter got the curious idea to build three booths for Jesus, Moses, and Elijah.

Peter almost certainly was thinking of the Jewish feast of Sukkot, which means “booths” or “tabernacles.” John simply calls it the Feast of Tabernacles in his Gospel (see John 7:2).

The booths commemorate the makeshift dwellings Israel lived in as they were wandering in the desert prior to their conquest of the Promised Land (see Leviticus 23:33-43). However, when God first instituted this feast on Mount Sinai, it had nothing to do with Israel’s wanderings. Instead, it celebrated the fall harvest, and the Israelites called it the Feast of Ingathering.

“And you shall observe the feast of weeks, the first fruits of wheat harvest, and the feast of ingathering at the year’s end” (Exodus 34:22).

On the one hand, Sukkot commemorates a time when the people of Israel had no land, and therefore had no harvest. On the other hand, it celebrates the great harvests Israel enjoyed when they were dwelling in the Promised Land. It is a celebration of already and not yet. Like many Old Testament feasts, it looks forward to a future fulfillment in Christ.

It’s fitting that at his Transfiguration Jesus meets with the two greatest prophets of the Old Testament, Moses and Elijah. Moses was himself transfigured on Mount Sinai (see Exodus 34:29-35). However, he never entered the Promised Land or celebrated the harvests of the land. He lived in a booth along with the rest of Israel until his death.

While Elijah did live in the Promised Land, he didn’t fare much better. During his time the harvests were few and far between. Due to the unrepentant sins of Israel, the land saw no rain for three and a half years. It only took a few generations after the death of Elijah for the sinful people of Israel to be sent into exile. They once again had to wander in a land not their own awaiting a future redemption.

Exodus from Sin and Death

During Jesus’ day, the people of Israel had returned to the land, but it was no longer their own. They lived under the thumb of the Roman Empire. What’s worse, they were still under the dominion of sin and death. But that was about to end.

Jesus chose to reveal his divine glory in the Transfiguration during the Feast of Tabernacles immediately after his first Passion prediction:

“From that time Jesus began to show his disciples that he must go to Jerusalem and suffer many things from the elders and chief priests and scribes, and be killed, and on the third day be raised” (Matthew 16:21).

Peter couldn’t fathom how the man he had just proclaimed to be “the Christ, the Son of the Living God” could be crucified by the Romans (Matthew 16:16, 22-23)! Shouldn’t Jesus, God’s chosen Messiah, simply march into Jerusalem and drive out the Romans? What Peter didn’t understand was that the new and definitive exodus is not from Egypt or Rome. Rather, it is from sin and death.

Jesus revealed to his apostles that day that he is, indeed, the Christ, the Son of the Living God. But he was not sent to march upon Rome to defeat Caesar. He was sent to march straight into Hades to defeat death itself! His glorious Transfiguration made it clear that the gates of Hades would have no way to withstand him:

“And I tell you, you are Peter, and on this rock I will build my church, and the powers of death shall not prevail against it” (Matthew 16:18)!

The Transfiguration is a feast of already and not yet. Already we can see that Christ has the power to and has indeed conquered sin and death. By his cross and resurrection, he has redeemed the world. And yet, we await our own participation in his glorious resurrection, where we will enjoy the fruits of the heavenly promised land, the fruit of the Tree of Life, that is, eternal life (see Revelation 22)!

Transfigured into His Image

Celebrating the Transfiguration today, we have two choices. We can say to Jesus, “Lord, it is well that we are here” and resign ourselves to a life this side of heaven, a life conformed to this world. Or, we can decide to, “not be conformed to this world, but be transformed [literally transfigured!] by the renewal of your mind,” (Romans 12:2) allowing ourselves to be “changed [literally transfigured!] into his likeness” (2 Corinthians 3:18).

If we wish to participate in Christ’s exodus from sin and death and enjoy the fruits of the heavenly harvest, we must be transfigured into his likeness. We must deny ourselves, pick up our cross, and follow him. For, as Christ tells us:

“whoever would save his life will lose it, and whoever loses his life for my sake will find it” (Matthew 16:25).

Peter literally fulfilled this when he was crucified upside down in Rome for being a follower of Christ. Our Lord may not be calling us to the same kind of death. However, he is calling us to die to ourselves and deny ourselves daily in little ways.

Turn to God in prayer and ask him how he might be calling you to be transfigured. Maybe it’s a kind word he wants you to share with someone you dislike. Or maybe it’s fasting from luxuries so you have some extra money to help those in need. Maybe it’s spending less time in front of a screen and more time with others. Whatever it is, as you journey on your exodus from this life, commit this day to die to yourself and be transfigured into his image.

What are some ways, big or little, you think you can deny yourself and be transformed by Christ today? Let us know in the comments at the bottom of the page.

The Transfiguration: A Spiritual Earthquake that Calls Us to Transformation

The Transfiguration of the Lord ( with Jeff Cavins)