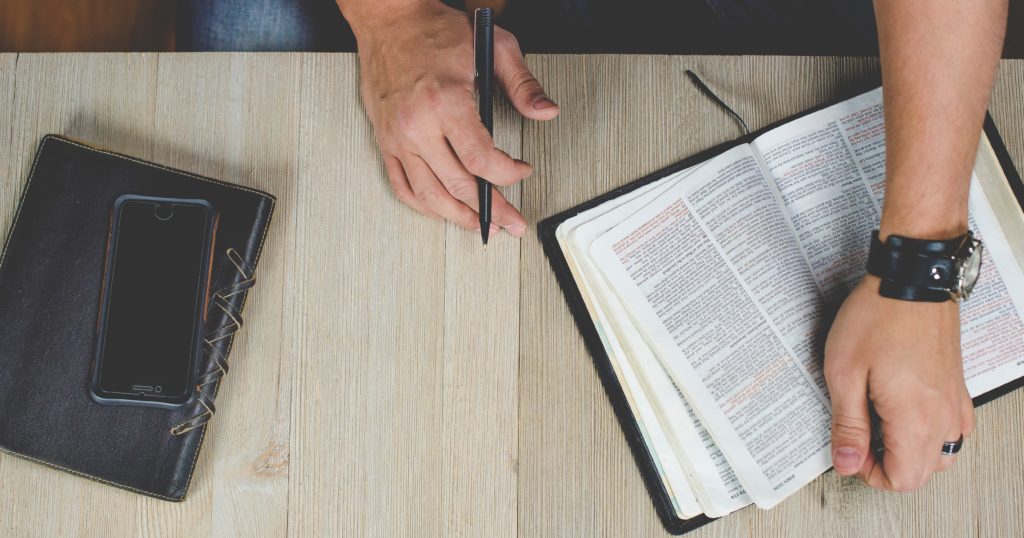 Now in its third edition from Oxford University Press, the Catholic Study Bible is based on the New American Bible Revised Edition (NABRE) English translation of the Bible. The Catholic Study Bible has numerous introductory essays and lengthy introductions to the books of the Bible from several scholars. These highlight the structure, authorship, dating, and historical setting. There are also many helpful essays and charts on a range of topics like Hebrew poetry, the Jewish calendar, and “Purity, Cleanliness, and Ritual.”

The essays tend not to be informed by or oriented toward the Church’s teaching. They are sympathetic to modern critical Scripture scholarship. For example, the introductory essay to the Pentateuch recommends the work of Mark Heim who argues that Israelite religion was a development of Canaanite religion thereby calling into question its revealed status and that monotheism (belief in one God) emerged only after the exilic period.

Another example can be found in the introduction to Mark, which reflects the scholarly skepticism about prophecy when it states: “Most scholars have concluded that the farewell speech known as ‘the little apocalypse’ (Mark 13) reflects some knowledge or even experience of the first Jewish war with Rome (66-74 AD)… Thus, the Gospel was probably written shortly before or after 70 AD … ” This would mean that Jesus did not give the farewell discourse as it is presented but that Mark put words into Jesus’ mouth that reflected realities after his death and ascension.

Because this tends to be a scholarly study Bible that bases its commentary and interpretation more on critical scholarship than on the Tradition of the Church, I would not recommend it for most readers.

At the opposite end of the spectrum is the Catholic Scripture Study Bible (CSSB) which prioritizes fidelity to the Magisterium and is designed for the layperson. It is a joint effort between St. Benedict Press, an imprint of TAN, and Gail Buckley who, after converting to the Catholic Faith from Methodism in 1994, founded Catholic Scripture Study International to help promote parish and personal Bible studies. Available in the Revised Standard Version Second Catholic Edition (RSV2CE), it is very accessible and devotional. It has a topical index as well as lists of Scripture references related to major topics like divorce or the Eucharist. Amidst the Scriptures are discussions of what it terms “Faith Facts” like the Sabbath Day, Lenten traditions in the home, Purgatory, a Catholic response to horoscopes, as well as apologetic answers to common challenges to Catholic doctrine. The aesthetic is traditional, with images from stained glass and baroque flourishes punctuating its pages.

Just released in 2015, the Didache Bible uses the RSV2CE translation of the Bible. It contains a forward from the late Francis Cardinal George and was granted the Nihil Obstat and Imprimatur in 2014.

Each book of the Bible is preceded by a very brief but useful introduction that identifies the author, date of writing, audience, and the main themes. Where the Didache Bible truly excels is in its verse-by-verse commentary that is dependent upon and provides references to the Catechism. In addition to the commentary, there are numerous sidebars with paragraph explanations of key themes or ideas as well as longer “apologetical explanations” of major theological issues like “original sin,” “the formation of conscience,” and “the marks of the Church.” The commentary, sidebars, and explanations facilitate the reading of Scripture within the Magisterium of the Church.

This is very much a student Bible rather than a reading or devotional Bible. The commentarial material is not so much geared toward a greater mastery of the Bible as such, but a mastery of the Church’s teaching on the themes or interpretations of the Scriptural texts. More simply put, the study material helps the reader see the doctrine of the Church related to the text he or she is reading, but doesn’t always help him or her connect the text being read with other biblical texts and themes.

Another student Bible is the Ignatius Catholic Study Bible (ICSB) published by Ignatius Press. It also uses the RSV2CE English translation. The ICSB is the work of Dr. Scott Hahn and Curtis Mitch. It had its origins in little booklets on each book of the Bible that contain introductions, commentary, topical essays, and study questions. In 2010 a very thick one-volume New Testament edition was issued. It is rumored that the Old Testament volume will appear in 2020. Right now, then, you can’t buy a single volume ICSB for the whole Bible.

The ICSB is impressive in its breadth and depth. It is faithful to the Magisterium and judicious in its engagement with biblical scholarship. Major blocks of Scripture (e.g. the Gospels) are introduced with lengthy essays that treat numerous issues in dialogue with both scholarship and Tradition. For example, the essay on the four Gospels examines the authority, canonicity, formation, genre, historicity, and the relationship of the Gospels to each other. Additionally, each book of the Bible in the ICSB has a fair and comprehensive introduction that provides an outline of the book and overviews questions of authorship, dating, original readership, structure, and themes. The treatment of these issues is consistently conservative, but rigorous and reasoned.

Below the Scripture is a running verse-by-verse commentary full of insight and connections to other scriptural or traditional material. These comments are keyed to help readers understand the passage in light of (1) the relationship between Old and New Testaments, (2) the Church’s Tradition, and (3) the analogy of faith. As if this were not enough, there are substantive in-text essays and sidebars that treat a range of issues, like word studies of key terms or treatments of controversial topics like “Is Matthew’s Infancy Narrative Historical?” or “Jesus on Marriage and Divorce.” Finally, the text contains numerous maps, a doctrinal index, and a concordance.

There are two great advantages to the ICSB: First, the integrity and abundance of information, that is at once faithful and informed. Second, its ability to make the reader a master of Sacred Scripture. Anyone who spends time with this study Bible will be a great reader of Scripture. But it does require a big time and intellectual commitment. I wouldn’t think the ICSB would be great for beginners or for devotional reading as one would likely get overwhelmed by the content.

Similar in perspective to the ICSB is the most recent study Bible on the market, The Great Adventure Catholic Bible from Ascension Press, (also available in Spanish!) which also uses the RSV2CE. Granted the Nihil Obstat and Imprimatur in 2018, it is the work of Jeff Cavins, Dr. Mary Healy, Dr. Andrew Swafford, and Dr. Peter Williamson.

Among the many strengths of The Great Adventure Catholic Bible (GACB) is its ability to introduce readers to what the Church has called the divine pedagogy—God’s gradual revelation and enactment of his plan of salvation. The GACB does this by helping readers read Scripture in terms of the major movements and covenants of salvation. The books of the Bible are color-coded to match the widely successful Bible Timeline which divides biblical history into twelve time periods: Early World, Patriarchs, Egypt and Exodus, Desert Wanderings, Conquest and Judges, Royal Kingdom, Divided Kingdom, Exile, Return, Maccabean Revolt, Messianic Fulfillment, and the Church.

Each of these time periods is introduced in the GACB with an informative yet accessible essay that summarizes the events of this period, overviews the biblical content, and discusses key themes. The timeline and essays also note key events and covenants which are explained in call out boxes or other essays. The key events work well in helping readers know where to find those monumental moments of Scripture. In addition to these features, the GACB has a helpful introduction to the GACB itself, an essay on how to read Scripture, an introduction to the practice of lectio divina, and a plan to read the Bible to best grasp salvation history.

One of the challenges of study Bibles is trying not to swamp or bog down the Scripture with so many annotations that end up obfuscating the text itself or distracting from devotional reading. I appreciate that the GACB keeps the text of Scripture mostly undisturbed with minimal intervention. This allows the reader to read and meditate on the text without feeling the pressure of having to investigate every detail all at once. When the reader needs more context, he or she can turn to the aforementioned essays.

Another great feature is the way in which the essays on the time periods or covenants introduce not just the biblical text but Catholic spirituality. Take for example this comment from the essay on the Maccabean Revolt:

“By recognizing their suffering and martyrdom as an offering for the sins of their nation, they [the Maccabees] anticipate the Christian doctrine of redemptive suffering. We can offer our suffering in solidarity with the Cross of Christ for the sake of Christ’s Body, the Church (see Colossians 1:24).”

It’s also worth mentioning that for those who want to delve more deeply into the contents of each individual book, Ascension is providing accompanying studies of the books of the Bible.

The good news is that there are several excellent Catholic study Bibles, each with unique strengths. Protestants are often thought to have the best biblical resources available. But as I hope this survey shows, we Catholics are truly blessed. For those who are pursuing more academic or research oriented study of Scripture, we do await the completion of the Ignatius Catholic Study Bible. But for beginning to intermediate readers of Scripture, who primarily read Scripture devotionally or in parish Bible studies, the Great Adventure Catholic Bible is clearly the best choice.

Free media from Ascension on the Bible

Dr. James R. A. Merrick is lecturer at Franciscan University of Steubenville, reviews editor for Nova et Vetera, and a theology and Latin teacher at St. Joseph’s Catholic Academy in Boalsburg, Pennsylvania. Dr. Merrick is also on the faculty for the Diocese of Altoona-Johnstown’s Lay Ecclesial and Diaconal Formation program. Previously he was scholar-in-residence at the St. Paul Center for Biblical Theology. Before entering the Church with his wife and children, he was an Anglican priest and college theology professor in the United States and in the United Kingdom. Follow Dr. Merrick on Twitter: @JamesRAMerrick.