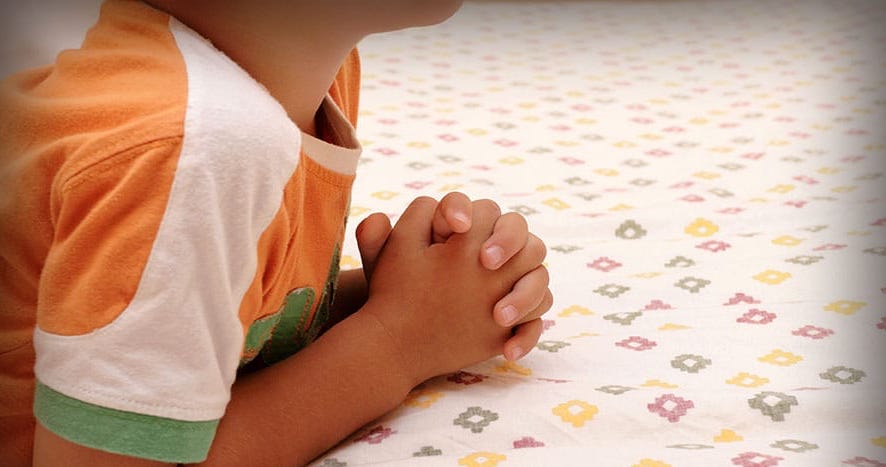 A couple weeks ago, my family gathered for our nightly prayer. I have four kids, all under the age of twelve, and on this particular night, it was Faith’s (my six-year old) turn to lead.

Once everyone was still and squirming had hit a minimum, she began with the Sign of the Cross and said, “Jesus…You rock. Amen.”

In the seconds that followed, the catechist inside of me felt like a failure.

The Holy Spirit quickly returned me to my senses, however, and the soul of this father rejoiced. My little Faith was not “of little faith” — she had actually demonstrated something sorely lacking in many prayers — a true relationship!

What kind of prayer are we modeling for our young people?

In our personal prayer, we’d be wise to remember that God doesn’t grade us on diction.

Words matter little if our intention is pure. Likewise, when leading prayer with our teens or core members (catechists), it is vital to remember that less is often more. Simplicity is a direct route to sanctity.

Remember that scene in Meet the Parents when Robert DeNiro puts Ben Stiller on the spot to lead grace at the family dinner table? Ben Stiller offers a flowery verbal mess, beginning with evocative imagery of cascading fountains and ending with a quote by the recently-heard muzak version of “Day by Day” (from the musical Godspell).

Real-life versions of that scene often play out in youth rooms and parish halls around the world.

No, the scene might not end up as insane and far-fetched as Ben Stiller’s oration, but I’ve watched youth ministers and core team members inadvertently do something very similar when they begin leading prayer with their teens. I’m embarrassed to admit that I even demonstrated it when I started in youth ministry. It wasn’t conscious, but it did happen.

It’s as though when the Sign of the Cross ends, wires get crossed in the leader’s head.

Many times the catechist leading the prayer becomes an English orator from the nineteenth century. Diction becomes elongated, multi-syllable words are slowly and dramatically enunciated, and virtually every word within the Queen’s English is employed to ask God for the simplest of things. Leaders are more apt to “beseech the Sovereign God to sanctify us” than to “ask the Father to help us become more holy.”

If your prayer tongue is poetic, and even flowery, that’s beautiful. Praise God for that gift, but praise him with it at more opportune times. When up front, we’re not only leading prayer. We are modeling it.

How Did Jesus Pray?

Christ could have been far more ethereal in his speech, far more verbose, far more theologically high-minded when he gave us the Our Father.

But he was not.

Jesus was simple in his prayer.

The depth and breadth of God’s majesty and mystery were communicated in simple verses of adoration and petition. The same should be true of our approach. Being a little more intentional about the simplicity with which we pray will not strip group prayer of its Spirit-led glory, it will enhance it. It will empower more core members and teens—some of whom might be shy about praying aloud because they’re afraid they lack the vocabulary or ability to lead.

The simpler, more practical and more direct you can keep your prayer when leading teens, the more powerful the times of silence, praise and worship, intercession, and petition will ultimately become.

Teaching our young people to pray is not merely important—it must be primary.

Prayer is more important than oxygen. Think about it: if you stop breathing, you’ll see Jesus. If you stop praying, who knows who you’ll see?

Don’t allow your youth group settings for prayer to be like the classifieds …where you are paid per word.

It’s not about the words as much as it is about the posture of the heart uttering them.

Ask the Lord to simplify your heart and your prayer will follow. It’s great to pray, “Lord, I offer you praise and glory and thanksgiving for you are the Lord and there is no other.”

But don’t be afraid to look up to heaven, smile and pray, “Jesus … you rock. Amen.”

These resources from Ascension offer an opportunity for you to deepen your prayer life:

Oremus: A Guide to Catholic Prayer

This article was first published on the Ascension Blog’s former home, The Great Adventure Blog (biblestudyforcatholics.com), on April 23, 2014.

How God Answered My Prayer

Mark Hart is the best-selling and award-winning author of more than a dozen books and is the author and lead presenter of The 99: A New System for Evangelization, T3: The Teen Timeline (a teen Bible study program), Encounter (a pre-teen Bible study program), and Altaration: The Mystery of the Mass Revealed. A graduate of the University of Notre Dame, he serves as executive vice president of Life Teen International.