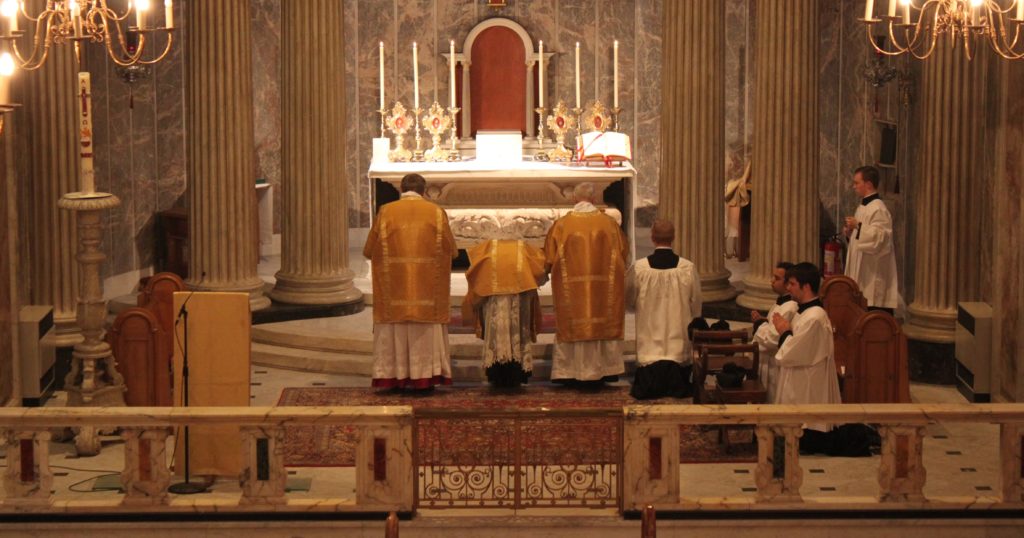 In his 1961 Instructions on Careful Selection And Training of Candidates for the States of Perfection and Sacred Orders, Pope St. John XXIII said simply and explicitly that men with same sex attraction were not suitable candidates for the priesthood.

The Church stated this again in the 2005 document, Instructions Concerning the Criteria for the Discernment of Vocations with regard to Persons with Homosexual Tendencies in view of their Admission to the Seminary and to Holy Orders. This document was begun during St. John Paul II’s Pontificate and published during the Pontificate of Pope Benedict XVI.

In 2016 the Vatican again stated its position on this matter in the document, The Gift of Priestly Vocation, during the pontificate of Pope Francis. In four recent pontificates the subject of same sex attraction in the priesthood and religious life warranted a specific statement and the statements have remained consistent.

The consistent position of the Church here goes beyond protecting the Church from predators and scandal. Gender confusion is at the same time theological, liturgical, and priestly confusion. The issue of same sex attraction in priests is actually an issue of the revelation of truth.

The title of “Father” given to priests is not just a title. It speaks of a reality. If a man is a father he must necessarily be a husband.  The words “father” and “husband” necessarily denote maleness, manhood. If a man has a mature sense of his manhood and therefore his propensity to be father and husband, he will necessarily interface with things as a male, a father, and a husband. This means as a priest-man he will have an intuitive but palpable sense of having a (female) spouse. He will also have a sense of being a father to children, a sense of order, a sense of self-oblation, and a sense of authority and responsibility to defend, protect, and provide.

For the Salvation of Souls

Manhood by its nature functions in a sense of hierarchy, a certain verticality. Manhood is very cognizant of the order of things. A man typically asks who is in charge, where is the pecking order, where things are in relation to who is in charge. Men have a deep sense of honor and of preserving the honor of things that deserve honor. This is most especially the case when it comes to honoring the truth and his bride.

Manhood incarnates the transcendence of God, God’s awesomeness, authority, and mystery. Manhood penetrates mysteries; femininity, the order of creation and the very mystery of the Holy Trinity.

If a priest is a man, and he has a clear senses of his sexual identity as a man, he will by nature approach the Church as his bride. He will live his priesthood in the ways that are intrinsic to authentic manhood. This means he will penetrate the mysteries of truth, theology, and the gospel. He will safeguard them and mystically impregnate his bride—the Church—with those life-giving mysteries. He will speak about these mysteries with authority and demand that his children recognize them and be obedient to the unchanging truths, to their authority and especially to God their author.
Like an authentic man of integrity and a loving father, the male priest will take the hits of being unpopular or misunderstood at times even by his own children as the priest imparts and defends the truth. Offering himself as an oblation so that his children may be saved will be more important to him than whether he is well-liked or understood.

The characteristics of manhood, spiritual husbandhood, and fatherhood were perfectly consistent with and played out in the Liturgies of the Eastern Churches and also in the Pre-Vatican II Liturgy of the Latin Rite Church in its prayer, gesture, ritual, architecture, and art. The orientation of worship faced east, “conversi ad Dominum.” The entire spousal character, which in itself implies a mystical husband-wife dynamic, was contained in the classic architecture and Liturgy of the Church.

However, during the same time when men with same sex-attraction began to populate our seminaries, the altars in churches began to be turned around, “versus populum“. Priest and worshippers now faced one another. The spousal character of the Mass and the revelatory value of the male-man-father-husband priest became obscure. The Mass no longer emphasized the mystical reality made present and incarnate through the -man-husband-father priest (the mystery of Christ Bridegroom with his Bride the Church). Instead, the emphasis became utilitarian, functional—who is doing what at the worship assembly.

A man who does not have a sense of his own authentic maleness, manhood, husbandhood, and fatherhood will likewise not be able to incarnate mystical manhood, husbandhood, fatherhood. He will not know how to embody all of their dimensions in the way he lives his priesthood. He will not know how to relate manhood, husbandhood, and fatherhood to the Church, her theology, and Liturgy.  Such a priests will not rise to defend the authority and order of Truth. He may give nice homilies but they will not impregnate his bride with life. He will be feeble about moral discernment. Most likely, he will be afraid to speak with courage, clarity, and authority from the pulpit about the hot button moral positions of the Church. Without being an authentic man-husband-father-priest, he will not have the courage to give his bride and children what they rightfully deserve—their true Church.

As the Mass Goes, so Goes the Church

A father points the way. He challenges his children to push past pain, fear and complacency, and reach for the next plateau of their divinization. He challenges them to become the best versions of themselves. Without an intuitive sense of being a father, a priest may work toward making everyone feel good and included. But he will not challenge them to truly stretch and grow beyond their comfort levels. In a word, without the intuitive sense of fatherhood, a father will not really call his children to the one thing that as a father he is duty-bound to call them—holiness.

In his book, Spirit of the Liturgy, Cardinal Joseph Ratzinger (later Pope Benedict XVI) reminds us that there was never an historical precedence in the Church for worship where the priest and people faced each other throughout the celebration.

The return of the priesthood to men who are sexually mature must coincide with the return of the Liturgy to its authentic spousal character, the proper ad orientum orientation. This is not a question of conservative versus liberal. It’s not going backwards. Nor is it simple nostalgia for the “Latin Mass” and the “good old days” of the Church. Pope Benedict the XVI reminded us that if all goes properly at the altar, all goes well in the rest of the Church. If things go wrong at the altar, in the Liturgy of the Church, things go wrong in the rest of the Church.

A Vision for Life

The whole world of human sexuality (maleness and femaleness) finds its mystical context in the proper Liturgy of the Church. In the Liturgy is where the Bridegroom Christ comes to consummate a mystical marriage with his Bride, the Church, on the nuptial bed of the altar in the Eucharist. The restoration of the priesthood to authentic maleness in all of its mystical dimensions must coincide with a restoration of proper Liturgy and all of its proper dimensions.

Yes, we must heal the Church of predators and scandalous behavior. But then what? The bad tumor could just grow back again unless, as Church, we rediscover the mystical meaning of the priesthood in the context of the authentic Liturgy of the Church. Liturgy and the Eucharist are not something we just attend or look at. They are the lens through which we see all things. It is in Liturgy that we are given the proper vision for all of life, most especially the priesthood.

Manhood, Priesthood, and Liturgy: Solution for the Sex Abuse Crisis

Fr. Thomas J. Loya, STB, is the pastor of Annunciation of the Mother of God Byzantine Catholic Church in Homer Glen, Illinois. Fr. Loya, who has a master’s degree in counseling and human services, is a regular guest speaker on several Catholic radio programs. His long running radio program “Light of the East Radio”—which can be heard on EWTN Radio affiliates across the United States—shares the beauty of the Eastern Catholic Churches. Using his many gifts, talents, and life experience he strives to uncover the ageless beauty and genius of the sacramental worldview with the soul of an artist, the mind of a theologian, and the compassion of an ascetic.