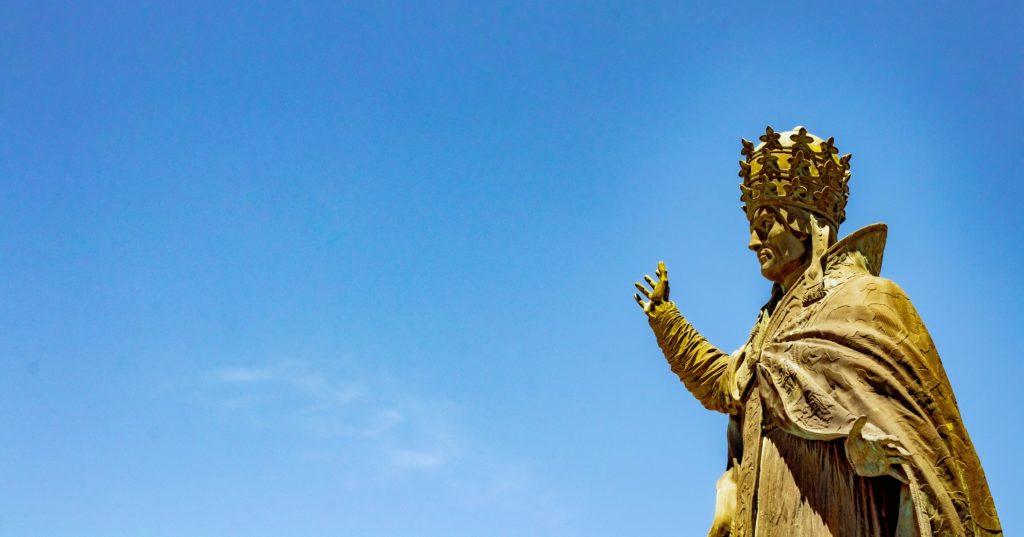 Did Jesus found a Church? Did he envision anything like a pope or bishops and the like?

Here we continue our series on answering common objections. (See the earlier articles on Mary and the Communion of Saints, and our new study, Romans: The Gospel of Salvation for more explanations of Church teachings.)

The key is seeing the New Testament in light of the Old (and reading the Old in light of the New). While Jesus is captivating and mesmerizing in his own right, he clearly sees himself as bringing about the fulfillment of Israel’s story (which itself embodies humanity’s story). Jesus’ words and actions are always enriched when understood in their fuller Old Testament and Jewish context.

Jesus, Peter, and the Keys

Many can locate the classic Catholic passage on the papacy (Matthew 16:13-19). This is where Jesus gives Peter the “keys of the kingdom” and the authority to “bind and loose.” Too often, however, this passage is simply explained with reference to generic symbols of authority—like “keys” and “binding and loosing.” This is true, but even more significant is the fact that these are Davidic symbols of authority.

In other words, Jesus is the long-awaited Davidic King (see Luke 1:32-33). The “Kingdom of God” he proclaims is the Davidic Kingdom restored and elevated; and as we’ll see, Peter’s new role is foreshadowed by a specifically Davidic office.

This office is clearly in the back of Jesus’ mind as he speaks to Peter. Many exegetes—including Protestant scholars—see the following passage from Isaiah as directly in the background of Jesus’ words. Here Isaiah describes the transition from one al bayit (Shebna) to another (Eliakim):

“Thus says the Lord God of hosts, ‘Come, go to this steward, to Shebna, who is over the household [al bayit], and say to him … Behold, the Lord will hurl you away violently …. I will thrust you from your office, and you will be cast down from your station. In that day I will call my servant Eliakim … and clothe him with your robe, and will bind your belt on him, and will commit your authority to his hand; and he shall be a father to the inhabitants of Jerusalem and to the house of Judah. And I will place on his shoulder the key of the house of David [see “keys of the kingdom”]; he shall open, and none shall shut; and he shall shut, and none shall open [see “binding and loosing”]. And I will fasten him like a peg in a sure place, and he will become a throne of honor …” (Isaiah 22:15-23).

Head of the Apostles

Hence, Jesus’ giving Peter the “keys of the kingdom” and the authority to “bind and loose” refer back to Isaiah’s description of this office. Peter, the new al bayit, will govern in Jesus’ name after he departs in the Resurrection and Ascension (or better: Jesus will govern through Peter and his successors after his ascension).

The phrase “binding and loosing” refers to the authority to teach, govern, and forgive sins (see Catechism of the Catholic Church 553). Jesus gives all the apostles authority (see Matthew 18:18); but he gives the keys only to Peter. That is, all the apostles have this authority, but it is exercised in union with Peter as their head.

It’s also worth noting that Scripture uses the phrase al bayit to describe the patriarch Joseph’s role as second in command to pharaoh (Genesis 41:40).

In Matthew 16:18, Jesus also changes Simon’s name to “Peter”. Just this name change alone would be enough to know that Jesus is setting Peter apart for a special mission. Generally, when God directly changes someone’s name it is because he is setting them apart for some unique role in salvation history. And often the meaning of the new name is evocative of the new mission. For example, God changes Abram’s name (which means “exalted father”) to “Abraham” (which means “father of a multitude,” Genesis 17:5). The name change is clearly indicative of Abraham’s new calling. He is calling Abraham to be a father of an international family of faith, not just a particular tribe.

So, too, changing Simon’s name to “Peter” is extremely significant. Again, even if the text stopped here—making no mention of Jesus giving Peter the “keys” or the authority to “bind and loose”—we would have enough to know that Jesus is setting Peter apart for a unique mission. And as with Abraham, the meaning of Simon’s new name is significant as well.

“Peter” means rock and appears not to have been a proper name before this—making the symbolism all the more apparent. Jesus is speaking of Peter and his role as the new foundation stone of the new Temple. Jesus’ risen body is the New Temple (see John 2:19-21); but the Church, as the Mystical Body of Christ, is also the New Temple—the dwelling place of God (especially manifest in the Holy Eucharist).

There are interesting Jewish traditions that may shed even more light on this language and Peter’s role. The Temple for the ancient Jews was the meeting place of heaven and earth. And the foundation stone (the eben shetiyah) was thought to “plug up” the abyss to the nether world—keeping the demonic forces at bay.

Jesus may be utilizing this Jewish background, as he describes Peter as the new foundation stone of the New Temple (“You are Peter [i.e. Rock] and on this rock I will build my Church,” Matthew 16:18): Peter, in his capacity to bind and loose, will perform a function like unto the foundation stone of old—keeping the demonic forces at bay in the New Covenant.

Other Passages of Note

Peter’s role and its foundation for the papacy is not limited to this passage in Matthew 16. In fact, Peter heads every listing of the apostles, with Judas always last—this is certainly not an accident (for examples, see Matthew 10:2-4; Mark 3:16-19; Luke 6:14; Acts 1:13). In fact, taking all four Gospels and Acts of the Apostles together, Peter’s name is found 179 times—more than the references to all the other apostles combined (the next most frequently occurring apostle is John at thirty times).

In Luke’s Gospel, Jesus prays for Simon Peter individually—that he may be able to strengthen his brother apostles:

Peter’s Role in John and Acts

In the Acts of the Apostles, Peter’s headship of the Church emerges very clearly. He takes the lead role in guiding the Church in replacing Judas’ apostolic office with Matthias (see Acts 1:15-26); Peter gives the opening sermon at Pentecost (see Acts 2:14-36); and Peter speaks authoritatively at the Council of Jerusalem (see Acts 15:7-12). In fact, Scripture often refers to the apostles as “Peter and the rest of the apostles” (see Acts 2:37).

In other words, the primacy of Peter is embedded in the witness of the New Covenant Church—it is not isolated to a single passage.

Often, as we noted, with the passage in Matthew 16:13-19, Protestant scholars will follow with regard to the Davidic background of the passage and the allusion specifically to Isaiah 22 (cited above). In other words, they will acknowledge that Jesus is holding up Peter in the role of al bayit, but they will insist that this promise is for Peter and Peter alone; in other words, they will insist that this passage says nothing about succession.

The answer, however, is relatively straightforward. The “keys” refer to an office; and the office lasts as long as the kingdom lasts. That is, Jesus is establishing an office, beginning with Peter—but an office always transcends the person occupying it (as the “presidency” transcends the particular person governing as president).

This office beginning with Peter lasts as long as the kingdom lasts—that is, for the duration of the Church’s life on earth, since the Church is the kingdom of God on earth, the Davidic Kingdom restored and elevated). In other words, succession is built into the imagery of the keys.

Can We Trust This?

We trust Jesus, and we trust him to write straight with our crooked lines. We trust the pope and the bishops collectively (and their teachings, for example, in Church Councils and the Catechism) because we trust Jesus. Just as the Holy Spirit worked through fallible and sinful men to write the Gospels, he can do the same to guide the Church. Jesus promises always to be with us (Matthew 28:20) and that the gates of hell will never prevail against his Church (Matthew 16:18). Indeed, Jesus will never abandon his bride (see Ephesians 5:25-32).

With Us to the End of the Age

Popes aren’t always saints; and they don’t always do and say the right things at the right times. But through the power of the Holy Spirit, he promises to keep the Church from formally teaching error on faith and morals on behalf of the universal Church. This promise and this gift of the papacy is the ultimate guarantee of the unity of the Church—as St. Paul taught, there is “one Lord, one faith, one baptism” (Ephesians 4:5). The gift of the Holy Father doesn’t restrict our freedom; it liberates us to swim more deeply in the truth and life God so graciously wished to give us in Christ Jesus.

How can we enter more deeply into the gift of the papacy?

Everyone Needs a Papa – The Biblical Basis for the Papacy (podcast)

Featured photo by DDP on Unsplash