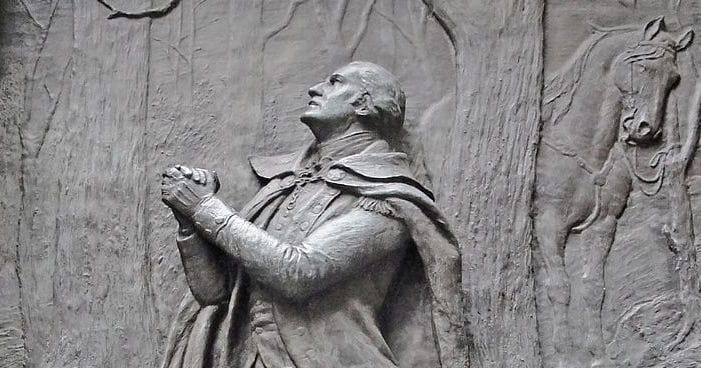 In these times, we as Americans can gain perspective from the lessons of the history of the Children of Israel.

For seventy years, the house of Judah languished in exile before returning to the ruins of the Temple and the city of Jerusalem. The holy men of that time looked back over salvation history to discern what went wrong. After the exile, sacred writers compiled the history so the people would never again forget where they had come from. They organized the history ever mindful of the sins of the nation and God’s judgment over them. 2 Kings 23:32 seems to instantiate a pattern of the history of the rulers of Judah and of Israel:

“He did what was evil in the LORD’s sight, just as his ancestors had done.”

A Nation to Worship God

The fortunes of nations, and even of God’s chosen people, rise and fall, but God is always enthroned above. Thus the compiler of Book IV of the Psalms, which is replete with psalms about exile, placed the only psalm attributed to Moses at its fore:

“Lord, thou hast been our dwelling place
in all generations.
Before the mountains were brought forth,
or ever thou hadst formed the earth and the world,
from everlasting to everlasting thou art God.” (Psalm 90:1-2).

God had formed the Hebrew people into a nation through Moses. The purpose for their freedom as a nation was to worship the Lord and serve Him. We read in Exodus that this is what Moses was to declare to Pharaoh:

But what did the people do with their freedom in the desert? They grumbled against the Lord and worshiped the Golden Calf. They wanted a god like the gods of all the other nations, visible and controllable.

From the time of their entry into the Promised Land, God gave his people judges who had a close relationship with him to rule over them. But eventually the people insisted on a new form of government—one like all the other nations. According to the Navarre Bible commentary:

“The real danger is that the people, by choosing a king and swearing allegiance to him, will be excluding God from the picture… the main danger posed by having a monarchy will be a tendency to solve military, political and social problems without reference to God or even in contravention of his Law” (Joshua-Kings, 236-237).

George Washington saw the American fight for independence in light of what God had done for the Children of Israel. He writes in a prayer:

“May the same wonder-working Deity, who long since delivered the Hebrews from their Egyptian oppressors, planted them in a promised land, whose providential agency has lately been conspicuous in establishing these United States as an independent nation, still continue to water them with the dews of Heaven and make the inhabitants of every denomination participate in the temporal and spiritual blessings of the people whose God is Jehovah” (quoted in The Spiritual Journey of George Washington by Janice T. Connell, 101-102).

For Washington, Americans were a people of God and were guided by providence. Thus the freedoms of conscience and of the practice of religion—not merely of worship—were among the highest responsibilities of government.

Exiles in Our Own Land

The separation of church and state ensured by the Constitution for the protection of religion has been used increasingly in recent years to mean that there is “a wall between one’s faith and one’s political decisions,” as Cardinal Timothy Dolan puts it. He quipped on Face the Nation that the notion “that faith has no place in the public square… is a misinterpretation… [of] what the American genius is all about” (4/8/12). He further remarked that America is at its best when citizens’ actions are inspired by their faith and its moral teachings.

If we forget who we are as a nation and abandon our roots, we lose this American genius. As Christians with the realization of this loss of national consciousness, we feel like exiles in our own land. But what we can never lose is the sovereignty of God.

In what ways can we remind people of the religious roots of the U.S. and America’s ties with the God of Israel? Please share your thoughts below.

The Love and Doubt of Thomas

Michael J. Ruszala is the author of several religious books, including Lives of the Saints: Volume I and Who Created God? A Teacher’s Guidebook for Answering Children’s Tough Questions about God. He holds a master of arts degree in theology & Christian ministry from Franciscan University of Steubenville. He has served for a number of years as a parish director of religious education, parish music director in the Diocese of Buffalo, and adjunct lecturer in religious studies at Niagara University in Lewiston, NY. For more information about Michael and his books, visit michaeljruszala.com.