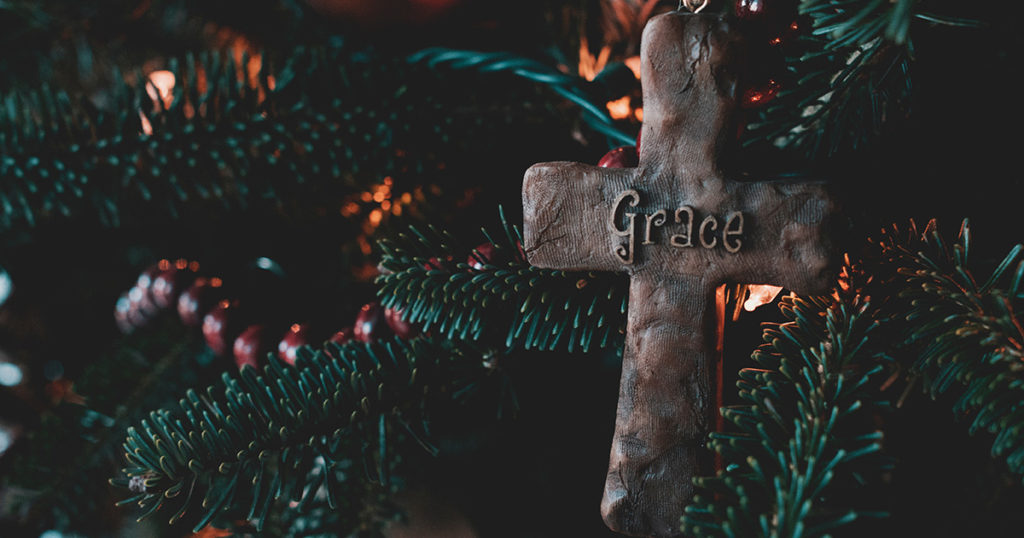 You’ve probably seen it already. Your neighbors no longer have lights twinkling outside their houses. Large trees are strewn across front lawns in preparation for garbage day. The radio station that had been playing Christmas music twenty-four hours a day since November 1 suddenly stopped playing all their carols at 12:01 AM on December 26.

We have entered the end of the Christmas season … or so thinks the world. I walked into a hardware store on December 27, and I heard “Joy to the World” playing over the loudspeakers. I was glad to hear that some place was still celebrating Christmas. But then a regular Scrooge who worked there commented to her co-worker, “Christmas is over! Why don’t we turn off this silly music?”

Christmas is over for the secular world, but not for the Christian. Even now that Little Christmas (The Epiphany is over), we still have a week of Christmas left! The Christmas Season, according to the Church’s liturgical calendar, doesn’t end until the Baptism of Our Lord on January 13.

Even after those days are over with, Christmas still continues. If you don’t want Christmas to end, you’ve found good company with the Church. Below are four ways that Catholics can continue to celebrate Christmas after the New Year, just as the Church directs us to.

1. Don’t Throw Away Your Christmas Tree Just Yet

As I mentioned above, you’ve probably seen many of your neighbors already taking out their Christmas trees. It’s odd to think that just a generation or two ago, many people in North America didn’t even put up their trees and decorate them until Christmas Eve. Christians understood that the days leading up to Christmas were in preparation for the holy day. We were more keenly aware of the season of Advent then. Some would start decorating the tree on Gaudete Sunday, the Third Sunday of Advent, which would be quite fitting. But when people start putting up their tree before Thanksgiving, there’s no reason to even bother keeping the tree up past December 25t. Not to mention that if you have a real tree, you probably have needles all over the floor since the tree has been up for well over a month.

But there’s a reason why we as Christians have the Christmas tree in our house. While the tree has certain German origins, it represents various Christian truths. The star at the top of the tree represents the light of Christ illuminating the entire world, and various ornaments are signs of our Lord’s grace upon us. But even Scripture has good things to say about the Christmas tree, in a certain sense:

Say among the nations, “The Lord reigns!
Yea, the world is established, it shall never be moved;
he will judge the peoples with equity.”
Let the heavens be glad, and let the earth rejoice;
let the sea roar, and all that fills it;
let the field exult, and everything in it!
Then shall all the trees of the wood sing for joy
before the Lord, for he comes,
for he comes to judge the earth.
He will judge the world with righteousness,
and the peoples with his truth.

Even the tree itself speaks to the coming of Christ. It always brings great joy when one lights up a Christmas tree. It’s almost inexplicable. At a Christmas tree lighting in 2014, Pope Francis made an important observation:

We can allow our Christmas tree, seen from the streets in our windows, to bring the light of Jesus to others. But that prompts the question: how long should one keep their Christmas tree up?

Typically, at least in the Latin Rite, the Christmas Season wraps up not on Epiphany, but on the Feast of the Baptism of the Lord. This feast takes place, typically a week after the Epiphany. That means that the length of the official Christmas Season can range from sixteen to as many as twenty days.

In 2019, the Baptism of the Lord falls on Sunday, January 13, the latest that this feast can fall on. But more than a few people contend that Christmas actually goes even further than that, and many a debate has sprung from such a notion. For those that can’t get enough of Christmas, the season can extend all the way into February. If you needed an excuse to keep the Christmas tree up through January, you now have one.

But just what is the significance of Candlemas Day? Many of us know this day as the Feast of the Presentation of the Lord, and less commonly as the Purification of the Blessed Virgin Mary. Forty days after Jesus’ birth, He was presented at the temple, according to the Mosaic Law. Also being obedient to the law, Our Lady underwent the purification rite.

Both of these events follow what was spelled out in Leviticus 12:1-8. But what some people have pointed out is that the forty days between Christ’s birth and his presentation is related in some way to the forty days of the Easter Season. Indeed, many of the older liturgical books prior to the 1969 Missal of Pope St. Paul VI (what we now know as the Ordinary Form) labeled the days of Advent up until Septuagesima as the “Christmas Cycle”, and the rest of the days of the year as the “Easter Cycle”, as can be seen here. Of course, the Easter season certainly trumps the Christmas season in terms of importance and solemnity, but it’s interesting to see how the liturgical calendar has evolved over the centuries.

3. Pray the Liturgy of the Hours Regularly

Now this should be something that happens all throughout the year, but praying the Liturgy of the Hours during this time of year does offer us a bit of extra Christmas “flavor”. Compline or “night prayer” has always been a favorite prayer of mine, as it’s the perfect way to end the day with a brief examination of conscience. At the very end, however, we sing one of four Marian antiphons depending on the time of year.  Beginning on the first Sunday of Advent, we recite The Alma Redemptoris Mater (O Loving Mother of Our Redeemer). When is the last day we recite this antiphon? You probably guessed it. February 2n, for Candlemas Day.

The prayer sings the praises of Mary, the one “who brought forth thy holy Creator”, which reminds us of our Lord’s birth in a lowly manger. It’s yet another way to carry on the Christmas Season well past New Year’s Day. But ideally, we can use this opportunity to form a good habit. If we haven’t been praying the Liturgy of the Hours regularly, we can start now in our hopes to keep the spirit of Christmas going. Then, once February 2n has passed, we can continue on in this wonderful prayer. The Catechism of the Catholic Church has the following to say on the Liturgy of the Hours:

“The Liturgy of the Hours is intended to become the prayer of the whole People of God. In it Christ himself ‘continues his priestly work through his Church.’ His members participate according to their own place in the Church and the circumstances of their lives.… The laity, too, are encouraged to recite the divine office, either with the priests, or among themselves, or even individually.”

I’m sure that at the very end of the year, you received many emails and letters from a swath of charitable organizations, asking that you make one last donation before then end of the year for tax purposes. At this time of year, we are already predisposed into being generous with our talents and treasures, and we see many people making monetary gifts to many different charities. This should certainly be commended. But why do we have to stop after December?

We know that almsgiving is something that our Lord directs us to do, and the Church doesn’t relegate this action just to penitential seasons. If we had the ability to make the season bright for our less fortunate brothers and sisters immediately before Christmas Day, then we should try to find that same generosity immediately after. This might mean we don’t go absolutely crazy with the gifts for family and friends on Christmas Day, but those in need require our assistance just as much now as they did then. It’s absolutely something to prayerfully consider as we try to extend the Christmas season.

As can be seen, there are several ways to lengthen this holy season of Christmas throughout our daily lives. Our extension of the season can serve as a light to our secular friends and peers. Pope Benedict XVI put it beautifully in a general audience he gave back in 2008:

“Because of the atmosphere that distinguishes it, Christmas is a universal celebration. In fact, even those who do not profess themselves to be believers can perceive in this annual Christian event something extraordinary and transcendent, something intimate that speaks to the heart…

“At Christmas, therefore, we do not limit ourselves to commemorating the birth of a great figure: we do not simply and abstractly celebrate the birth of the man or in general the mystery of life; even less do we celebrate only the beginning of the new season. At Christmas we commemorate something very tangible and important for mankind, something essential for the Christian faith, a truth that St John sums up in these few words: ‘The Word became flesh.’”

In turn, let us not allow ourselves to put a limit on the Christmas celebration. It didn’t end on December 26, and it’s not over today. We can even continue it beyond February 2 if we allow ourselves to acquire some new, good habits.

This is truly the beauty of our Catholic Faith. We cannot confine the joy of Christmas to one day. When a single moment has the ability to change the course of human history, we can’t blame ourselves for wanting to commemorate that event for a long period of time. Feel free to keep on giving those you encounter a hearty “Merry Christmas!”

Christmas is a Season!

Why Was Christ Baptized?

The Christmas Tree Doesn’t Fall ‘Til It’s Over

Nicholas is a cradle Catholic and hopes to give a unique perspective on life in the Church as a millennial. His favorite saints include his patron St. Nicholas, St. Ignatius of Loyola, St. Thomas Aquinas, St. John Mary Vianney and St. Athanasius of Alexandria.

It's the National Day of Prayer, Not of Thoughts and Positive Vibes
Weekly Roundup of Ascension's New Free Content
Abortion Vote in Ireland Betrays Nation's Heritage
The Sacramentality and Indissolubility of Marriage
Has Ascension's free media strengthened your faith?
You can now offer ongoing support for this content with a recurring gift.
Support Ascension