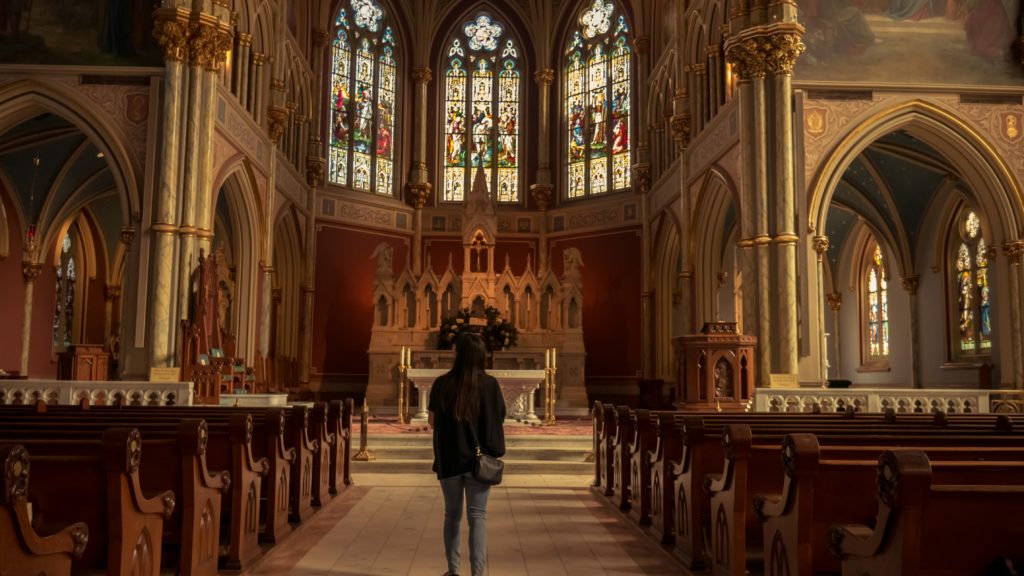 Many Catholics understand that the Eucharistic sacrifice of the Mass is the summit of Christian life. Without the Eucharist, we cannot live. Our Lord Jesus said as much, as we’ve just recently heard over the last few weeks during the Gospel readings at Mass in the Bread of Life discourse.

Since the Eucharist, the very Body and Blood of our Lord, is confected only during the Holy Sacrifice of the Mass, it’s no small exaggeration to say that the Mass is the greatest prayer we could ever offer. It’s a participation in that same sacrifice, made present again on our altars, which Jesus made for all of humanity in order to atone for the sins that we could not possibly atone for by ourselves.

In the Name of the Father

However, many of our friends, family, and peers (be they non-Catholic or Catholic to some degree) do not understand what takes place during the Mass. We also have to recognize that some haven’t even taken that first step yet and that some of our loved ones don’t yet know Jesus himself in a real way.

As Christians we are called to evangelize. Since the Eucharist and its celebration is the “source and summit” of the Christian life, can we use the beauty of the Holy Mass to evangelize? Since we should be using every method at our disposal to bring people into the embrace of Christ and his bride, the Church, let’s explore that possibility.

Now at the outset, we should acknowledge that there are four main ends of the Holy Mass. Those ends are adoration, atonement, thanksgiving, and petition. “Adoration” is always listed first because the principal purpose of the Mass is to offer worship to God. This is what we owe to God in justice, and we offer this worship and adoration because we love God as our Father.

The Communion of Mankind

But outside of these four principal ends of the Mass, there are certainly other ways in which the Mass can be effective, and one of those is evangelization. The Mass is certainly for the faithful, and this is why we call it the “source and summit” and not the beginning of a Christian’s journey. But we should not be afraid to let the beauty of the Mass penetrate the hearts and souls of those who want to learn more about the Catholic Faith and are not fully integrated into the Church yet. Again, while not the primary focus of the Mass, one can certainly use the Mass itself in a repertoire of tools to evangelize. We must consider the words of the Catechism of the Catholic Church:

“Lay people also fulfill their prophetic mission by evangelization, ‘that is, the proclamation of Christ by word and the testimony of life’” (CCC 905).

Simply being at Mass and worshipping there, actually participating in the Holy Sacrifice, is a testimony. It’s a testimony to our faith in Jesus Christ, and it can certainly show others that we take that faith seriously. Inviting a friend to Mass in this case can certainly be something that touches the heart.
Pope St. John Paul II also briefly shared his wisdom on the topic in his 2003 encyclical, Ecclesia de Eucharistia:

From the perpetuation of the sacrifice of the Cross and her communion with the body and blood of Christ in the Eucharist, the Church draws the spiritual power needed to carry out her mission. The Eucharist thus appears as both the source and the summit of all evangelization, since its goal is the communion of mankind with Christ and in him with the Father and the Holy Spirit” (EE 22).

Starting at the Source

St. John Paul II makes it clear that the Eucharist is not only the summit of Christian life, but it is its source too. An encounter with our Lord in the Eucharist can move us as Catholics to evangelize to our peers.

“I had never gone to Mass before. I slipped in. I sat down in the back pew. I didn’t kneel. I didn’t genuflect, I wouldn’t stand. I was an observer; I was there to watch…

I watched and listened as the priest pronounced the words of consecration and elevated the host. And I confess, the last drop of doubt drained away at that moment. I looked and said, ‘My Lord and my God.’…

And as soon as it began, it was over. People stuck around for a minute or two for thanksgiving and then left. And eventually, I just walked out and wondered, what have I done? But the next day I was back, and the next, and the next… [I]n two or three weeks I was hooked. I was head over heels in love with Christ and His Real Presence in the Blessed Sacrament. It became the source and the summit and the climax of each day…”

That testimony should give us great hope. Conversion of heart can happen through the Holy Mass. But not everyone has the scriptural or theological background as Dr. Hahn! How can we as ordinary Catholics reach our friends through the Mass in a winsome way? There’s a few steps we can try.

1. Invite Them to Your Home First

First, invite your friends into the life of the Church. Notice I didn’t say “invite them to Mass” explicitly. Here’s why.

A priest I know of once said that too many parishes put that they are “welcoming” in their mission statements, but not enough put that they are an “inviting” parish. He made it clear that we shouldn’t just be inviting our non-Catholic and lapsed Catholic friends to Mass, but that we should first invite them into our homes, into our circle of friends, and love them because they are made in the image of God. After we build that groundwork for a bit, then we should certainly invite them to Mass. But not just any Mass. Make sure it’s a Mass that is reverent and awe-inspiring. Of course it goes without saying that the Mass should always elicit awe and wonder, but sadly many liturgists in North America have what’s sometimes referred to as “tinker-itis”, and it’s a reality that some Masses in our parishes are rushed or minimalistic. The type of Mass that Dr. Hahn talks about is perfect. It doesn’t even have to be a Sunday Mass; a daily Mass works too.

2. Invite Them to Mass as Friends

Second, make sure you go with your friends! If they already have a Christian background, spend some time telling them about the various parts of the Mass. Those that have a love for the Bible will surely appreciate it if you tell them about the various ways that Scripture ties into the Mass. Let them know what to expect beforehand, and of course, be ready to answer any questions they might have. This means you may have to study up! You can’t teach what you don’t know. (Dr. Edward Sri’s book, A Biblical Walk through the Mass outlines the many connections between the Bible and the Mass.)

3.  Be at Mass Spiritually

Third, make sure you leave some breathing room. If you’re at Mass with your friend or acquaintance, allow them to enter into the prayer that is the Mass. It’s the same principle we should take at any time we are trying to evangelize. During that quiet time of the Eucharistic Prayer, show your friend by your body language and your own devotion that something truly life changing is happening. As was mentioned above, just being at Mass can be a testimony. If your friend sees how you act during the Mass, they should be able to see that your participation reflects the love you have for our Lord. Your posture and demeanor should reflect that there is something great happening.

4. Invite Them to Know Jesus Personally

Fourth and finally, as I’ve made clear recently, we must not be afraid to evangelize! We must invite others into full communion with our Lord Jesus. We must invite those that don’t even know Jesus to come to him. The Mass is a means of conversion in the sense that its beauty has softened the hearts of so many. When the soldiers of St. Vladimir of Kiev entered Hagia Sophia for the first time during Divine Liturgy, the men wrote back that they did not know whether they were on heaven or earth. And that is because the Mass is a taste of heaven. It is literally heaven on earth! How could we not want to share that with people?! All of these steps require us to get out of our comfort zones. If we admit that souls are on the line, and that evangelization is necessary so that all the world will hear the gospel message, then we must consider extending invitations to others. Not only to Mass, but into the entirety of Christian life.

A Form of Permanent Evangelization

It’s important that we realize that the Eucharistic celebration is the center of our Faith, and the Holy Mass’ connection to evangelization cannot be understated. In a little known address by Cardinal Joseph Ratzinger, he notices this connection as well. He calls the Eucharist something different from what we usually hear. He calls it “permanent evangelization”:

“The Church always evangelizes and has never interrupted the path of evangelization. She celebrates the Eucharistic mystery every day, administers the sacraments, proclaims the word of life—the Word of God, and commits herself to the causes of justice and charity. And this evangelization bears fruit: It gives light and joy, it gives the path of life to many people; many others live, often unknowingly, of the light and the warmth that radiate from this permanent evangelization.”

He lists several actions in his first sentence, and one of those actions is the celebration of the Eucharistic mystery, which only takes place in the context of the Holy Mass. We would all do well to engage others with this form of “permanent evangelization”.

Photo by David Besh from Pexels.

The Catholic Eucharist in the Bible
Missing Mass and More on the Nature of Sin
Why Did God Ask Abraham to Sacrifice Isaac?