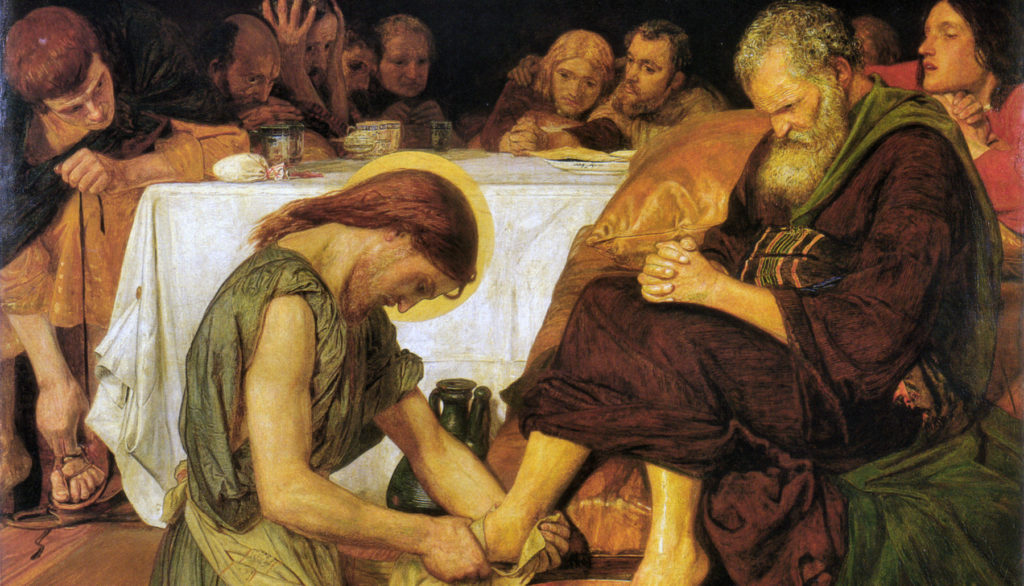 I see him every Sunday at Mass, he and his wife. There’s nothing in particular, physically, to commend him. A senior of rather small stature, he sings in the choir, but is otherwise inconspicuous. 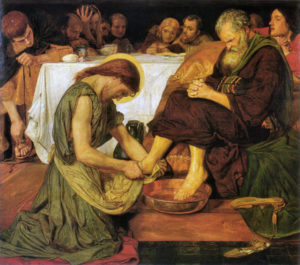 If it weren’t for one marvelous thing, one would hardly notice him at all. Characteristic of saints, I hear.

The day I noticed him was a typical Sunday. In my RCIA class, I presented the brazen, horned altar and the laver, the first two pieces of equipment one encountered upon entrance to the outer court of the Old Testament tabernacle.

The Brazen Altar and Laver

We found that the brass used to craft the altar was indicative of judgment, illustrating the altar’s function as the place where bloody animal sacrifices were offered every day. The altar taught the people that every sin has a price and requires blood for atonement (Leviticus 17:11).

I explained that the horns on the altar were symbolic of authority in the Scriptures, so that spiritual authority lies in sacrifice (Revelation 5:6); how Catholic altars include a cross engraved or carved into each corner, “cornu” in Latin, meaning horn; and that the Church Fathers understood Jesus to be foreshadowed in both the Old Testament tabernacle altar and sacrifices.

That morning we also probed the laver, the second article in the outer court, and its strategic position, so that the priests were to wash serving hands and gospel feet in this water, after offering sacrifices, but before entering the sanctuary in which the Lord presided.

I explained how consistently this principle is carried forth into Catholic churches where the baptismal font is the first thing one encounters upon entering the sanctuary after a week of sacrifice, just before we enter the holy place to commune with God, and how we memorialize our baptism by making the Sign of the Cross after dipping our hands into the baptismal waters.

We learned that the tabernacle laver was filled with water from the thirst-quenching rock that followed them throughout the wilderness, a Rock that St. Paul, in his letter to the Romans, proclaims was Christ (1 Corinthians 10:4), so that Jesus was, and is, from whence the water and the cleansing proceeds.

I remarked that the baptismal font, the Catholic laver, is positioned in the church where Jesus’ feet would be, and his head at the altar, if one were to imagine the church laid out architecturally like a cross, as most ancient churches were in echo of the cruciform layout of the tabernacle.

I showed them the two places in the New Testament in which the word “laver” is used, one of which is particularly significant to the mysterious man I notice every Sunday at Mass:

“Husbands, love your wives, as Christ loved the church and gave himself up for her, that he might sanctify her, having cleansed her by the washing [laver] of water with the word, that he might present the church to himself in splendor, without spot or wrinkle or any such thing, that she might be holy and without blemish” (Ephesians 5:25-27, emphasis added).

In an effort to tie these loose tabernacle ends together, the altar and laver, at the end of class, we turned to John 13, and watched as Jesus, on the eve of his terrifying, supreme sacrifice, donned an Old Testament priestly girdle of sacrificial service (Exodus 39:29). Girded with a towel, he lavered, or washed, the feet of his disciples, showing them into what baptism they were being “baptized.”

It is the same baptism into which we are all baptized, that of pure, loving sacrifice, even to death, on the altar of Christ; it is our spiritual authority and what makes the Church a kingdom of priests, ordained and lay.

A Body Is for Sacrifice

It was with all this from our class floating about in my head that I headed to Mass that morning. I noticed him in his place at the back “cornu” of the church where the choir sings; his wife was seated beside him in a wheelchair.

She wore big earrings, bold makeup, and a somewhat fixed stare. I watched him speak softly to her and caress her face as he found the entrance music in the missal and gently fixed her stiff fingers around it before resting it in her lap. He patted her hands.

He performs this assistance for her throughout every Mass, between singing with the choir. As always, he was gentle as he sang that morning, leaning over her as though he sang for her too. He replaced her missal and took a seat beside her against the back wall of the church.

At Communion, I saw him struggle to fit the wheelchair between the organ and the aisle; the short way was blocked by oncoming communicants, so he carefully navigated all the way around the back of the pews and down the center aisle so she could receive Communion.

A year ago, just after he retired, his wife fell down a flight of stairs and sustained a severe brain injury. While she recovers arduously, the difficulties involved in caring for one who is disabled or handicapped cannot be overstated.

When my son had a devastating accident that left him immobile for an extended period, we were both discouraged by how the most mundane tasks, dressing for example, took excruciatingly long to accomplish.

Limp, heavy limbs are uncooperative, so that what once took only a minute or two suddenly required an hour to achieve. I wondered how long it had taken this elder man to bathe his wife, apply her makeup so carefully, choose her Sunday dress, decorate her with earrings and perfume, and place her in the car to meet her Savior. My thoughts returned to the lessons of the morning, and tears welled.

The ancients did not have access to baths the way we do today. They washed in communal baths, little more than small, shallow pools. Singles bathed in separate baths according to gender, but the old married folk bathed together, and it was the custom for a husband to bathe his wife.

It was with this knowledge that St. Paul wrote, “Husbands, love your wives, as Christ loved the church and gave himself up for her, that he might sanctify her, having cleansed her by the washing [laver] of water with the word, that he might present the church to himself in splendor, without spot or wrinkle or any such thing, that she might be holy and without blemish” (Ephesians 5:25-27).

This precious man, by bathing his wife in sacrificial love, baptizing her in and through his gentle, deliberate care, is one of the most incarnate examples of Christ I have ever witnessed. As a woman and a wife, I know there is no man we respect more than one who sacrifices when it is in our and our children’s best interest to do so.

I know the inherent authority these sacrifices exert, and that we wives are powerless to resist them. We simply fall at the feet, like the Magdalene, of One who loves us so blatantly.

I know that these sacrifices grow us as wives, mothers, and women, and they give us the spiritual space to become what God intended us to be, to grow into holiness. This is a husband’s privilege as the priest of his domestic church. It is cleansing and powerful, and it is the work of Christ.

His bride of many years submits in humble charity to the frustration and sufferings to which she has been called. It is always difficult to submit to God’s care through a husband when feeling helpless and weak at his hands, but she looks silently into her husband’s intimate gaze, leans into his presence, his gentle touch, the things he whispers in her ear, telling everyone with an eye to see that her submission is a labor of thankful, tender joy.

Because it is so real, and raw, and tender, this man’s sacrificial love for his wife, and her submission to it, are together the most stunning illustration of the mystery St. Paul conveys in Ephesians that I have personally ever seen. The glory of it draws me in every week.

Their mutual submission to one another in marriage is an incarnation of the crowning scriptural image of Christ and the Church. Through him, in him, and with him it is our privilege to submit to being bathed, dressed, decorated, and cherished, through a sacrifice foreshadowed in the Old Testament tabernacle furniture, for all eternity.

For details on how the Old Testament altar and laver further foreshadow Catholicism, see the book and study, Fulfilled: Uncovering the Biblical Foundations of Catholicism.

Ephesians: A Letter to the Children of God

My Questions and Desires Fulfilled in the Church