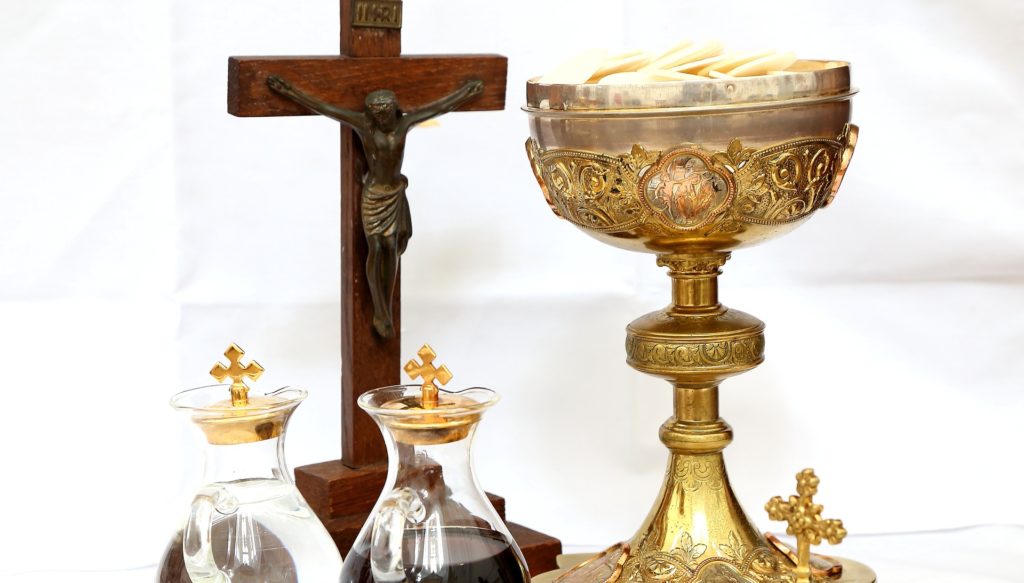 When God first began teaching me about suffering, I was a young, non-Catholic, and found the whole subject completely depressing. As a rule, most non-Catholics have no theology of suffering. I, personally, had no handle on the glory of suffering, and using those two words in the same sentence seemed, well, stupid, honestly. I wanted the Gospel to be health and wealth and prosperity.

My analytical mind works at extremes, and I began frantically planning for the worst case scenario, imagining the innumerable excruciating ways one could be “crucified with Christ” (Galatians 2:20).

Since I was a Bible geek, it was Revelation 2:8-10 that God used to confront me with my fear, as the church in Smyrna was also in danger of the fear of suffering. Jesus personally encourages them in the midst of severe persecution and poverty.

Their works had made them spiritually rich, he said, yet they were about to suffer additional testing by Satan as a result. He adds, “Be faithful unto death, and I will give you the crown of life.” In other words, “You’re doing great! Now do it until it kills you and I’ll reward you!”

These remarks seemed very flippant to me, and were the cause of my fear. Jesus appeared completely oblivious to, or at least unaffected by, their total humiliation and degradation, and I secretly felt I shared Smyrna’s experience.

Wasn’t God always silent and unreachable, asleep-in-the-boat, just when I really needed him? As conquered as the Christians in Smyrna already were, he never intervened, and they were never visibly rewarded for their remarkable faith.

Instead, they earned new sufferings in the midst of old ones and encouragement to simply take some more. This too, seemed to parallel my own life, and it seemed to me as though God did not really care that we suffer; rather, it was simply expected, and that hurt me, as I experienced some things in my childhood that were still very painful. I expressed this hurt to the Lord, and he answered me with an extraordinary thought.

By God’s direction, Old Testament kings and priests were anointed for service with anointing oil poured from a ram’s horn, symbolic and indicative of their anointing by the Holy Spirit for special service to him. The priests were instructed to fling this same oil all over the furniture and instruments in the tabernacle to consecrate, or set aside for special use, everything connected with worshiping God.

This ritual is significant because the presence of the Lord would then descend into the prepared tabernacle. So in a sense, the presence of the Living God, and his servants, were to be anointed with this aromatic oil. Upon penalty of death, the priests were instructed against anointing lay men, making any other like it, or using it for anything else, in order to emphasize the “otherness” of being set aside for God’s particular use.

Exodus 30:22-33 gives us the divine formula for the holy anointing oil used in the Old Testament tabernacle. God’s specific recipe included scenting by highly skilled perfumers, with balsams, of which a primary ingredient was myrrh.

Myrrh was also mixed and used in perfumed oils and lotions that were used on the skin for purification (Esther 2:12). It was outrageously expensive, and so a lavish and precious commodity; but it was also bitter.

In Ruth 1:20-21, Naomi took the new name Mara, similar to myrrh, to designate the “bitterness” of her trials. In Luke 2:34-35 we meet another woman with a name derived from Mara, who experienced unprecedented bitterness. Only the Mother of Jesus could truly understand the irony of this name.

Myrrh appears notably in the New Testament too. Each reference to this plant extract alludes to Jesus either directly or indirectly. At Jesus’ birth, the wise men presented him with treasures of gold, frankincense, and myrrh (Matthew 2:11).

While on the Cross, Jesus was offered, though he refused it, a mixture of wine and myrrh as an opiate to deaden his excruciating pain (Mark 15:23). After his death, myrrh was included in the embalming spices that prepared his body for burial (John 19:39) on the anointing stone that still rests near the foot of the Cross in the Church of the Holy Sepulcher in the Holy Land.

As the presence of God was covered in this strange ointment in the Old Testament tabernacle, seemingly, Jesus too, would be particularly set aside and anointed with this oil, as prophetically designated by the title “The Christ,” or, “The Anointed One.”

Interestingly, as Jesus sweated blood that Good Friday, as his soul was crushed in the Garden of Gethsemane on the Mount of Olives under the olive trees, while he prepared for his Passion, The Anointed One prayed in the place of the “oil press”: Gethsemane means crushed, or oil press.

Ironically, at each of the three most significant events in Jesus’ life myrrh was present, yet it is not spoken of again in the Scriptures until it reappears in reference to the suffering church in Smyrna in the Book of Revelation. The name “Smyrna” means “myrrh.”

Myrrh was expensive, fragrant, and bitter, as it was a symbol of suffering and death, and God put it to stunning use in the holy anointing oil in the Old Testament, as if to say “I must be covered in this suffering, as must everything that serves me.”

The presence of the Father in the tabernacle was awash in the bitterness of suffering; at his quiet birth, the holy infant was presented with the same prophetic gift; on the bitter Cross, holding the eyes of his suffering mother, myrrh appeared; his body, overcome, was bathed in it for burial; and poignantly, the church in Smyrna, in existence through the Holy Spirit, was awash in the holy anointing oil of aromatic suffering and death.

These are the Holy Trinity in the perfect unity of redemptive suffering.

Jesus does not diminish, in any way, what we endure. Our suffering is so precious, he collects and preserves our tears in a bottle (Psalm 56:8). He is steeped in suffering and identifies with it as the ultimate Suffering Servant.

I have been set apart and called to service by virtue of my anointing at confirmation. What I was invited to accept, and ultimately to embrace, is that like the Holy Trinity I worship, I must also be awash in the anointing oil of suffering.

The Church in Smyrna knew that there is often no earthly glory in obedience. It is only for the poor in spirit. But victory, peace, and reward await, in Christ: “I have said this to you, that in me you may have peace. In the world you will have tribulation; but be of good cheer, I have overcome the world” (John 16:33).

For more information on this topic, see Fulfilled: Uncovering the Biblical Foundations of Catholicism.

The Tomb Is a Womb: A Good Friday Reflection
Preparing to Participate in Christ’s Passion This Lent
‘Who Do You Say I Am?’: Jesus in Matthew 16:15
Visiting Mary’s Final Earthly Home in Turkey
Has Ascension's free media strengthened your faith?
You can now offer ongoing support for this content with a recurring gift.
Support Ascension