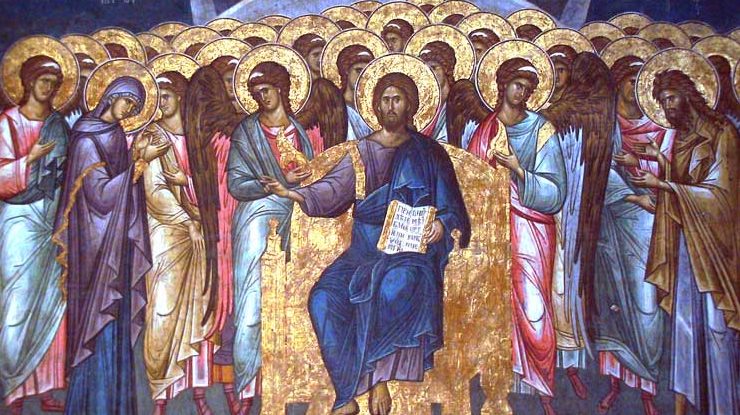 With the Christmas season over, and finding ourselves in a relatively quiet time before Lent starts, I think it’s a good time for us to reflect on a very specific aspect of the Incarnation. The Incarnation, that is, God appearing on earth in the flesh, is the single-most important event in human history. This is the reason why Christmas is such a huge celebration in the Church, second only to the Holy Day of Easter where our Lord conquered death once and for all. 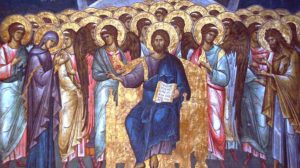 But here’s what I propose we focus on during these few weeks of Ordinary Time that we have before we enter the penitential season of Lent: if God became man for our sake, then we should also reflect on the fact that, as sons and daughters of God through baptism, we are made to become like God. Now this might strike you as a bit confusing. How exactly can humans become like God? Luckily for us, we have nearly 2,000 years of Catholic tradition to assist us in figuring out the answer to this important question.

Keep in mind, when I say that humans were made to become like God, I’m not putting forth some kind of new age pantheism. That is precisely the wrong way of looking at things. For such people, “God” is seen as more of a nebulous force than an actual person. At death, humans cast off their bodies, and if they’ve reached an “enlightened state” they dissolve into “the One”. Everyone, and everything for that matter, becomes God. That’s why there are a number of new age practitioners who believe they can encounter “God” in a sunset or in a quiet forest. This is similar to the worldview the author of the popular short story “The Egg” puts forth. The thought that “all is one, and one is all” is certainly not what we’re talking about here. Nor are we talking about the Mormon doctrine of “exaltation”, where it’s believed that men will literally become gods. This has never been taught in Christianity at any point. So now that we know what becoming like God is not, let’s explore what Christians for two millennia have actually meant when reflecting on this topic.

The early Christians had a specific name for this process of becoming more like God. It was (and still is) called “theosis”. We sometimes see this rendered as “divinization” or “deification” in Western Christianity, but the three terms all describe the same thing. St. Athanasius puts it very succinctly: “God became man so that man might become God.” The Early Church Fathers found the roots of this concept of theosis in Sacred Scripture:

“His divine power has granted to us all things that pertain to life and godliness, through the knowledge of him who called us to his own glory and excellence, by which he has granted to us his precious and very great promises, so that through them you may escape from the corruption that is in the world because of passion, and become partakers of the divine nature.” (2 Peter 1:3-4)

If you crack open the Catechism of the Catholic Church (CCC) to its first page, you’ll see that theosis is at the heart of Christian life: “[W]hen the fullness of time had come, God sent his Son as Redeemer and Savior. In his Son and through him, he invites men to become, in the Holy Spirit, his adopted children and thus heirs of his blessed life.” (CCC 1)

By virtue of our baptism, we become children of God, our Father. As is stressed time and time again in the Gospels, if we are faithful to God we will receive an inheritance. That inheritance is, of course, eternal life, but as we get closer and closer to God in that spiritual journey, we also become more and more like him. The saints are deeply aware of this; CCC 460 quotes three of those saints in quick succession, and they give us a great look into what theosis or divinization entails:

“The Word became flesh to make us ‘partakers of the divine nature’: ‘For this is why the Word became man, and the Son of God became the Son of man: so that man, by entering into communion with the Word and thus receiving divine sonship, might become a son of God.’ ‘For the Son of God became man so that we might become God.’ ‘The only-begotten Son of God, wanting to make us sharers in his divinity, assumed our nature, so that he, made man, might make men gods.’”

It has to be made clear, however, that we’re not talking about men and women adding anything to God’s nature. That is, we don’t become part of the Godhead; that will always be made up of just three Persons. In Eastern Christianity, both Catholic and Orthodox, the distinction is made between the essence and what is called the “energies” of God. The Greek word for essence is ousia. Those that have studied Christian history, specifically during the time when Arianism was popular, might notice that ousia looks a bit familiar. That’s because a form of this word was used to describe the relation between the Father and the Son in the Nicene Creed: homoousios. That is, the Father and the Son are of the same essence, or substance. In English, this specific word is translated as “consubstantial” in the Nicene Creed. So when we as Christians say that we are becoming partakers in the divine nature, we don’t claim that we will share in God’s essence to the same level that the Father and the Son do. We instead recognize that, by the help of God’s grace, we don’t become absorbed into God, or actually become God, but that we become like God.

Think about it. This is why purgatory is, in most cases, necessary for all men. It’s no coincidence that in Eastern Christianity, the state of purification that takes place after death is explicitly called the “final theosis”. We need to be purified of all our sinful nature before we can enter the kingdom of heaven, because as Scripture reminds, nothing unclean shall enter heaven. (cf. Revelation 21:27). God, by his nature, is sinless. Theosis takes place both while living on earth, and after we die. If we die without fully removing all that sin from our souls, then we must complete that purification in purgatory to become more like God.

Wisdom from the East

Also, remember that our Lord returned to earth after his resurrection in his glorified body. We, too, by becoming partakers in the divine nature, will receive a glorified body as well. Partaking in the divine nature doesn’t mean we will share God’s essence, but that, in being connected and grafted onto the True Vine, we will be in much closer union with our Lord than we ever could hope to be apart from him. Baptism has a real effect on us. It starts that process of theosis, and each person finds themselves at a different level of the process at any given moment of their lives. The Catechism has so much more to say on this, but not the Catechism you’re thinking of.

Since the concept of theosis has been fleshed out in such great detail by our Byzantine brethren, we’d do well to look at the “Catechism of the Ukrainian-Greek Catholic Church: Christ Our Pascha” (CUGCC). Although it was released in 2011, the CUGCC wasn’t translated into English until 2016. This catechism is a treasure trove that enriches the entire universal Church, and it speaks at length about theosis and divinization. In its section on “Humankind–in the Image and Likeness of God”, we see that:

“Every human being that comes into the world is called to grow in likeness to God–to achieve divinization (also known as deification, the process of theosis) … This partaking in God’s nature constitutes human happiness. Likeness to God can be attained by us only by free choice and assent, and by cooperation with God’s grace.” (CUGCC 124)

A little later in this catechism, the section on “The Spiritual Life and Divinization” goes even deeper into the concrete steps that go into living out this divinization:

“In the tradition of the Holy Fathers, the primary goal of the Christian’s spiritual life is active and dynamic participation in the divine life. Such participation is called divinization (theosis in Greek). … For the Holy Fathers, spiritual struggle is the primary path to divinization. The first (“purgative”) stage of this spiritual asceticism is purification from passions and passionate intentions through the power and grace of the Holy Spirit. The second (“illuminative”) stage is the illumination of the mind and contemplation or vision of God. The third (“unitive”) stage is the actual attainment of divinization.

“The mystical and dynamic process of divinization takes place in the Body of Christ, which is the Church. A Christian is a living member of Christ’s divinized Body to the extent in which he or she fully participates in the Church’s mystical life. In divinization, God’s life becomes our life and our life becomes divinized. The unique mission of the Church is to be the place and path of divinization. This mission manifests itself in the proclamation of the good news of God’s Word, in the Holy Mysteries [Sacraments], in prayer and worship, and in the moral and ascetical life.

“Divinization is the meeting of God and the human person in faith. … Interior purification, a virtuous life, and life in holiness are the primary conditions for divinization, for union with him who is the Source of Holiness, Purity, and Perfection.” (CUGCC 850, 852-854)

It’s clear that this form of divinization beats anything that our new age or Mormon friends might ask us to subscribe to. Instead of being absorbed into some impersonal “life force”, we instead get to share in a personal relationship with the Creator of the entire universe. This is true divinization. The very nature of having a personal relationship with God makes what Christianity offers so much better than what’s offered in the various mistaken notions of divinization and theosis.

If you’re striving to lead a life of holiness, then you’re already going through the process of theosis. Whether or not your “final theosis” will take place here on earth or in purgatory is yet to be determined, but we can be assured that God will give us the grace to continue in this partaking of his divine nature every step of the way, so long as we cooperate with him, and one day we will finally see him face to face (cf. 1 Corinthians 13:12).

Holiness—in the Bible and Beyond

Saints in the Making
How a Chicken Leg Can Teach Us Holiness
The New Age Movement and Where It Came From
The Roundup: New Videos, Podcasts, and Articles
Has Ascension's free media strengthened your faith?
You can now offer ongoing support for this content with a recurring gift.
Support Ascension