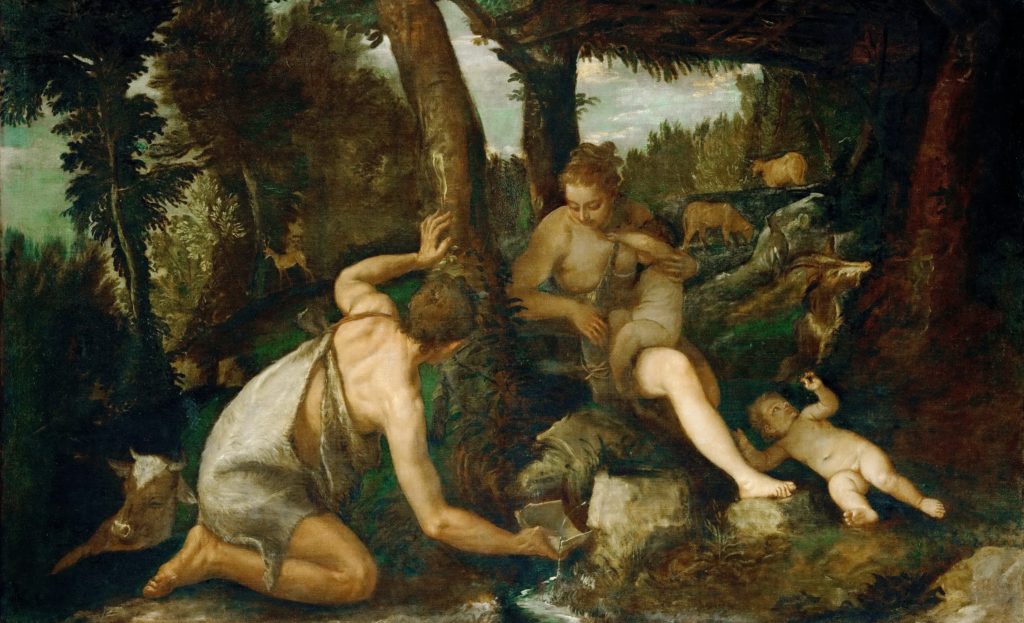 Over a decade before he published The Lion, the Witch, and the Wardrobe, C.S. Lewis penned the first of another series of allegorical tales, Out of the Silent Planet, part of a three volume series now known as the Space Trilogy. This series, like his later Chronicles of Narnia, contained a fascinating plot on its own, but also explored deep theological questions (Regarding this work, Lewis himself wrote of being able to smuggle theology into people’s minds through popular fiction). While ostensibly about traveling to other planets with intelligent life, Lewis actually delves into the theology of humans’ fall from grace, looking at temptation from different points of view. In the first book, readers encounter a planet that has already faced it’s version of the serpent, and passed its test, so it is still in an Eden-like state. The second takes place in a more nascent world; we see creatures facing their own chance to embrace or refuse evil for the first time. The final book returns to Earth, where we see sinful and deadly results of The Fall. 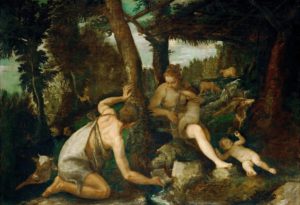 These scenarios, while hypothetical on Lewis’ part, reveal a very real truth with theological consequence. What would be “original sin” on one planet would not apply to another. But we do not live on Venus or Mars; nor in the pages of a novel (Although, if we do, the author has a great sense of humor in having my character write that sentence). So how does this apply to our world, our Fall, our Adam and Eve? Looking at this in the context of C. S. Lewis’ books about different planets, you may already see the importance. We believe that our fallen nature comes from the Original Sin of our ancestors. If man had more than one ancestor, what does this say about Original Sin? Such a theological question became necessary beginning in the sixteenth century when some theorists began to spread a theory called Polygenism.

The polygenists believed that humans developed or evolved in different places and at different times. In the eighteenth and nineteenth century, this line of thought was developed even further, and was used to explain physical characteristics such as skin color and other differences between races. Not only had many of the scientific minds of this time embraced this, but in Europe, even most of the the general public believed it to be true. One can wonder if this is partially because this viewpoint seemed to contradict Genesis. During the Age of the Enlightenment beliefs contradicting religion seemed to, by this very fact, receive bonus credibility points. Also, perhaps the acceptance even among the masses was precisely because, in an age of slavery on one side of the Atlantic and European dominance on the other, it allowed people a justification of their biases.

As this is not a sociology blog, we will leave such suppositions where they are, and point out that most modern scientists no longer believe in polygenism, but do believe humans developed from a common set of ancestors. These same scientists, though, also discuss evolution. Of course, this is also not a science blog. Some, though, have similar questions to those that sprung from the polygenist thought. If there was a creature from which man evolved, what was its life like? Did that being sin? If so, was it his sin, or his human descendants, who were involved in The Fall? This is a Catholic blog about Scripture. So let us look at what Scripture and the Church teach us about Adam and Eve.

Adam and Eve in Genesis

To begin with, who are Adam and Eve? In one of this blog’s most popular posts, Sarah Christmyer looked at the question of the two seemingly inconsistent creation stories in Genesis. Part of that post offers context for why Adam and Eve’s identity matter. As Christmyer points out, in the story of Adam and Eve, “Events are arranged to show truth about humanity in relationship to God, the animals, and the world.” Taking this into consideration, what can we learn from the beginning of Genesis about humanity, God, and relationships?

One especially important aspect of a relationship is a name. Names are seen early and often in Genesis’ creation stories: God creates something, and then names it. He creates light, and calls it “day” (1:5), he creates a place for the waters, and calls it “sea” (1:10), and so on. This tells us that names are important. When God created man, out of the ground, he was called Adam (which means “man” in Hebrew; from adamah, Hebrew for “ground”). But at this point, the situation changed. Since mankind is God’s magnum opus, made in his image and likeness, God allows Adam to begin naming the living creatures. This is how we find out Eve’s name, as Adam, in Genesis 3:21 notes that she is the “mother of all the living” (The Hebrew word for Eve, Hawah, was similar to the word for “living”).

So, if the point of the Adam and Eve creation story was not so much to discuss a scientific history, but to talk about humanity in relationship to God and the world, what can we tell from the names of our first parents? We know that one was a man made from the ground, and the other was the mother of all living things. In other words, God tells us in Genesis that we do, in fact, have one set of parents. There was one first man, made in the image of God, and one woman who was the mother of all living humans, including you and I.

Church Teaching on Our First Parents

The Church has also weighed in on these matters. In his encyclical Humani Generis, Pope Pius XII addressed several issues, including the creation of man, polygenism and the first chapters of Genesis. What does the encyclical say about evolution? After discussing the importances of scientists’ role to science and theologians to theology, paragraph 36 states:

Therefore, if there was a living creature that evolved into a human (and it is not wrong to believe or not believe such a creature existed), when God created man, he also created a soul. In other words, something at that point was different from anything that came before, and set it apart from all God’s other creations. At that point, we were made in his image and likeness.

However, was there only one Adam? Pius also addresses this. In regards to polygenism, he states:

Pius’ context for this, stated in the same paragraph, focuses precisely on the inherited nature of Original Sin.

Regarding Genesis, and whether or not it can be taken literally, Humani Generis, in the very next paragraph, states “the first eleven chapters of Genesis, although properly speaking not conforming to the historical method used by the best Greek and Latin writers or by competent authors of our time, do nevertheless pertain to history in a true sense,” and then goes on to discuss that if some of the truth contained in it came not from the scientific method, “it must never be forgotten that they did so with the help of divine inspiration, through which they were rendered immune from any error in selecting and evaluating those documents.” In other words, what we read in Scripture is true, and free from error. We may or may not understand the completeness of this truth, but this is only because our minds are limited by the brain in our bodies.

There is a final sticking point. We have established that both science and the Church teach that humans share common parents. This leads to another struggle. Does this mean the earth was propagated by way of incest? Did God, when he told men and women to “Be fruitful and multiply, and fill the earth,” command them to sin? The short answer to this last question is “no.” God has never commanded us to sin. Now, as to the first question, one way to look at the question is to read about the Church’s position on Consanguinity, as a detriment to marriage.

In the article linked above, Richard Burtsell discusses the difference between types of family relationships, in how they relate to the inability to marry. He also discusses this very issue of the early population of the earth at the time of Adam and Eve.

First of all, we know that marriage between a direct line of generations (such as father and daughter) is forbidden, not just by Canon Law, but by natural law as well. The very reason why is given right in the Genesis creation story: “Therefore a man leaves his father and his mother and cleaves to his wife, and they become one flesh.” Genesis itself states that a marriage requires separating from the parents. However, this only applies to parents. The Bible had not (yet) mentioned anything about prohibition of incest occurring between siblings or other relatives. This prohibition was, in fact, codified later, in the Mosaic law, as written in Leviticus. However, prior to the Mosaic law, such a prohibition was not expressly forbidden. In fact we do know specifically that (also prior to Leviticus) Abraham married Sarah who was his half-sister by his father (from a different mother).

Does this mean Adam and Eve also had unnamed daughters with whom Cain, Abel, and Seth procreated?

Not necessarily, but were this to have occurred, it would not be, in itself, sinful at that time. Burtsell, in that same article from the Catholic Encyclopedia, points out what we already know about what must have happened next “It is readily understood that … some effort would soon be made (in the interest of the social welfare) to prevent early corruption within the close family circle by placing a bar to the hope of marriage. Hence among all peoples there has arisen a natural repugnance to the marriage of brother and sister.” This repugnance was later codified in the Mosaic Law, and remains in most cultures, including the Catholic laws of marriage.

All this having been said, what are the essential truths a Catholic needs to believe about Adam and Eve from Genesis? We know that human beings were created by God. We know that what was created before that was not as special (as God named those things), but that we were made in his image and likeness (as shown by Adam’s naming of creatures. We also know that there was just one Adam and one Eve. The same type of soul that God gave them, (and no previous creatures) making them in his image and likeness, is in each of us, as all men and women today can trace themselves back to them. Similarly, though we know also that they sinned, and that this fallen nature is also passed onto each and everyone of us. Most importantly, though, we now know now, blessed by revelation, that God had a plan to use Man to reverse that sin, and bring Adam and Eve back to paradise with him. He has that same plan for us, as well.

A Catholic Response to the Extraterrestrial Question

Why Are There Two Different Accounts of Creation?

A Catholic View of Shame and Modesty