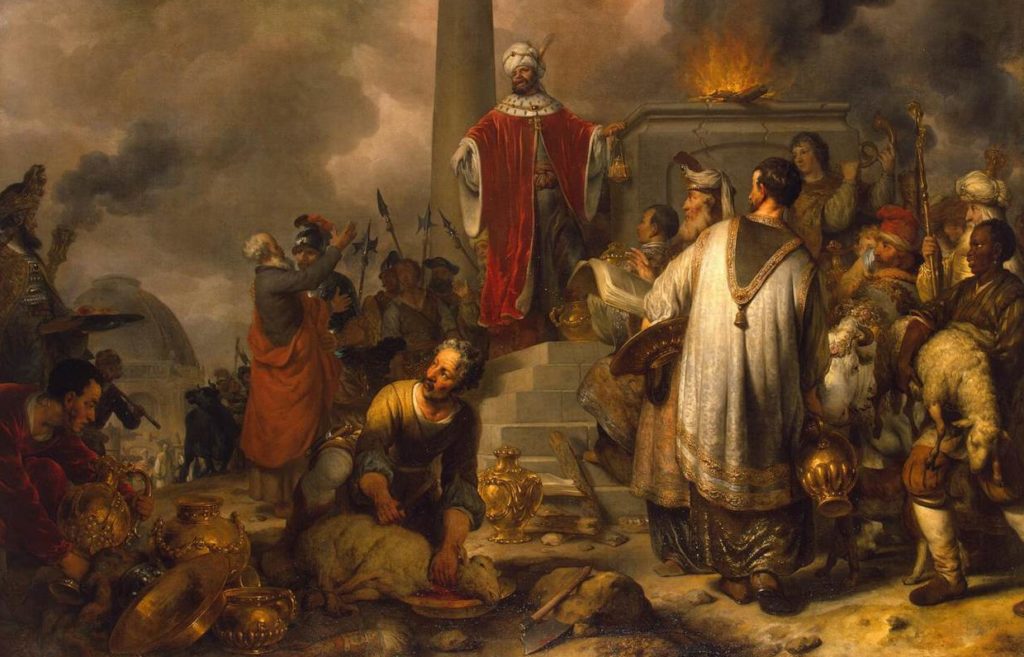 As a Protestant, I began researching the Reformation under duress of the repeating cycle of division and church splitting I experienced, both as a ministry leader and church member. During that research I was struck by two things: Martin Luther’s father wound and the similarities between the Protestant split and the Great Sin of Israel.

Division, the Great Sin of Israel

King David moved the Ark, the center of Old Testament worship, to the southern city of Jerusalem where he intended to build a permanent temple for it (1 Kings 11-14). Although this move lent a sense of permanence and security to Hebrew worship, it also somewhat alienated the Northern tribes. 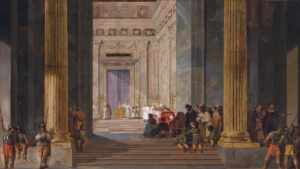 After construction was complete and Solomon died, the people approached Solomon’s son, Rehoboam, with a plea for tax easement through a leader/mediator named Jeroboam. Although advised by his father’s cabinet to grant their request, young Rehoboam insulted the people with a threat to increase their taxes even more, exacerbating the tensions between tribes to the breaking point (1 Kings 12).

Although the split was prophesied as a judgment on Solomon for sin (1 Kings 11:9-13; 12:24), the effect of Rehoboam’s pride was the  Divided Kingdom. The split and its resulting apostasy were thereafter known by the prophets in the Old Testament as the most grievous sin of Israel.

Rather than waiting on God to bring about necessary reform, Jeroboam took matters into his own hands, crowning himself without divine anointing from priest or prophet. The holy nation was split in two, Northern Israel ruled by illegitimate Jeroboam, and Southern Judah ruled by Rehoboam.

By following Jeroboam, Israel’s rebellion was its own destruction. Seeking to establish a presence in the north and distract the people from the glories of the temple in Jerusalem, Jeroboam seceded with ten tribes. Capitalizing on the majority, an opportunistic Jeroboam took the ancestral name “Israel,” one that had traditionally meant the entire Hebrew race, as the designation for the new Northern Kingdom.

Thereafter, in the Scriptures, the name “Israel” came to mean the Northern Kingdom, while the term “Jews” meant only the Southern Kingdom of Judah, as illustrated in the writings of the prophets and St. Paul’s letter to the Romans.

Once committed to this sinful direction, Jeroboam’s descent was swift. To further strengthen his new kingdom, he fortified classic religious sites in the north and set up places of worship for the people to circumvent the necessity for travel to Jerusalem. Citing the most notorious act of apostasy in Jewish history as precedent, Jeroboam brought religion to the people.

He erected statues of golden calves, ordained fake feasts, installed illegitimate priests, and instituted idolatrous sacrifices.This deliberate establishment of a heterodox, idolatrous, and apostate doctrine as official practice for the Northern Kingdom resulted in religious confusion that prevailed even through the time of Jesus. 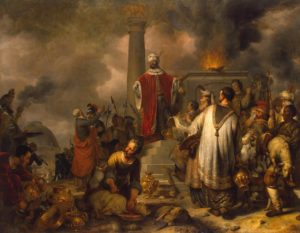 As punishment, both political kingdoms eventually fell to other nations due to religious and political instability and ceased to exist, but the promised and prophesied Messiah would come from the tribal remnant of orthodox Southern Judah, centered in the region of Judea and Pharisaical worship.

The northern kingdom of Israel later became the Galilean and Samaritan regions. Samaria was situated between Galilee and Judea and was the natural route for traveling between them.

Because of their regional and doctrinal separation from pure Pharisaism and intermarriages with surrounding Canaanites, Samaritans became known derisively as religious “half-breeds,” contaminated by foreign blood and false worship in a religion and race that by Old Testament Law condemned both as exclusions for true Israelite racial identity.

These separations further led Samaritans to accept only the first five books of the Old Testament as authoritative Scripture, and they changed occasional wording of their books of the Law to give preference to the ancient holy sites upon which their idolatrous altars were constructed, in an attempt to legitimize their worship.

Although in other respects Samaritans promoted their liturgies, rituals, and beliefs as orthodox, and slanted their version of the Pentateuch to reflect these, the Scriptures remained very similar; the Samaritans retained, at least, a belief in the One True God and the three main feasts prescribed in the Law.

With this context we are better able to understand Jesus’ exchange with the woman at the well in John 4. Although it was Jewish practice to avoid the region when traveling to Jerusalem, Jesus goes there deliberately; he takes the direct route and encounters a woman drawing water.

Perceiving he is a prophet, she asks for a pronouncement of judgment on the legitimacy of Samaritan worship, to which Jesus replies, “You worship what you do not know; we worship what we know, for salvation is from the Jews.”

As a Protestant who knew Old Testament history, this statement returned to stun me as I researched Martin Luther’s rebellion and split from the Catholic Church in order to discover whether the Reformation was legitimate.

The writings of Church history prove that Catholic doctrine remained the same from the apostles to Luther, even if holiness and practice among the hierarchy degenerated. Jesus’ comment to the Samaritan woman stunned me because I recognized that salvation is of the Catholic Church, if for no other reason than Christianity first existed in her; Protestantism exists as an offshoot. This parallels Jesus’ statement to the Samaritan woman that “salvation is of the Jews,” a sentiment St. Paul expands in Romans 11.

That salvation is of the Catholic Church surprises no one who knows history and submits to scriptural teachings on authority. The Church has maintained this position from the beginning.

I state the obvious here, because I once told someone that the Christian Church was Catholic until Luther, to which they replied, “Well that’s just your interpretation.” It is not interpretation at all; this is historical fact, and it is a history that repeats in frightening detail the Old Testament kingdom split.

Martin Luther led a secession in the early sixteenth century that was eerily similar to Jeroboam’s. Like Jeroboam, Luther made a plea for fairness, but when the plea was rejected he crossed the line and retaliated by denouncing Church authority entirely. The heretical doctrines that resulted mimicked Samaritan religion with similar results, even to the exclusion and changing of parts of Holy Scripture.

Laboring under a personal spiritual conflict between faith and works proceeding from a father wound, Luther directly opposed the historical Catholic Church when he preached “faith alone” rather than grace alone. The Church, as the guardian of the Deposit of Faith, stringently defended historical Christianity against Luther’s new teachings.

These conflicts and blatant carnality in the Church led Luther to despise and reject the Catholic hierarchy that opposed his teaching. Like the Samaritans, Luther rejected and isolated canonical Old Testament books that supported historical, authoritative teachings, placing such Scriptures in an appendix which became known as the Deuterocanon.

He also threatened to completely remove New Testament books conflicting with his new interpretation of the gospel, specifically James, Hebrews, and Revelation. These he also gathered and isolated to the end of the New Testament.

Additionally like the Samaritans, he went so far as to mistranslate texts to suit the new teachings, such as inserting the word alone in Romans 3:28: “For we hold that a man is justified by faith alone apart from works of law.”

This is very important, because while most contemporary Protestant translations no longer retain Martin’s “alone” in Romans 3:28, all of Protestantism as a philosophy does.

“Sola Scriptura,” and “Sola Fide” (Scripture alone and faith alone) are the cry and foundation of Protestant doctrine and faith, and what followed was certainly no reform of the Church, but a splintering into sectarianism, factions, and division that Jesus, the apostles, and the Church Fathers all categorically denounce (John 17:17-23; 1 Corinthians 1:10-17; 3:1-4; Titus 3:9-11).

Although Luther certainly had legitimate concerns, as did Jeroboam, institutional scandal and infidelity to God in the hierarchy never nullifies the faithfulness and purposes of God in and through religious authority (Romans 3:3-4; Matthew 8:5-13).

This is why Jesus never mounted a rebellion against the Jews or the Romans. He knew both were fulfilling God’s purposes, and that God’s judgment would occur at his hand at the proper time.

Jesus simply witnessed to the Truth, accepting the deadly consequences. He waited for God’s deliverance, judgment, and reform, which swiftly came with 70 AD at the complete destruction of the temple and its sacrifices.

This is the example Martin Luther should have followed. Instead, he deliberately and presumptuously taught “strange doctrines” even after the Church corrected him, as was her duty as the guardian of the Deposit of Faith.

As Luther garnered support to justify and defend his errors, the invention of the printing press and political expediency of King Henry VIII finished the separation.

I am not implying in any way that Protestants do not “have” the Holy Spirit, but like the Samaritanism it resembles, Protestantism does not possess the fullness of the Faith. It cannot by its very nature.

Although God mysteriously accomplishes his perfect will through all things, turning even malicious and willful sin to his peoples’ advantage, “shall we sin so that grace will abound? Absolutely not! How can we who died to sin still live in it?” (Romans 6:1-2).

God never condoned the illegitimate split of the Davidic Kingdom as it occurred, nor could he, for he is a lover and the creator of authority and unity as the keeper of truth and order. The Samaritanism that resulted was pronounced illegitimate by Jesus himself. Likewise, he does not condone the illegitimate Protestant split for the same reasons.

This is exactly why I embraced the historical Catholic Faith as my Christian inheritance. I protest no longer.

Does the Church Still Believe in Indulgences?

Did the Church Ever Sell Indulgences?