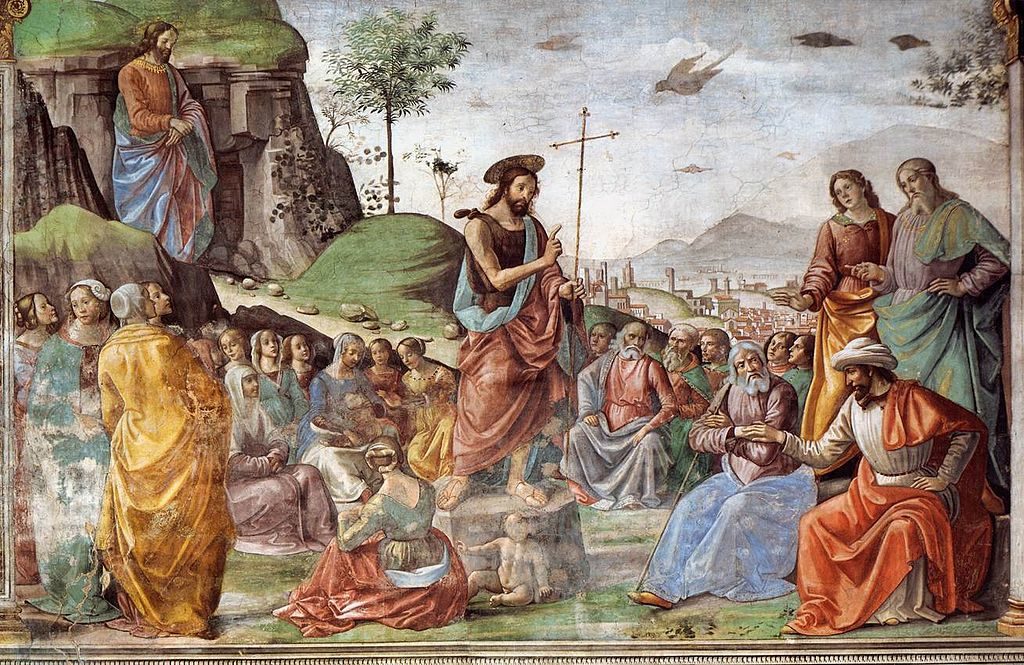 John the Baptist could not have been the reincarnation of Elijah, for the simple reason that we know that death (or the end of one’s earthly life) results in a definitive judgment—determining whether or not we are heaven bound, as the Catechism of the Catholic Church explains here: “Death puts an end to human life as the time open to either accepting or rejecting the divine grace manifested in Christ…. Each man receives his eternal retribution in his immortal soul at the very moment of his death in a particular judgment that refers his life to Christ: either entrance into the blessedness of heaven—through purification or immediately—or immediate and everlasting damnation” (CCC 1021, 1022). The Letter to Hebrews echoes this same point: “It is appointed for men to die once, and after that comes judgment” (Hebrews 9:27). The notion of reincarnation denies this finality, giving rise to endless cycles of death and reincarnate life. 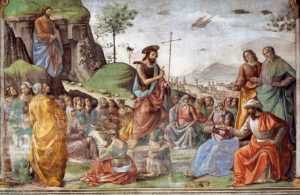 Even though Elijah technically did not die, reincarnation is not a real theological possibility, so something else must be going on with John the Baptist.

Elijah has a very important prophetic ministry, running from 1 Kings 17 to 2 Kings 2. He arises in a time of crisis under the rule of Ahab (see 1 Kings 16-22) and performs several miracles, many of which prefigure those of the Savior, Jesus Christ (e.g., he raises a widow’s son from the dead, 1 Kings 17:8-24). In fact, while it’s commonly thought that miracles are more or less “everywhere” in the Old Testament, the reality is they are very much clustered around the time of Moses and that of Elijah and Elisha (1 Kings 17-2 Kings 13).

As mentioned, Elijah is not said to die. Rather, as he passes his ministry off to his spiritual son Elisha, Elijah is taken away to heaven in a fiery chariot (2 Kings 2:11).

Because of the dynamic importance of Elijah’s work and because he did not actually die, an expectation developed among the prophets that Elijah would return as a precursor to the great definitive coming of the Lord. This is most explicit in the last of the writing prophets, the prophet Malachi, whose ministry likely dates around 450 B.C. He writes: “Behold, I will send you Elijah the prophet before the great and awesome day of the Lord” (Malachi 4:5).

Further, Malachi 3:1 is likely drawing from Isaiah 40:3, where Malachi states: “Behold, I send my messenger to prepare the way before me” (Malachi 3:1). The similarity is apparent with the Isaiah passage in the repetition of the words “prepare” and “way.” Isaiah writes: “A voice cries in the wilderness, prepare the way of the Lord” (Isaiah 40:3).

John the Baptist as the New Elijah

In fact, Mark’s Gospel begins by citing Malachi 3:1, but attributes it to Isaiah. In other words, Mark understands the Malachi passage and that of Isaiah as something of a unit, elaborating a single thread, which allows him to see both against the Isaianic backdrop: “As it is written in Isaiah the prophet, ‘Behold, I send my messenger before your face, who shall prepare your way [Malachi 3:1]; the voice of one crying in the wilderness: Prepare the way of the Lord, make his paths straight’” [Isaiah 40:3] (Mark 1:1-3).

The Gospels quote this Isaiah passage (Isaiah 40:3) in order to set the context for the ministry of John the Baptist. For example, speaking of John the Baptist, Matthew writes: “For this is he who was spoken of by the prophet Isaiah, when he said, “The voice of one crying in the wilderness: Prepare the way of the Lord” (Matthew 3:3). It’s also worth noting that John the Baptist hands off his ministry to Jesus at the Jordan River—the very same place where Elijah passed his ministry off to Elisha (see 2 Kings 2).

And Jesus himself is explicit: John the Baptist fulfills the expectation of Elijah’s return. Speaking of John the Baptist, Jesus states: “This is he of whom it is written, ‘Behold, I send my messenger before your face, who shall prepare your way before you’ [see Malachi 3:1]. Truly, I say to you, among those born of women there has arisen no one greater than John the Baptist; yet he who is least in the kingdom of heaven is greater than he. From the days of John the Baptist until now the kingdom of heaven has suffered violence…. For all the prophets and the law prophesied until John; and if you are willing to accept it, he is Elijah who is to come” (Matthew 11:11-15).

The same teaching comes out in Luke’s account of John the Baptist’s birth, namely, that John will come “in the spirit and power of Elijah” (Luke 1:17).

When Jesus utters from the Cross his famous words, “Eli, Eli, lama sabachtani” (My God, my God, why have you forsaken me?” Matthew 27:46), some in the crowd think he is calling for Elijah—because Elijah’s name in Hebrew sounds like the semitic form of “My God, my God” (“Eli, Eli”), showing us an example of the Jewish expectation of Elijah’s return. This expectation is also witnessed in the disciples’ response to Jesus’ question: “Who do men say the Son of man is?” They respond: “Some say John the Baptist, other say Elijah, and others Jeremiah or one of the prophets” (Matthew 16:13-14).

Thus, the Jewish expectation of Elijah’s return—and the expectation that his return would augur the return of the God of Israel to Zion—gives rise to the question of whether or not John the Baptist is Elijah reincarnate. While, for theological reasons, that can’t be the case, this whole discussion does imply something profound. It means that the God of Israel—YHWH—has returned to his people in and through Jesus Christ.

From the vantage point of the New Testament, there is no reason to force an overly literal reading of Elijah’s return. Rather, John the Baptist is the New Elijah—just as Jesus is the New Moses and the New David. This is a matter of typology whereby figures in the Old point to greater realities to come in the New. The Old Testament is very much a story in search of an ending, giving rise to hopes and expectations that are sometimes fulfilled in surprising and unexpected ways. In hindsight, we see what God was doing; but such matters are not nearly so clear from the other side of the veil before Christ.

Just to give one example, the Church can be understood as the Davidic Kingdom “transfigured.” That is, the Church is related to, but transcends the earthly kingdom of David. In a real way David’s kingdom foreshadows and points to the Church, as a prophetic expectation; but this fulfillment comes about in a surprising and somewhat unexpected way.

Thus, typology often functions like an analogy, which entails a “like and unlike” in terms of how it’s fulfilled in Christ. Reading the Bible from the heart of the Church means attuning ourselves to the rhythms of God’s providence and seeking to understand the divine movement of salvation—from the Old to the New, from the earthly to the heavenly, from nature to grace.

How can we grow in our ability to enter into God’s Sacred Word from the heart of the Church?

Memorial: Passion of John the Baptist

John the Baptist’s Nativity and God’s Will

Water and the Spirit in John’s Gospel